Home NEWS #Lakbayan2017 | Moro and national minorities evacuate UP Diliman campout due to... 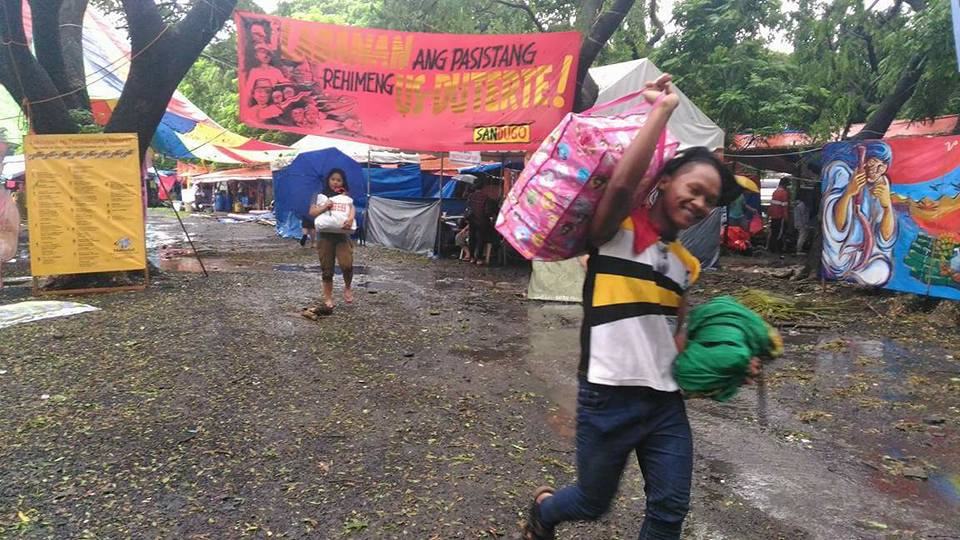 Lumad students from the Save Our Schools Network left their campout at the University of the Philippines (UP) Diliman Stud Farm to seek temporary evacuation at the UP International Center as #MaringPH heads to Metro Manila.

Heavy rains continued to pour at the campout of more than 2,500 national minorities from the evening of September 11 up to the afternoon of September 12. The Moro and indigenous peoples, who are part of the Lakbayan ng Pambansang Minorya 2017, traveled from all over the country and arrived in the national center on August 31 and have been staying in the campout provided by host UP Diliman.

UP Diliman Chancellor Michael Tan visited around 11pm of September 11 to assess the situation. At that time, he already advised the national minorities that he opened some buildings and facilities inside UP Diliman as evacuation centers should the situation worsen.

lakbayan-evac-08
September 11 evening at the campout of national minorities. Photo by KJ Dumapit.

lakbayan-evac-09
September 11 evening at the campout of national minorities. Photo by KJ Dumapit.

lakbayan-evac-10
September 11 evening at the campout of national minorities. Photo by KJ Dumapit.

The makeshift tents in the UP Diliman Stud Farm were only partly covered and some belongings and sleeping quarters have been drenched in rain. The ground has also softened and muddied, making it difficult to move around.

The rest of the Lakbayan contingent would stay in different buildings inside UP Diliman until typhoon Maring leaves the country.

The Lakbayanis are also seeking for donations like jackets, blankets, medicines, and food among other basic needs. Donations may be sent to the UP Diliman Stud Farm along C.P. Garcia Avenue, Quezon City.

Due to typhoons #MaringPH and #LanniePH, the Lakbayan ng Pambansang Minorya is in need of:

FOR DONATIONS IN KIND:
Donations may be brought to the campsite at Sitio Sandugo, UP Equine Stud Farm, C.P Garcia Ave., UP Diliman campus.
Please look for Mica Arcepeda 0943.541.8608.

With your help, we can ensure the safety and well-being of our Lakbayanis, and the success of #Lakbayan2017. Thank you for your support and solidarity!