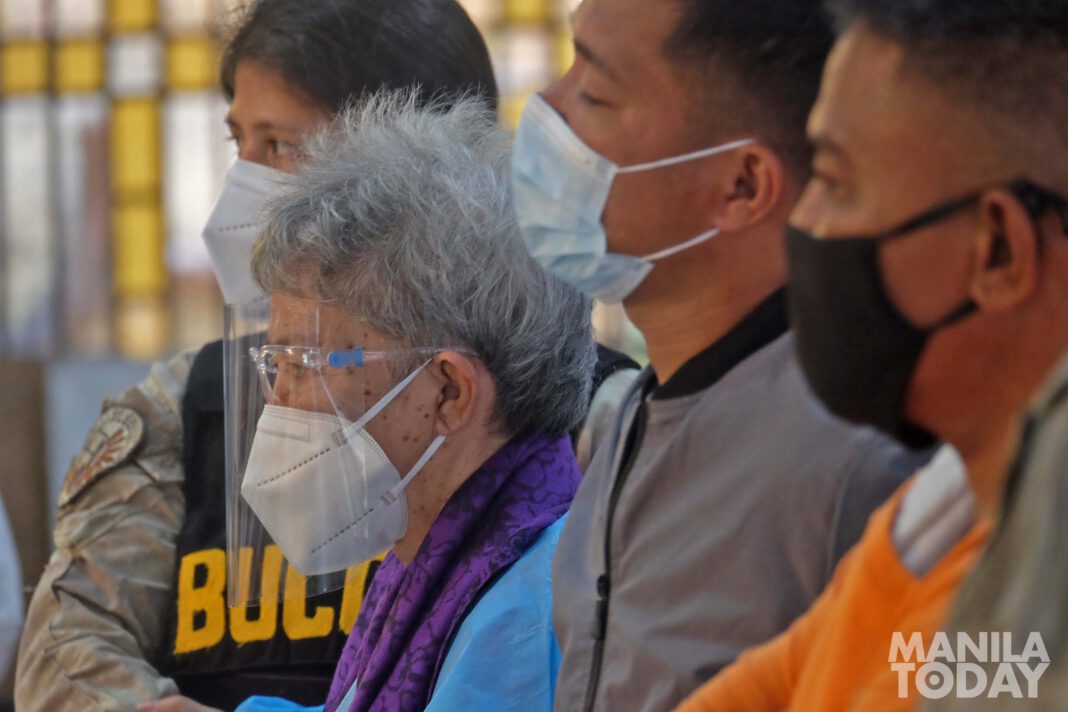 This was how Jesus Alegre sang and dedicated the 2001 Renz Verano hit song “Lorena” to wife Moreta while they were apart and whenever he used to be alone in jail.

However, Jesus would not know the end to his longing for Moreta as he succumbed to his health ailments on June 13 at 75 years old.

The couple were reunited on June 18, only as he was already laid inside a coffin. Political prisoners’ kin group Kapatid organized a wake for Jesus at the Iglesia Filipina Independiente (IFI) National Cathedral along Taft Avenue in Manila, so Moreta and their son Selman could pay their last respects.

Eleven years have passed since Jesus, Moreta, and Selman were transferred to the Bureau of Corrections (BuCor) jails in Metro Manila following their conviction. Jesus and Selman had been jailed in the National Bilibid Prison Maximum Security Compound in Muntinlupa. Moreta had been incarcerated in the Correctional Institute for Women in Mandaluyong.

The bereaved wife in blue PPE and Selman in the regimental orange uniform finally saw their padre de pamilya for a few hours of visit following news of his death. This was far from the happy reunion one could hope for the family. This is also far from the bucolic or green scenery of their hometown, their land, that could have served as the backdrop.

The three come from a family of peasants who live on fishing and tilling a piece of land for coconut and its byproducts. They were convicted of a murder charge in 2009 but had been in jail in Sagay, Negros Occidental since 2005. Two sons, also implicated in the crime, had reportedly been at large. Human rights groups asserted that the case is “trumped-up” and stemmed from a land dispute with a landlord named Avelino Gaspar who sought to usurp the patch of land tilled by the Alegres.

The elder Alegre couple had been among the oldest political prisoners in the country, and they had also been suffering from arthritis and hypertension from the time they were imprisoned. They had repeatedly sought release on humanitarian grounds. Moreta could still avail of this if any of the outstanding pleas with the Supreme Court or the Department of Justice or other government agencies could be decided in her favor.

Mother and son were escorted by BuCor personnel during their furlough. Moreta, 74, looked frail and needed a hand as she walked and moved around.

Kapatid member Medy Gonzales read the message of political prisoners of the New Bilibid Prison, recounting how Jesus would like to joke around and entertain his fellow friends.

[Despite his difficulty in speaking Tagalog and being mostly fluent in Bisaya, this did not become an obstacle to his kind treatment of other political prisoners.]

Kapatid shared that Jesus became a member of a political prisoners’ cultural organization ‘Carcel,’ organized where he was detained. Carcel also stood as the choir group for IFI church services held inside the prison.

While in the middle of a reading, prison guards pulled up Moreta from her seat to escort her out. One of the escorts confirmed that they had received an order to pull out. The mass celebrator, Fr. Dionito Cabillas, pled for Moreta to be allowed to stay for a few minutes to finish the memorial service. This was granted by her escorts.

A Monobloc chair was set up for Moreta so she could sit beside her husband’s coffin as she was unable to stand for too long. This was when she burst into tears—a release wake-goers and supporters had expected and also sought comfort within as they collectively take in and grapple with the family’s story. The story was one of injustice on top of another.

Nothing more they could do and nothing more they could say but, again, goodbye. Moreta exchanged a hug with Selman and youngest son Joemarie, who was able to attend the wake. The rest of their family in Sagay could not attend the wake. Selman was then the first to be taken away by prison guards to be sent back to jail. Moreta was next to leave. The bereaved widow was taken to an ambulance, which was part of the BuCor’s convoy to the CIW.

The remains of Jesus will be flown to his hometown in Sagay, just as Moreta requested, so Jesus could finally return home.