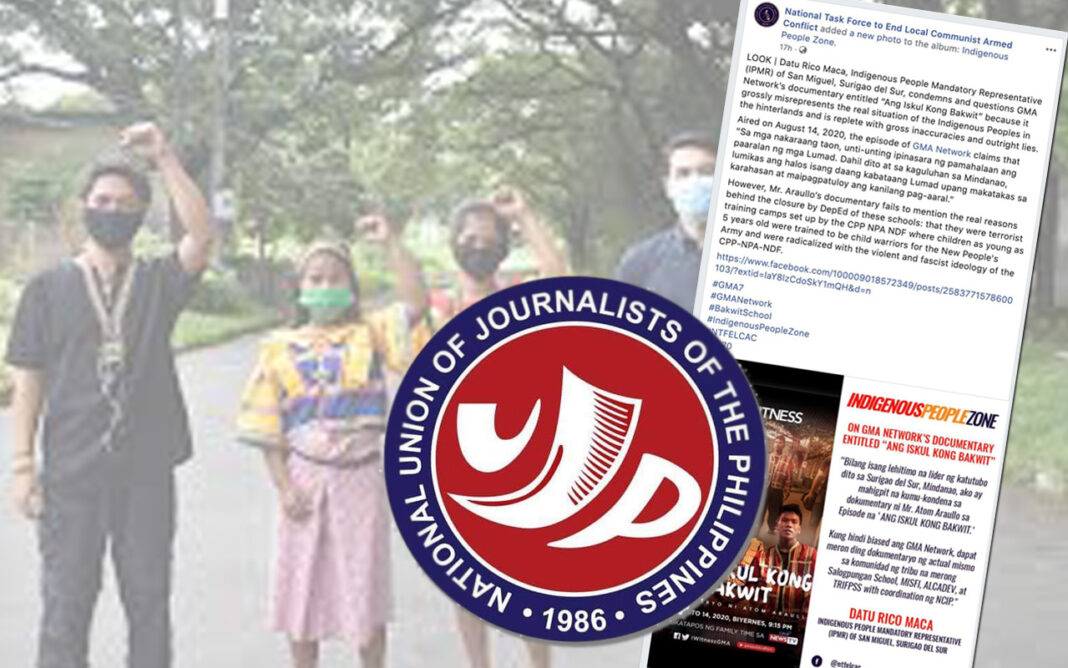 The National Union of Journalists of the Philippines calls out the National Task Force to End Local Communist Armed Conflict for its lame attempt to smear GMA’s I-Witness and reporter Atom Araullo for an episode that it did not agree with.

The NTF-ELCAC should stop attempting to control the narrative by vilifying those that present a contrary view.

“Ang Iskul Kong Bakwit” delves into the experience of lumad studying in makeshift schools in Metro Manila after fleeing their homes in the hinterlands of Mindanao.

In the guise of quoting Datu Rico Maca, Indigenous People Mandatory Representative of San Miguel, Surigao del Sur, it passes judgment on the documentary, calling it “replete with gross inaccuracies and outright lies.”

It also reiterates the claim, which government has used to forcibly shut down lumad schools, that these learning institutions, built by the tribes themselves where once formal education did not exist, and run by religious and.civil society groups, were “terrorist training camps” where children are supposedly taught to kill.

We will not dispute the NTF-ELCAC’s assertions as there is enough reportage and documentation by media and others about these.

But we do take exception that the NTF-ELCAC has chosen to insinuate that the documentary, by going against its point of view, is somehow supporting the “enemy.”

This is the same incredulous tactic it used to try and link the campaign to support ABS-CBN to the communist insurgency, the same misbegotten logic it uses to red-tag people and organizations, including us, with nothing but, to quote the agency’s own words, “gross inaccuracies and outright lies.”

It is ironic that an agency that professes to defend democracy seeks to stifle freedom of the press and freedom of expression, without which no society can claim to be democratic.