Home NEWS Netizens rail from too many issues in a day: Marcos holiday, white... 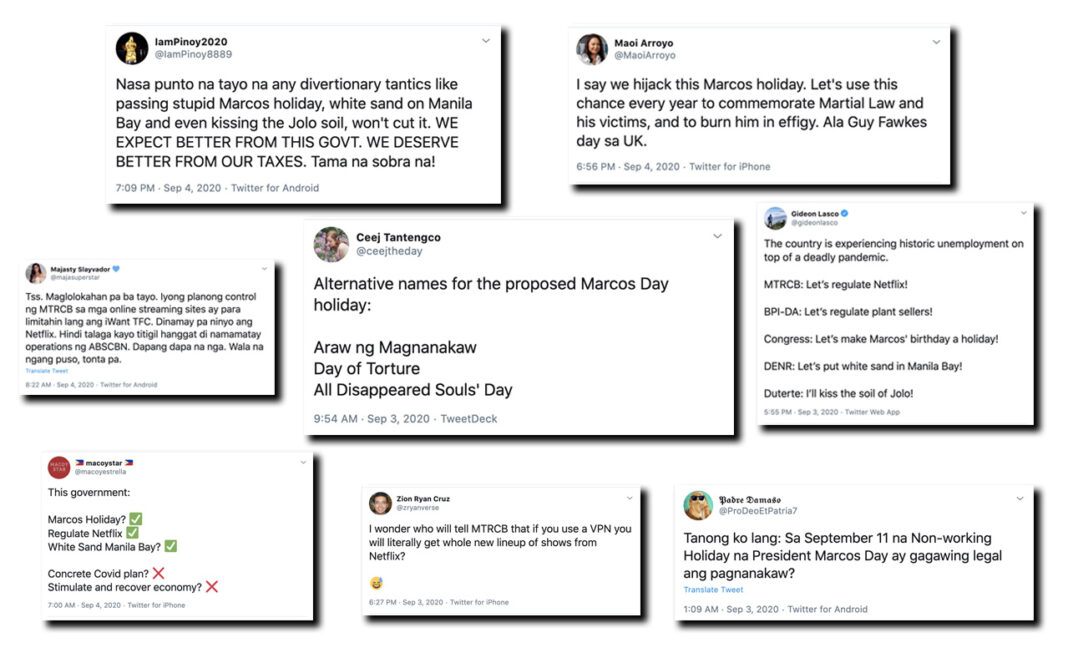 Congress passed a bill to declare the birth anniversary of the late dictator Ferdinand Marcos, Sr. a special non-working holiday in Ilocos Norte. The Department of Environment and Natural Resources (DENR) is dumping ‘white sand’ on Manila Bay for ‘beautification.’ The issue on the early of US Marine Lance Cpl. Joseph Scott Pemberton continues to rouse the public and various government branches and agencies. The Movie and Television Review and Classification Board (MTRCB) told senators they want to regulate Netflix and other video streaming services.

These are just too many big issues to handle for Filipinos in a day. Still, netizens and various sectors and groups could not keep mum especially as these issues would potentially have direct effects on the lives of ordinary Filipinos and even far-reaching or long-term implications. Many also scored the various government agencies for their ‘misplaced priorities’ during the pandemic.

Manila Bay white sand dumping Many disagreed with the move of the DENR to dump white sand on Manila Bay for ‘beautification’ for ‘sightseeing.’ Many also stressed that the move is ‘artificial’, not sustainable, and that this is not ‘rehabilitation’ that is supposed to be the agency’s project for the polluted bay. Environmentalists and groups also pointed out that crushed dolomite dumped on the Manila Bay’s shore will be washed away when a storm comes.

Also on September 3, news came out that the House of Representatives approved on third and final reading yesterday a bill declaring Sept. 11 of every year as a special non-working holiday in Ilocos Norte. Lawmakers voted 197-9 on September 2 to pass House Bill (HB) 7137, which seeks to commemorate the birthday of Marcos in his bailiwick and home province.

The Senate has yet to pass a counterpart measure to HB 7137. But Senate President Vicente ‘Tito’ Sotto III said on September 3 that a similar measure in the Senate will likely breeze through as he sees no objection to such measure. He explained that bills of local application are usually not intensively debated upon.

Meanwhile, Malacañang Palace said President Rodrigo Duterte will leave to Congress the fate of the bill.

[The President will respect the decision of Congress’ policy-makers.]

Lawyer and family of slain transgender woman Jennifer Laude challenged today the early release order from the court for Pemberton. Laude’s counsel pointed out there was no clear proof that he was well-behaved, adding the order did not comply with the provisions of the law, presenting only a ‘mere certification from US guards’ instead of the requirements from Bureau of Corrections (BuCor). Atty. Virgie Suarez asserted that if it can be proven the Pemberton showed good conduct while in detention, he still has to serve 10 months with the proper calculation of the law.

The Olongapo City Regional Trial Court’s Branch 74 on September 1 said Pemberton should be released early for ‘good behavior’, invoking Good Conduct Time Allowance. Pemberton has only served five years and eight months of his 10-year maximum jail sentence, after being convicted only of homicide on the charges of murder brought against him and his initia 12-year sentence reduced to 10.

The court credited to Pemberton a good conduct time allowance of 1,548 days or more than four years. This yields an accumulated jail time of 10 years, one month, and 10 days, the court said, and Pemberton’s counsel even asserted Pemberton had ‘overserved’ his term.

Senators sought clarification on Pemberton’s early release via GCTA. The Department of Justice (DOJ) stopped the BuCor from immediately implementing the court’s release order and wait for the motions to play out, while the DOJ said they would also file their own motion for reconsideration the following week. Presidential Spokesperson Harry Roque, who was previously Laude’s lawyers, said that the court’s decision is unjust.

In a hearing of the Senate trade committee on the proposed Internet Transactions Act on September 3, the MTRCB urged the Senate to craft a policy granting them the authority to regulate online streaming services, including Netflix.

MTRCB chair Rachel Arenas stressed the need to regulate streaming service platforms to ensure that all video platforms operating in the country are complying with Filipino contemporary values. The MTRCB officials made an example of the regulation of Netflix content in South Korea, which they say would not be as stringent in the Philippines if approved.

Lawmakers and government officials commented that this plan of the MTRCB is ‘very impractical’ and could be ‘logistically impossible’ with the limited manpower of the agency as Netflix has tens of thousands of content. Some also scored the proposal as ‘ridiculous.’

Some netizens argued this is beyond the MTRCB’s mandate.

Some scored how various government agencies have busied themselves with rather unpopular policies or programs, some which would directly adversely affect ordinary citizens, even amid the pandemic and continued increase in COVID-19 cases.