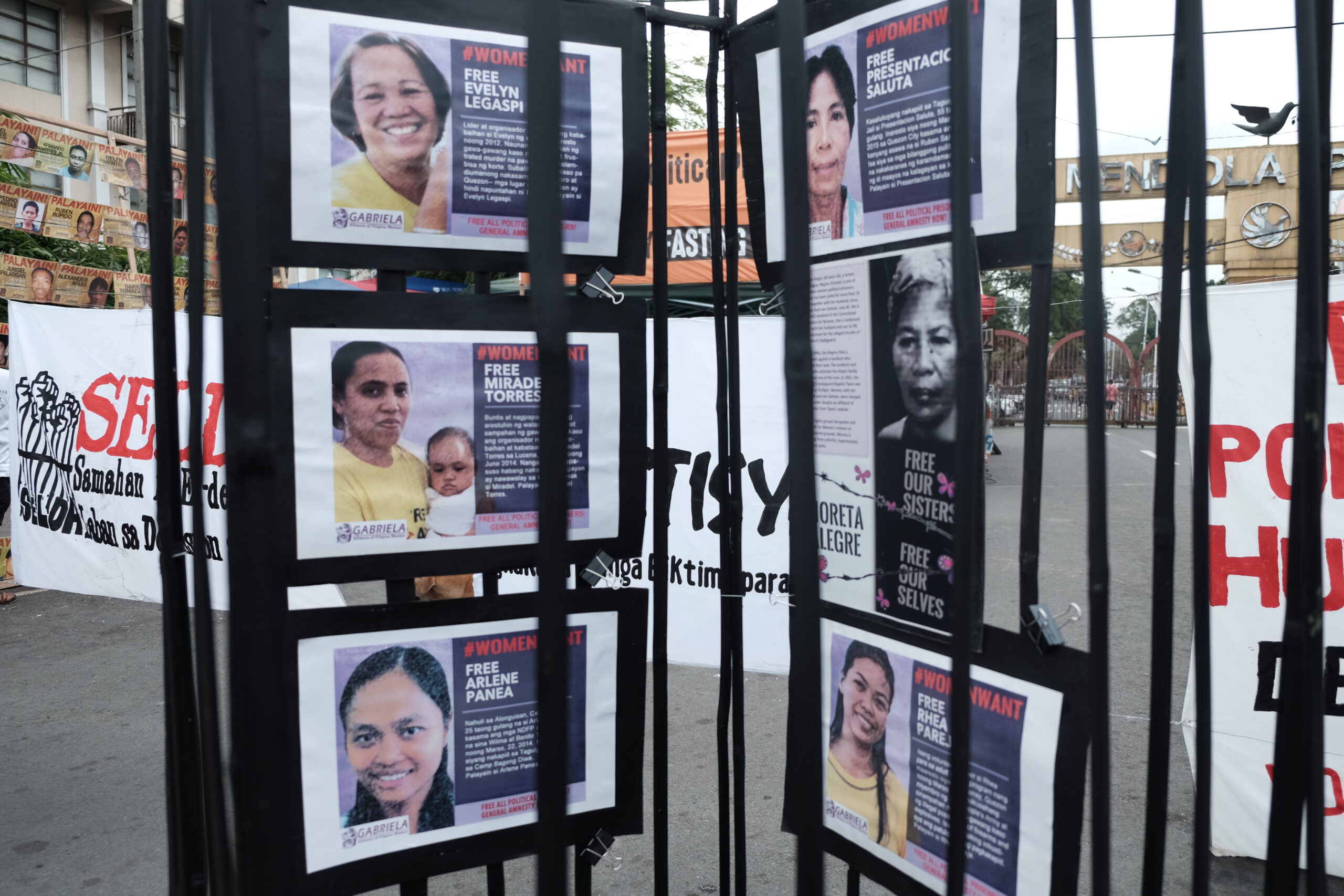 “There is only one reason for the non-release: the political prisoners, including the sick and elderly, have been held hostage to pressure the NDFP into agreeing to a haphazardly drawn-up peace agreement that would redound to the revolutionary movement’s capitulation instead of addressing the roots of the armed conflict,” said the National Democratic Front of the Philippines (NDFP) in its December 5 statement, amid frenzied statements from President Rodrigo Duterte and Presidential Peace Adviser Jesus Dureza on the release of political prisoners.

During the preliminary talks between the the incoming GRP peace panel and NDFP on June 14-15 in Oslo, Norway, the GRP panel committed to recommend the immediate release of NDFP consultants and Joint Agreement on the Safety and Immunity Guarantees (JASIG) protected persons and other political prisoners based on humanitarian grounds.

“There was also a clear understanding as early as May that the four remaining JASIG-protected persons held at the New Bilibid Prisons would soon be pardoned; that all the 400 plus political prisoners would walk free through general amnesty; and that the release of 130 sick and elderly political detainees would be prioritized for humanitarian reasons,” read a part of a statement by NDFP peace panel chair Fidel Agcaoili on December 5.

In the joint statements during the 1st and 2nd round of talks last August and October, the GRP reaffirmed its commitment to expedite the release of political prisoners based on the Comprehensive Agreement for the Respect for Human Rights and International Humanitarian Law (CARHRIHL) and the list of prisoners that the NDFP will provide.

But during the Christmas tree lighting ceremony in Malacañang on December 5, Duterte said that he is willing to release some 120 to 130 or more sickly and elderly political prisoners before Christmas time but only if a signed agreement on bilateral ceasefire between the GRP and NDFP would be produced.

“Now they’re asking for the release of 130 political prisoners. Sabi ko (I said), I cannot. I cannot give you that. I’m sorry but I have already conceded so much on the side of the government,” Duterte said in his speech.

“Produce to me a signed bilateral ceasefire agreement and I will release them within 48 hours. You can take my word for it,” Bello quoted the president in a statement.

In the Oslo Joint Statement signed on August 26, both parties agreed to craft a unified bilateral document within 60 days from the date of the joint statement. At present, no document has been produced yet. This is contingent with the parties presenting a draft of the bilateral ceasefire agreement as well as fulfilling promises and goodwill measures that spurred the peace talks. In the November 28 launch of the Mindanao Women’s Peace Table, GRP peace panel member Angela Librado-Trinidad said their panel is finalizing their draft of the bilateral ceasefire agreement.

Another death of political prisoner in 2016, ailing ones rushed to hospitals

“It is the NDFP that should be appalled at the utter bankruptcy of the GRP’s negotiating tactics which have already led to the death of Bernabe Ocasla, an elderly and ailing political prisoner whose long wait for justice ended tragically,” said the NDFP.

Ocasla who was detained in Manila City Jail died on November 28 after being on comatose for three days when he was rushed to the Jose Reyes Memorial Center after his blood pressure increased due to hypertension.

Seven months before NDFP consultants were released in time for the resumption of the peace talks, Eduardo Serrano, an NDFP consultant detained for 11 years, died in Taguig General Hospital from the Special Intensive Care Area in Camp Bagong Diwa due to cardiac arrest after suffering from a heart attack. Serrano was acquitted in two courts where his multiple murder cases are being heard. He was awaiting the result of his appeal in another court.

At December 4, 2016, at 8 am, another elderly and ailing political prisoner, Apolonio Barado, was admitted to the New Bilibid Prison (NBP) hospital in Muntinlupa City due to chest pains.

Barado, 62, is a peasant organizer in Bicol arrested in 2001 and has spent 15 years in jail. He suffers from coronary artery disease, hypertensive cardiovascular disease, and diabetes mellitus. According to Karapatan, he is supposed to be transferred to the Philippine Heart Center in Quezon City on December 5, because the NBP hospital does not have the basic cardiac and blood sugar monitoring equipment to keep up with his condition.

Earlier in November 11, 2016, Amelia “Amy” Pond, 64, was admitted to the Southern Philippines Medical Hospital for an operation on her lumbar spine. Pond also has chronic renal infection, osteoporosis L3-L4, and hyperlipidemia.

Pond is a volunteer teacher, researcher and curriculum developer for the Salugpongan Igkanugon Community Learning Center, the center of schools of Lumad communities that have been under attack since the past administration’s Oplan Bayanihan. Before her detention, she served as the coordinator for the Rural Missionaries of the Philippines in the Southern Mindanao Region (RMP-SMR) when she was arrested on August 19, 2016 and charged with trumped-up cases of murder and frustrated murder.

In a statement, Pond said, “Perhaps the Duterte government would recognize that I am elderly with poor health and that I am just a simple educator. What happened to me is a big disregard to the efforts to alleviate the conditions of one of the poorest, backward and oppressed sectors among the Filipinos, which are the Lumad.”

No political prisoners released since August

Also in its December 5 statement, the NDFP said that it expresses appreciation for the Duterte administration’s work to effect the release of its 19 consultants. However, the group noted that three months have passed since August but no other political prisoners have been released through the peace process.

Prior to the first round of talks in August, 19 NDFP consultants were released to participate in the peace talks. The first schedule of the first round was even postponed as the NDFP waited for the GRP to effect its promise of releases. The GRP was not to contest the motion for bail filed by the counsels for the political prisoners. Meanwhile, people’s lawyers’ group National Union of Peoples’ Lawyers and the Philippine Interest Law Center as well as hundreds of human rights workers did the necessary legal legwork within two week’s time to ensure the releases.