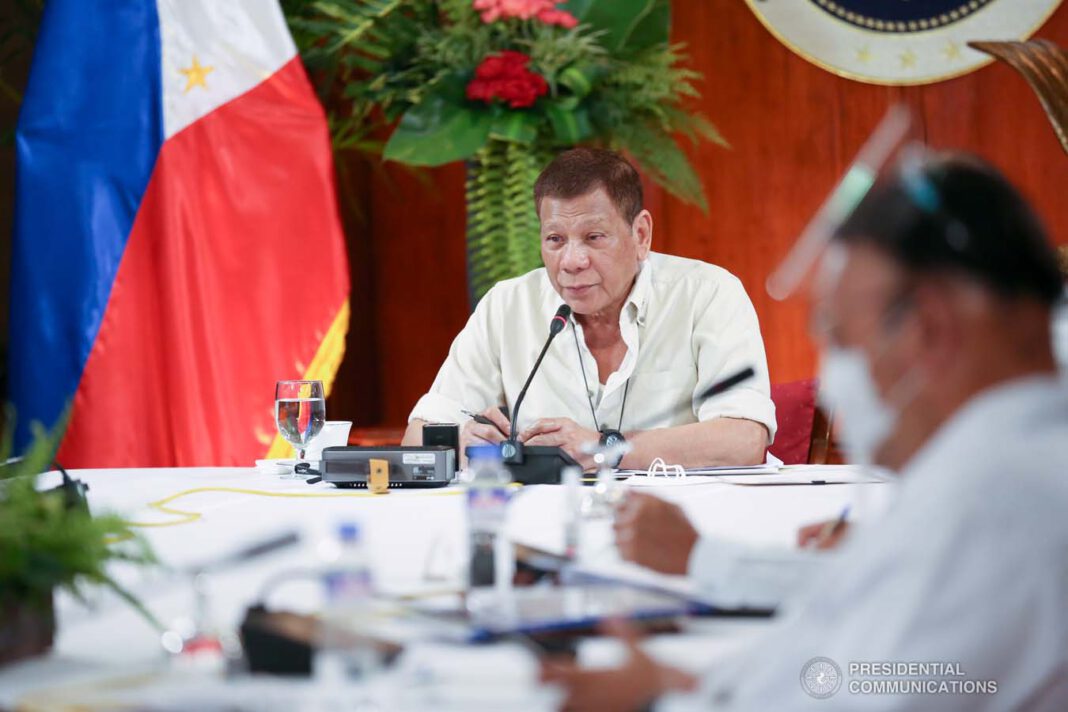 President Rodrigo Duterte’s cabinet officials in the president’s weekly address to the public on the government’s COVID-19 response on late evening of September 14, 2020 repeatedly thanked him for signing the Bayanihan to Recover as One Act as it gave their respective agencies additional funds, while the presidential briefings and other president’s activities continue to give publicity to Senator Bong Go.

Galvez said Bayanihan 2 also allocated P 4.5 billion to build medical isolation and quarantine facilities, field hospitals, dormitories for frontliners. This is for expanding the government hospitals’ capacity and in the whole country.

House Deputy Minority Leader and Bayan Muna partylist Rep. Carlos Isagani Zarate said when the Lower House passed the chamber’s version of the law in early August that they demanded the Executive to report on how it spent the almost P300 billion allocated for the implementation of Republic Act No. 11469 or the Bayanihan to Heal As One Act (BAHO).

Zarate noted that in June, the Department of Budget and Management (DBM)  released P3.78 trillion or  92.3 percent of the P4.1-trillion  national budget for 2020.

The Makabayan bloc, however, said that the funds allocated in Bayanihan 2 is too small for ‘recovery.’ There is P165.5 billion allocated for Bayanihan 2.

It would take a month before government passed the law to address ‘recovery’ in the pandemic.

By  September 16, the Duterte regime is fighting the “unseen” enemy for a half year. Amid pandemic, the reported status of economic crisis is comparable to the time of former dictator Ferdinand Marcos, Sr. COVID-19 cannot be seen but the chilling effect of being infected cannot cover up the hungry stomachs of the people.

The people demanded an “ease” to the lockdown imposed by IATF chaired by an “acquitted” accused of graft and corruption, none other than the country’s top health official, Department of Health Secretary Francisco Duque III. He did not explicitly thanked the president, but he should be thankful that the committee investigating Philhealth corruption recommended filing charges against all board members, except for him. Duque is chairman of Philhealth.

The report of the Senate Committee of the Whole on the alleged Philhealth corruption, amounting to P50 billion to hundreds of billions,  recommended the filing of charges against Duque and several other PhilHealth officers over supposed questionable release of funds of the agency’s emergency cash aid for hospitals.

Duque has been accused by 14 Senators of “failure of leadership, negligence, lack of foresight, inefficiency in the performance of his mandate, resulting in poor planning, delayed response, lack of transparency, and misguided policies in addressing the COVID-19 pandemic. On September 7, they repeated a call of resignation for his involvement of alleged massive corruption in the Philippine Health Insurance Corporation (PhilHealth).

While Duque can breathe a sigh of relief, the government’s woes despite additional funds are far from over.

Aside from the record-high unemployment, record-low economic growth, the still in the thousands cases per day—the more than 3,000 to almost 5,000 in the last week—the problems, their resulting problems and the costs entailed continue to mount. This is not even talking about the vaccine that is not even around yet. Department of Education Secretary Leonor Briones was not in the briefing, despite the real dark cloud over what would happen in the opening of classes on October 5.

Department of National Defense Secretary and NTF COVID-19 chair Delfin Lorenzana said 200,431 OFWs have been repatriated and 80,000 more are expected to come home. The cause and problem is the spread of COVID-19 and closure of their companies (temporary or permanent) in the countries they work, now the government has assisted their repatriation. However, they are mostly, if not all, without work—work that they did not find in the country to begin with that is why they left to work abroad to begin with. They would not receive aid, especially now that the government promised to no longer give aid—one that it took them six months to complete distribution. These repatriated OFWs would add to the number of unemployed, and among those, despite 6 months of quarantine, the government only provided for a monthly aid of P5,000 to P8,000 for 2 months only (for April and May).

Lorenzana may not have given thanks to Duterte, but his office would also receive P 4.5 billion for the isolation and treatment of returning OFWs.

Duterte said he relied on China and Russia to give us the vaccine without the required downpayment, that he said is being asked by other companies and he said is really like funds used for the development of the vaccine. He said he is expecting trials on December—but hey wait, he said before the vaccine will be there by end of year, a “COVID-free December”? He might start adjusting his statements now that September’s half-done and no vaccine isa said to be completed yet. Some new studies said the mass production of vaccine would take four years—might mean the time this gets to countries who did not produce them. Maybe with Duterte’s courting China and Russia’s favor, the Philippines could get the vaccine sometime midway that projection, maybe in two years?

What is Senator Christopher ‘Bong’ Go doing in every presidential briefing anyway, seated at the right side of Duterte? He would always give the excuse that he promised to never leave the president.

Why is a member of a co-equal branch of government, the legislature, doing in the briefings of the executive branch? Why is he always beside Duterte, is he still able to fulfill his duties as a senator?

Why does he get special mentions and special tasks from Duterte, and acknowledgments or special mentions from appointed cabinet officials as if they get approvals or appointments from him? Just like in the last briefing, the newly-appointed PhilHealth chief mentioned Go’s endorsement of him as if that’s crucial? In what structure, possibly something not official and publicly known.

In this briefing, the COVID-19 chief implementer said he approached Bong Go to push Senate for the modernization of the DOH. Sure, why not, does he have to be there in the briefing in front of Galvez to ask Bong Go of that? Go got his special mention again with this one.

He got two special mentions from Duterte, the last mentioning him before announcing the task force findings to press charges against top Philhealth officials except Duque. There was really no point mentioning Go here, just more babbling and publicity.

“Sabi ko nga kay Bong na, “If I were you, you act as an opposition.” You should do better than the opposition para mawala ‘yung ano na you are trying to because of our relationship that you were my aide before that you tend to protect, ganun. Sabi ko, “Why don’t you be an opposition and try to look into all matters of corruption?” Iyon man ang battle cry natin and that is what we intend to do during my last two years,” said Duterte.

Bong Go also announced the signing of the Bayanihan 2, he had the first photos to distribute to media for it and of course, he was one of two officials who accompanied Duterte in the photo. His photo was also the one shown in th government briefing following the Senate. Is he the Senate representative to witness the signing of this law?

Also, what is his photo doing in the opening credits/bill board of the Laging Handa briefings—the only official featured in that part of the video, its first few seconds. Not even Duterte or PCOO officials were featured, but Bong Go, why Bong Go of all people?

This is too much of a hard sell for discreet but-not-so discreet early campaigning for the 2022 elections.

Six months on and on

After six months of lockdown, the Filipinos have survived roughly. Though, thousands had been laid to rest because of the COVID-19 pandemic, and Galvez said some other top 10 cause or non-COVID-19 deaths (or might be among those not tested). Many have also died of extrajudicial killings because of tyranny. The economic crisis will continue to choke the financial capability of the government to response to the immediate needs of the people. These are the real stories.

Duterte continues to survive as well. Through regaling people with stories and promises, soon bound to change, as he does not really have control over the spread of COVID-19 in the country, or the development of vaccine by other countries while he manage the pandemic here and wait it out.