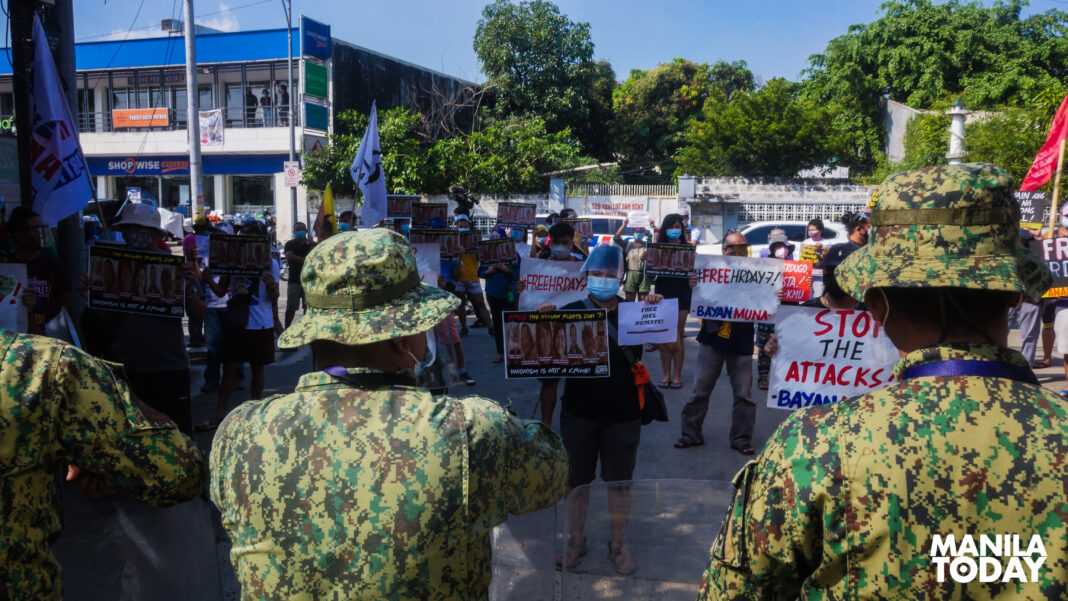 Palatino added that state forces arrested the #HRDay7 because of their resolve to fight for the basic rights and legitimate demands of Filipinos.

In a statement on Friday, Dec. 11, Council of Global Unions (CGU) said the arrested activists, known as the #HRDay7, “may be facing obviously manufactured charges of illegal possession of firearms and explosives on this account – the same criminal charges filed against trade union activists who were arrested before them.”

“This is yet another blow to the trade union movement in the Philippines. Trade union activists are being criminalized, illegally arrested and detained, as the government’s way of preventing them from organizing workers into unions and associations, and depriving them their freedom of thought and expression as translated into their activities among the workers,” the group said. “The intensified crackdown is precisely aimed at stifling dissent and organized action among the people.  Killings among activists and rights defenders, as a way of instilling fear and silencing the people, have not ceased,” it added.

For his part, Anakbayan Metro Manila Chair Mark Fernando said the crackdown on activists and journalists is being waged to prevent any opposition to and resistance against the administration’s policies that go against the interests and welfare of the Filipino people and the country’s sovereignty.

Under the ratified budget, the Office of the President will get P4.5 billion for its confidential and intelligence funds.

The CGU also called on the United Nations Human Rights Council and the International Labor Organization  to consider as an emergency “the deteriorating human rights condition in the Philippines.” The international bodies should also send “their missions to investigate human rights and trade union repression in the country and help reverse the situation,” it added.

It was Quezon City Regional Trial Court (RTC) Executive Judge Cecilyn Burgos-Villavert who issued the search warrants that authorized the members of PNP and CIDG to raid the houses of the #HRDay7.

In a statement over the weekend, Public Interest Law Center – Philippines said the state forces adopted the usual tactic of “fabricating evidence to apply for search warrants with the same judge who had issued search warrants against many political detainees, and by planting firearms, ammunition and explosives during the raid of their homes.”

Villavert has been widely criticized by various groups for issuing and abusing warrants to allow state forces to conduct searches on the offices of progressive groups and the homes of activists.

Supreme Court Circular A.M No. 03-8-02-SC enables the executive judges of the Manila and QC RTCs to issue search warrants that can be served outside their jurisdictions.

The applications “shall be personally endorsed by the heads” of PNP and the National Bureau of Investigation, the circular stated.

To recall, then National Capital Region Police Office (NCRPO) Acting Director Brig. Gen. Debold Sinas held a ‘dialogue’ with Villavert hours before the raid in Bacolod in 2019, which saw the arrests of 56 activists.

The search warrant issued by the same judge also yielded the arrests of Gabriela member Cora Agovida and his husband Michael Tan Bartolome in the same year..

Prior to his appointment as Metro Manila police chief, Sinas became the regional director of the Central Visayas police office from 2018 to 2019.

Human Rights Watch earlier said Sinas has a contentious track record, which includes the spate of “unsolved killings” in Central Visayas in 2019 that numbered to 320. The group also cited his responsibility in the massacre of 9 sugarcane workers in Sagay City, Negros Occidental in 2018, which remains unsolved.

The Commission on Human Rights earlier noted that killings in Negros under Sinas’ watch became more frequent and “none of the investigations had produced results.”

According to human rights group Karapatan, at least 188 human rights defenders have been killed under the Duterte administration, while 426 activists and community organizers have already been arrested.

In mid-November, Sinas officially took over the PNP’s top post.

In the same month, members of the Makabayan bloc in the House of Representatives were also red-tagged by no less than President Rodrigo Duterte and officials of the National Task Force to End Local Communist Armed Conflict (NTF-ELCAC).

The P4.5-trillion national budget for 2021 was ratified by the two chambers of Philippine Congress a day before the arrests of #HR7. The ratified budget set aside at least P19 billion for the so-called Barangay Development Program of the NTF-ELCAC.