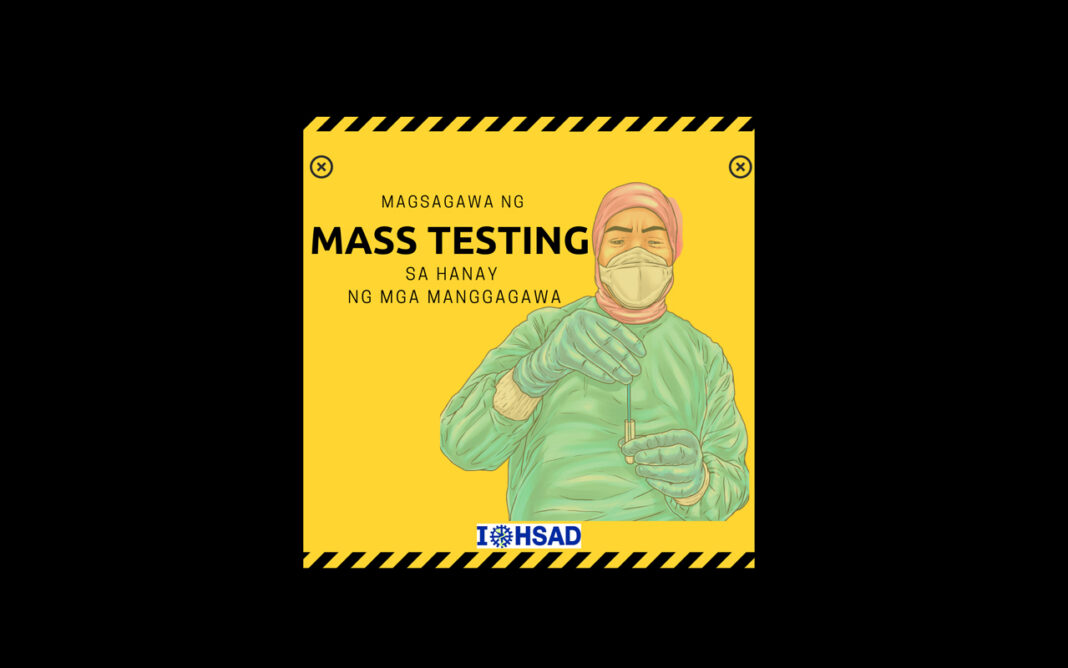 As the country transitioned from ECQ to MECQ (in Metro Manila and few other areas) and GCQ, members of different labor groups held a media briefing via Zoom. The activity was led by CURE COVID, a group monitoring the healthcare needs of Filipinos affected by COVID-19.  The participants discussed challenges workers are now facing because of the pandemic.

Debbie Faigmani, leader of the Drug, Food and Allied Workers Federation (DFA-KMU) reported how they have received reports of various employers reportedly forcing workers to sign health waivers before allowing workers to return to work.

He also said that there are no social distancing measures in Nexperia, an electronic firm located in Cabuyao, Laguna. Nexperia has reportedly sent home nine of its employees who showed symptoms of COVID-19, but it did not provide them with medical assistance and instead told them to just do self-quarantine.

Faigmani also said, “Without mass testing and other necessary steps to identify, isolate, and treat workers symptomatic of the disease increases the possibility of a new surge of COVID cases.”

Labor groups also urged the Duterte government to ensure that the Department of Labor and Employment (DOLE) and its adjunct agencies’ orders and advisories should be consistent with respect for workers’ rights. All regulations, the groups insisted, should increase workers’ and workplaces’ capability in deterring or fighting the pandemic.

Not yet a week into the ECQ, reports of irregularities have already begun to mount.

In a report by Workers Assistance Center (WAC Philippines), the Daeduck Philippines, Inc. (DDPI), a company located inside the Cavite Economic Zone, has served notices of termination thru email to 154 regular employees. Workers interviewed by the WAC said they will be jobless effective June 20, 2020.

Also in the midst of the lockdown, DDPI dismissed 194 of its contractual workers last April 14.  The length of services of the 194 contractual workers range s from six months to 11 years. The WAC is a labor and human rights advocacy group based in Cavite

Another provision prone to abuse by employers is the Labor Advisory No. 17 signed by DOLE Sec. Silvestre Bello last May 16, 2020. Section 5 of the said advisory allows employers to lower their salaries and benefits as a means to supposedly help companies cope with the business downturn.

The labor center also said that 68,000 Cavite ecozone workers without mass testing are put into the firing line of COVID-19.

Nadia De Leon, executive director for the Institute for Occupational Health and Safety Development (IOHSAD) said, “Wage cuts are comparable to a disease attacking workers’ health. Wage cuts decrease the purchasing power of workers to buy nutritious food, vitamins – all things they need to strengthen their immune systems,” she said.

In connection to the said advisory, a company located in Canlubang, was reported to have removed the premium pay of workers right after the issuance of Labor Advisory No. 17 by the DOLE.

De Leon said that declaring COVID-19 as an occupational disease will push companies to strengthen occupational health and safety standards and to prioritize health of its workers more rather than profit. This proposal is made more relevant with the ECQ’s failure to flatten the curve and the DOLE’s OHS report in August 2019 which showed that almost half of 49,000 establishments inspected by DOLE do not comply with Occupational Health and Safety standards and laws.

De Leon further stressed, “Workers are campaigning for the recognition of COVID-19 as an occupational disease so they can receive compensation if they are infected at the workplace. It also frees them of the burden of having to prove that it is a work-related disease.”

Also equally important is the state of public transport to provide the necessary service to workers going to and from their workplaces.

At a time when more PUVs are needed to implement effective social distancing during travel, transport workers fear losing their jobs. Social distancing will greatly affect the number of passengers they can take on. Even now, bus companies are already deciding to lower the salaries of their drivers and conductors. When they return, it is certain that drivers will be earning much, much less compared to what they were earning before the pandemic.

A bigger wave or surge in the number of COVID-19 cases in the country is inevitable if strict compliance with occupational health and safety standards in the workplace is not observed. To effectively fight the pandemic, recognizing COVID-19 as an occupational disease is crucial.

Sandy Hachasco of the Malayang Alyansa ng Bus Employees at Laborers (MANIBELA) said that it was an irony that while more public utility vehicles are needed so that more passengers can be accommodated even as they observe social distancing, the government is   determined to push through with its infamous jeepney modernization plan. This will affect the livelihood of thousands of PUJ drivers, as the modernization plan forcibly retires thousands of jeepneys.

Hachasco also stressed the need for government to provide economic aid to transport workers affected by the physical distancing.

The labor groups also insisted that the economic downturn is not the fault of employers or employees.

For a COVID-safe workplace, the IOHSAD stressed on the following: the need for mass testing and comprehensive monitoring of the workers’ health in the workplace; the routine inspections conducted by DOLE in connection to the implementation of labor laws and OHS compliance of companies; and for the workers themselves to form a functioning occupation health and safety committees in their workplace.