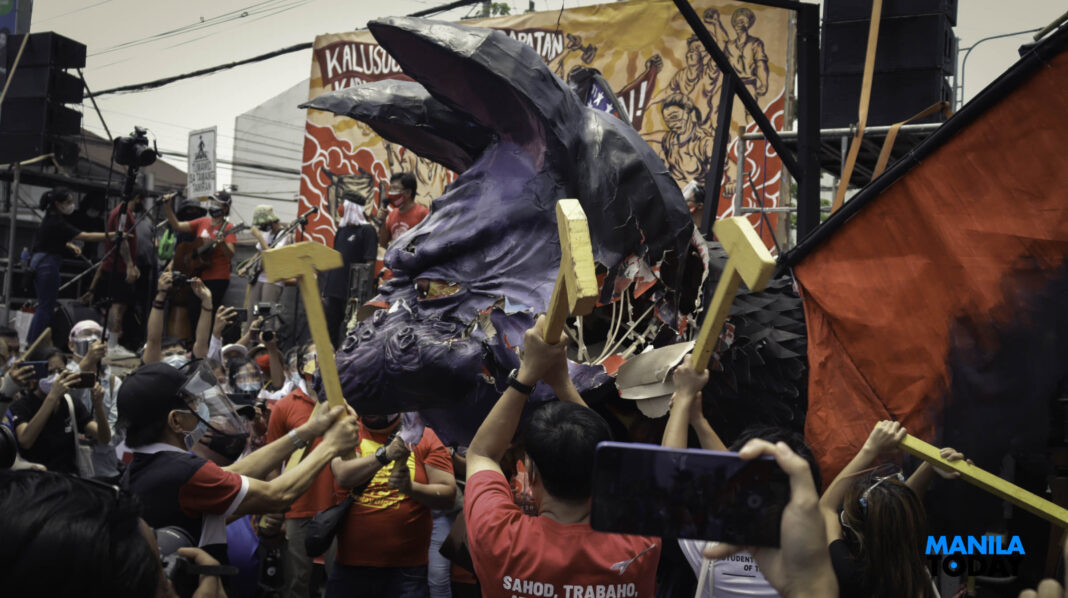 In time for the commemoration of Mayo Uno Labor day protest, various union leaders took the busy streets of Welcome Rotunda along with the masses to struggle and demand for livable wages, financial aid, and express their grievances to the prevailing ‘criminal’ state negligence of the Duterte regime during the global pandemic.

Kilusang Mayo Uno (KMU) chairperson Ka Bong Labong condemned the US-China-Duterte regime and its various affronts on the labor groups’ demands. Ka Bong also underlined the significance of community pantries to the marginalized sectors at the height of a pandemic, as well as President Rodrigo Duterte’s irresponsible actions which made arise of these community pantry initiatives across different regions hence calling for adequate financial aid.

P10,000 cash aid was the very much-needed call of labor groups beneficial to the marginalized and underserved communities including those who have lost decent jobs ahead of the continuing lockdown in the country.

However, the groups denounced the P1,000 financial aid by the government.

As a matter of fact, IBON executive director Sonny Africa affirmed that while acknowledging the help of the government to families affected by the socio-economic crisis brought by the pandemic, the said P1,000 aid is not even sustainable for an average Filipino family’s weekly expenses.

Six out of 10 Filipino families suffered from hunger due to COVID-19 pandemic alongside the continuous state-enforced lockdowns, a survey from the Department of Science and Technology – Food and Nutrition Institute revealed.

Accordingly, a five-member family has to have at least P2,000 a week to attend to their basic needs such as decent food and other humanitarian consumptions.

On April 25, it must be noted that the Senate had instead call to probe thoroughly the utilization of P19.2 billion budget of the anti-communist agency rather than pushing to defund amid the provocative and usual red-tagging remarks of its officials. Meanwhile, Senator Ping Lacson affirmed that NTF-ELCAC may be defunded in 2022 if the Department of National Defense (DND) ignore the Senate’s recommendation to remove Lt. Gen. Antonio Parlade Jr. as the agency’s spokesperson.

KMU further assailed the Duterte’s administration priorities and interests which are all centered on the crackdown against human rights.

Among the recent victims of slain unionists include Dandy Miguel and Manny Asuncion in Calabarzon this March 2021. KMU accounted 51 death toll among workers and labor leaders under Duterte’s leadership marred with illegal arrests, harassment, intimidation and intervention on union activities.