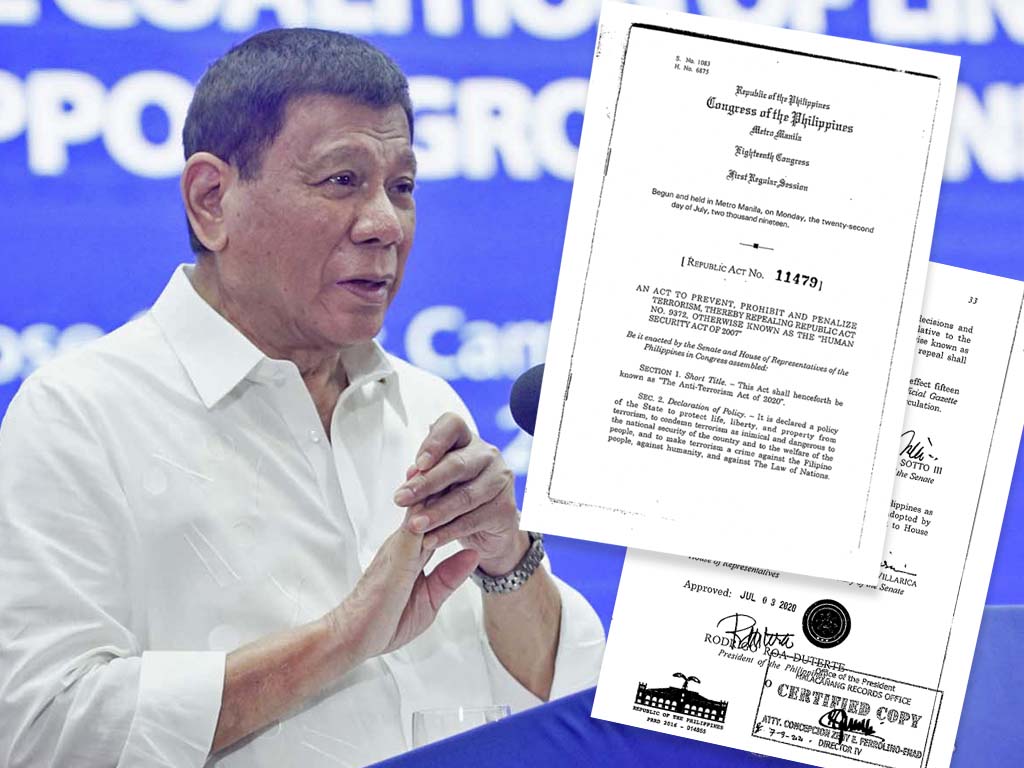 Various groups aired their continuing protest and call for the repeal of Republic Act 11479 or the Anti-Terrorism Law Act (ATL) that was signed into law by President Rodrigo Duterte on July 3, 2020.

The implementing rules and regulations (IRR) of the law drafted by the Department of Justice was approved by the Anti-Terrorism Council (ATC) on October 14 last year.

Critics of the law have been inclined to refer to it as the “terror law.”

Bagong Alyansang Makabayan Secretary General Renato Reyes said the law has been an instrument to terrorize the public and reinforce Duterte’s own reign of terror.

“The Terror Law has been used to intimidate the media, lawyers, activists, and critics through de facto designation every time the AFP and PNP use terms such as “communist terrorist groups” when referring to critics of the regime,” said Reyes.

Reyes said they have been proven correct in opposing the law.

“The United Nations defined ‘terrorism’ as ‘criminal acts intended or calculated to provoke a state of terror in the public, a group of persons or particular persons,’ when it is exactly the aim of the Duterte tyranny, to ‘terrorize’ the people,” said Anakpawis Party-list National President Ariel Casilao in a statement on July 4.

He highlighted the extrajudicial killing of its National Chairperson Randall “Ka Randy” Echanis in August 2020 during curfew hours and lockdown and no suspect or perpetrator has been brought to justice up to this day.

Casilao also stressed that the March 30 arrest (again during strict lockdown) of Anakpawis Party-list National Vice-President Joseph Canlas on trumped-up charges led to his getting infected with COVID-19 and his death on May 11.

This was also being done to discourage the people from rising up and joining activist groups, to repress legal and democratic dissent and silence critics, a build-up for an authoritarian rule, he said.

“Even the noble community pantry movement was red-tagged by this paranoid fascist regime as it felt threatened by the broad mobilization of the people,” said Casilao.

The National Task Force to End Local Communist Armed Conflict (NTF-ELCAC) went so far as digging up community pantry initiator Ana Patricia Non’s activist roots in college and raised fist photos to lend proof to their red-tagging of her and the community pantry as a whole. The NTF-ELCAC is created by Duterte’s Executive Order 70 and has been much-criticized for wanton red-tagging.

Red-tagging has become a threat and justification to be arrested, killed, or imprisoned, as many recent cases have shown. But with the ATL, red-tagging turns into terrorist designation and it comes with the full force of the law.

The ATC is a body created by the law and composed of presidential appointees and cabinet members and was given the much-protested power to designate individuals and groups as terrorists. Prior to this law, a Philippine court has to proscribe an individual as a terrorist to be tagged and prosecuted as one.

“The Terror Law has been used to designate as “terrorists” activists, revolutionaries, and peace consultants without due process and without any evidence nor clear parameters,” said Reyes.

The ATC has designated several organizations and individuals as terrorists in several resolutions since the IRR was finalized. The Anti-Money Laundering Council, following suit, has also frozen assets of various individuals and groups.

[The ATL’s anniversary is a day of mourning because this law symbolizes the regime’s assassination of our civil liberties and human rights, along with the right to organize and the very important academic freedom.]

The group said the act of mourning is also in the literal sense because of the many activists and ordinary citizens killed by state forces in the guise of counterinsurgency operations.

A total of 37 petitions, either asking for full revocation or challenging certain provisions of the law, were filed in 2020 by progressive groups, lawyers, church groups, journalists, youth and students, and ordinary citizens among others.

The Supreme Court (SC) oral arguments on the petitions challenging the law only started on February 2, 2021. Nine days of oral arguments wrapped up on May 17. No temporary restraining order was issued by the SC as most if not all petitions demanded such relief, leaving the law in effect.

“The Terror Law can also be used during the elections if it is not stopped. It can be used against the broad Opposition to Duterte’s desperate attempt to remain in Malacañang beyond 2022,” warned Reyes.