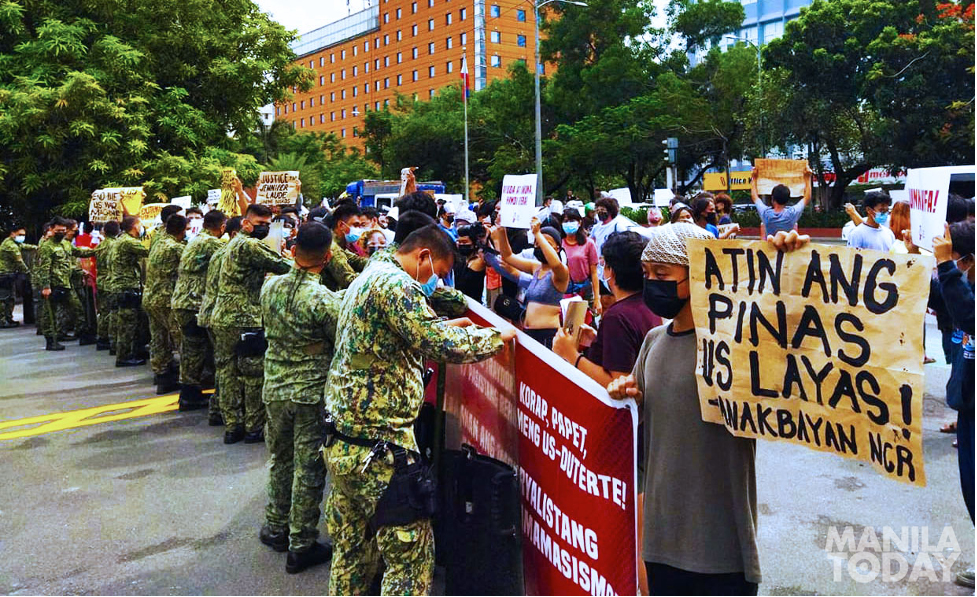 In time for the 75th year anniversary of Philippine-American Day on July 4, progressive youth groups led by the League of Filipino Students (LFS) held a lightning rally at the arc of the US Embassy in Kalaw Avenue in Manila.

Youth groups condemned the US continued century-old intervention in the country’s sovereignty. They also decried President Rodrigo Duterte’s administration’s failure to assert independence by continuing US-RP military treaties and other foreign policies that they say are lopsided in favor of the foreign superpower.

The groups stressed the need for economic aid and concrete plans to resolve the worsening crisis of COVID-19 rather than prioritizing funding war armaments.

[We are here at the US Embassy to demand accountability for the billions and trillions the US loaned to the Duterte regime only to be directed to war armaments, bombs, and the killing of our fellow Filipinos.]

On June 21, the Armed Forces of the Philippines (AFP) received P183 million ($3.8 million) worth of weapons and equipment from the US army.

The groups assailed how the joint military trainings under the bilateral Visiting Forces Agreement (VFA) were held only in the Philippines and only ended up giving US troops unfettered access to the country and their ships and transports and contents brought in the country unchecked.

The VFA was signed under former President Joseph Estrada in 1999, only a few years after the repudiation of US bases in the country, the last of their military physical basing and vestige of their direct colonization of the Philippines. Estrada was one of the 12 senators who voted to abrogate the US bases treaty.

Duterte decided to scrap the VFA following the US visa cancellation of close ally Sen. Ronald “Bato” Dela Rosa, over his chief role in Duterte’s bloody war on drugs. The Philippines sent US notice to terminate the VFA in February 2020 and it would have expired in August 2021. But Duterte extended its suspension again up to February 2022, just a few days after the 123rd Philippine Independence Day.

Despite the VFA in limbo, Balikatan exercises between the US troops and the AFP resumed in April this year, after having been suspended last year due to the COVID-19 pandemic.

In February this year, Duterte demanded that the US quadruple its military aid to the Philippines following talks to renew the VFA. Observers thought this to be “extortion” or Duterte leveraging his friendly ties with China and US insecurity over China’s incursions in the region.

But a similar negotiating tact was observed earlier when the late Pres. Corazon Aquino tried to start talks over a new US bases treaty in 1989, demanding $1B from the US.

The Enhanced Defense Cooperation Agreement signed under the late President Benigno Aquino allowed not only seasonal or annual training, but also the basing of US troops all over the country, even after the Filipino people through the Senate rejected the extension of military bases in 1991.

Groups that protested on Philippine-American Friendship Day demanded the immediate abrogation of VFA.

Transgender woman Jennifer Laude was brutally killed by Pemberton in 2014. The US soldier was in Subic as part of the VFA.

In 2015, the murder charge against Pemberton was downgraded to homicide, for which he was convicted in the same year. He used a “trans panic defense” or “having acted violently for unwanted same-sex advances.” The judge cited as mitigating circumstances in Pemberton’s case that Laude did not reveal her gender identity. He was sentenced to 6 to 12 years in jail.

[This is supposedly US-RP Friendship Day, but does the Philippines and US have a friendship? Our relationship with the US is one of slavery.]

In 2005, four Marines were tried in the Philippines for raping “Nicole” in what became known as the Subic rape case. Three were acquitted and one was convicted at trial but was later acquitted after Nicole recanted her testimony and emigrated to the US.

In both cases, the US retained jurisdiction over their troops at trial for committing crimes in the country, as this is a provision of the VFA.

The protest ended with the burning flag of US as a sign of the Filipino youth’s indignation at continuing US government intervention in the Philippines.