Home FEATURES Gains of the peace talks in 6 months 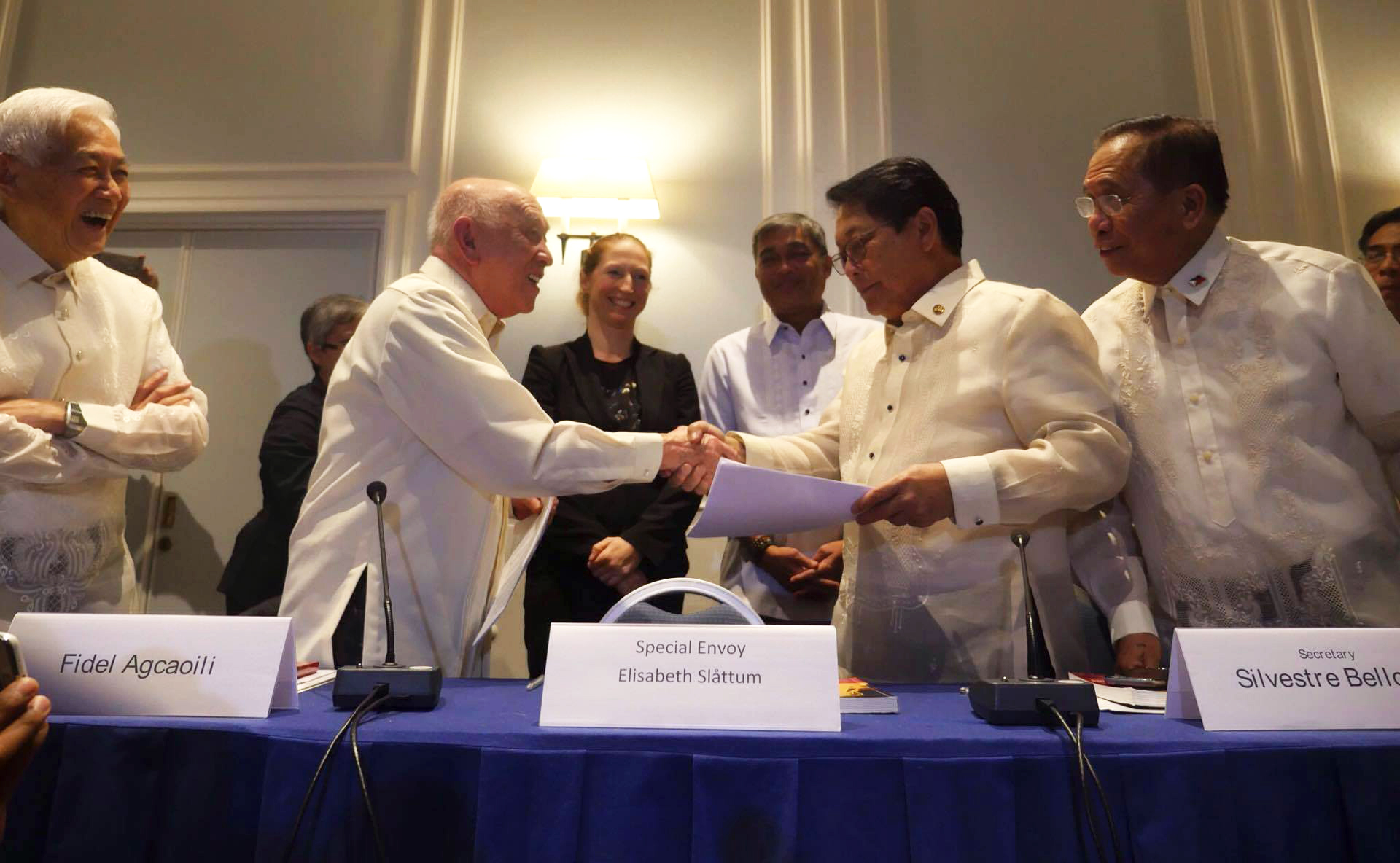 We list the work and the achievements of the Government of the Philippines’ (GRP) panel under President Rodrigo Duterte and the National Democratic Front of the Philippines (NDFP) Peace Panel from the resumption of formal talks in August 2016 up to January 2017.

These efforts and achievements should redound to direct and actual benefits to the Filipino people in the quest for just and lasting peace.

1. Reaffirmation of signed bilateral agreements especially The Hague Joint Declaration of 1992, the Joint Agreement on Safety and Immunity Guarantees of 1995 and the Comprehensive Agreement on Respect for Human Rights and International Humanitarian Law (CARHRIHL) of 1998

As early as the preliminary talks in Oslo in June, the two parties have agreed to reaffirm all previously signed agreements—while those are all already binding—in a bid to commit to pursue the peace process. This commitment was made formal in a signed Joint Statement after the first round of peace talks in August.

The Hague Joint Declaration of 1992 set the framework for the talks— objective, common goal, mutually accepted principles —but was undermined during the Benigno Aquino administration whose panel called it “a document of perpetual division” and soon after the talks collapsed.

This time, the GRP and NDFP agreed to reconstitute the JASIG list of the NDFP that was destroyed when the NDFP office in Utrecht, Netherlands was raided in 2007 by Dutch authorities, in efforts of the Dutch, US and Philippine governments to keep Jose Maria Sison in the European Union (EU) terror listing as revealed by Wikileaks cables. (Read Bulatlat.com’s related article here.) The current GRP administration helped released 17 NDFP consultants who were able to participate in the peace talks, while three more remained in jail.

While the CARHRIHL was the first agenda where both parties reached an agreement, the implementation of this is the tricky part—where if complied with should bring an environment with considerably less human rights violations and no political prisoners. The Gloria Arroyo administration saw the rise of extrajudicial killings, whose counterinsurgency plan Oplan Bantay Laya 1 and 2 treated activists and ordinary citizens as combatants. The Oplan Bayanihan of Benigno Aquino saw the rise of political prisoners in the country, 294 in Aquino’s 6 years, redolent of Martial Law and Marcosian tactics. In the new administration, commitments in adherence to the CARHRIHL were made, such as the promise to release political prisoners.

2. Agreement to fast-track the peace process

As you may know by now, the peace process has a four-item substantive agenda that are to be discussed and agreed upon in succession until the final truce. The first agenda that came to an agreement, CARHRIHL, was said to have taken a few years and more than 80 drafts until it was signed in 1998. And after various episodes of peace talks cancellations during the Arroyo and Benigno Aquino administrations, it has taken 18 years before the second agenda is now discussed on the table. The NDFP agreed in the the first round of talks to the GRP proposal to accelerate the negotiations in the way that while the second agenda on social and economic reforms is being discussed, the next two substantive agenda would be worked on simultaneously.

3. Agreed on common outline for the agreement for the third and fourth agenda

In the second round of talks, the two parties agreed on the common outline and exchanged full drafts for the Comprehensive Agreement on Political and Constitutional Reforms, way ahead of schedule. The common agreed outlines have the core topics federalism, electoral reforms, judicial reforms, military, trade and economic agreements, political authorities and mechanisms, transitional justice, etc. The two parties also agreed on the common outline for the Comprehensive Agreement on End of Hostilities and Disposition of Forces.

Also in the second round of talks, the JMC (composed of the GRP and NDFP monitoring committees) agreed to develop a human rights monitoring system and promote human rights through fora and trainings. The JMC also agreed to recommend the inclusion of the study of human rights and international humanitarian law (IHL) in the curriculum of schools.

5. The signing of the Supplemental Guidelines for the JMC under the CARHRIHL.

However technical this may sound, this is an important success since the finalization of this document was pending since 2004. It was finalized and signed in the third round of talks in Rome. The document provides for the full operationalization of the JMC. Whereas before, the JMC mechanism would only receive complaints of human rights, IHL and ceasefire violations, the two parties can now agree to hold joint investigations of mutually-filed complaints, on accusations hurled against each other as we are now witnessing, and then agree to serve punishment for the violations and to indemnify the victims.

6. Developments in the discussions for the Comprehensive Agreement on Social and Economic Reforms (CASER)

This is said to be the heart of the peace talks, what is at the very core of what would address the roots of armed conflict. In the second and third round, there were quick developments in the discussion on the CASER that the NDFP had projected it can be signed within the year.

The two parties were able to agree on three parts of the CASER, open discussion on the fourth part (Land Reform and Rural Development) and scheduled to discuss two more parts (national industrialization and economic development; and, environmental protection, rehabilitation and compensation) in the scheduled fourth round of talks in April. The two parties signed ground rules for the discussion on the CASER. The two parties reached a common understanding on the general features of the agrarian reform problem in the Philippines.

The two parties agreed in principle to the free distribution of land to farmers and farm workers as part of the governing frameworks of the CASER.

7. NDFP expressed openness to Duterte’s goal of shift to federal system of government provided certain safeguards like the prohibition of puppetry, dictatorship, graft and corruption, dynasty building and warlordism.