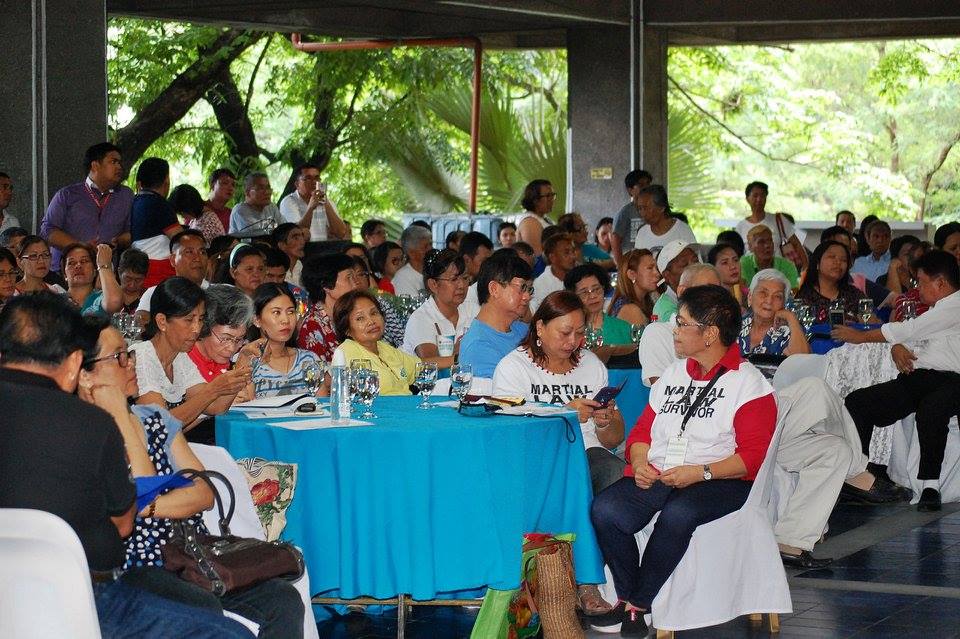 On May 8, the Human Rights Victims’ Claims Board (HRVCB) announced the release of partial reparation money for 317 (only 311 in the list) Martial Law human rights victims.

In a ceremony in University of the Philippines Diliman to start the distribution, HRVCB and Landbank officials distributed cash cards to around 250 who attended. The HRVCB has already approved 4,000 applications.

The announcement on the release could be found at the HRVCB website and Facebook account. But many of those who attended learned of the release by word-of-mouth from fellow Martial Law victims, as there were no mail or text message sent to them on the date of release.

Those who attended the May 8 ceremony advised those who were unable to attend to claim their cash cards at the Landbank Philcoa branch. They would be asked to present a government-issued ID, acknowledgment receipt from the HRVCB, Letter of Resolution from the HRVCB and a 1×1 ID photo. They would also be asked to fill up a one-page form, after which their cash cards would be released and they may withdraw money from it right away.

In 2013, Samahan ng Ex-Detainees Laban sa Detensyon at Aresto (SELDA), which led the filing of the historic class suit by more than 9,000 Martial Law victims against Ferdinand Marcos in a Hawaii court, hailed the signing of RA 10368.

“More than the monetary compensation, the bill represents the only formal, written document that martial law violated the human rights of Filipinos and that there were courageous people who fought the dictatorship,” said SELDA.

To the Martial Law victims, the law is a recognition in Philippine soil of the atrocities committed by the dictatorship of Ferdinand Marcos from the years of 1972 to 1986 (even if there was a Marcos announcement lifting Martial Law in 1981), after the US court ordered reparation for the victims.

The HRVCB processed the claims and they awarded points depending on the human rights violations endured by each victim. Each point is equivalent to P 25,000. The HRVCB said that the total estimated reparation money may still vary depending on the result of the deliberations of the remaining claimants.

The partial compensation that the 4,000 victims would get is 50% of the total amount that each victim was assessed to receive.

HRVCB said that a total amount of 300 million pesos has been released for the 4,000 claimants.

The source of the funds for victims’ reparation amounts to P 10 billion pesos plus interest, part of the funds transferred to the government of the Republic of the Philippines by virtue of the December 10, 1997 Order of the Swiss Federal Supreme Court. The Philippine Supreme Court adjudged the amount as Marcos ill-gotten wealth and forfeited it in favor of the government.

The list also includes National Democratic Front of the Philippines peace consultants Benito and Wilma Tiamzon, Vicente Ladlad and Randall Echanis, all of them experienced being charged with trumped-up cases and suffered illegal detention even after Martial Law.

Lito Ocampo, journalist turned activist during Martial Law and brother of Satur Ocampo, is among the initial 311 whose money reparations were ready for release on May 8. He attended the ceremony along with his brother, friends and acquaintances after he saw the announcement of HRVCB on their Facebook account.

Lito was given seven (7) points by the HRVCB. He said his main complaints were arrest and torture. He was also among those who filed a class suit against Marcos in a Hawaii court where they won, that’s why he said he is conclusively presumed a victim of Martial Law.

Lito was charged with conspiracy and proposal to commit rebellion by a special military court during Martial Law. He was tortured and detained for more than five years. But his biggest offense from the viewpoint of his captors may be that he is the brother of Satur Ocampo, a journalist turned high profile activist turned revolutionary in those days whom Lito sympathized in his pursuits to help bring Martial Law to an end.

“Para sa ganap na paghahanap ng hustisya, dapat managot ang Marcoses sa naganap na madidilim na araw ng Martial Law. Kaya tama ang panawagan na never again to the return of the Marcoses in power, pero nasa poder na naman sila (For the complete attainment of justice, the Marcoses should be made to answer for what happened in the dark days of Martial Law. It is correct to demand never again to the return of Marcoses to power, but they have remained in positions of power),” said Lito.

HRVCB sent claimants the resolution on their claims or appeals via post.

See the list of 311 claimants whose money reparations have been made available: http://hrvclaimsboard.gov.ph/index.php/partial-list-of-eligible-claimants-series-1-no-1

Ramon or Mon Ramirez, Martial Law victim and administrator Arkibong Bayan (People’s Archives), said they thought that Satur Ocampo would get nine (9) points given how heavily tortured he was during Martial Law. Satur told him he received eight (8) points.

In the ceremony in May 8, that became a reunion for anti-Martial Law activists, Ramirez said they made informed guesses on the points to be awarded for each victim whose experiences they were familiar and they found out the actual points through the resolutions or once they were called in the queue.

Section 19 of RA 10368, on the Determination of Award, provided that a point system ranging from 1 to 10 would be awarded on this basis:

Ramirez was given 5 points for the mental and psychological torture during interrogation and nine months of detention he endured during Martial Law.

SELDA officers met with President Rodrigo Duterte, the HRVCB and Cabinet officials in January 19 to find out how the processing of applications and release of compensation be expedited. SELDA lamented the situation of many human rights victims who have been dying one by one without receiving indemnification from the horrors they suffered during Martial Law.

The group was able to press for a partial reparation for 4,000 victims, or around 13% of the 30,000 processed applications at that time, and around 5% of the total applications the HRVCB received.

The HRVCB said that the Martial Law human rights victims are also entitled to non-monetary reparation to be delivered by other agencies of government.