Home OPINION Duterte’s plan to wait on vaccine from China, trust on military and... 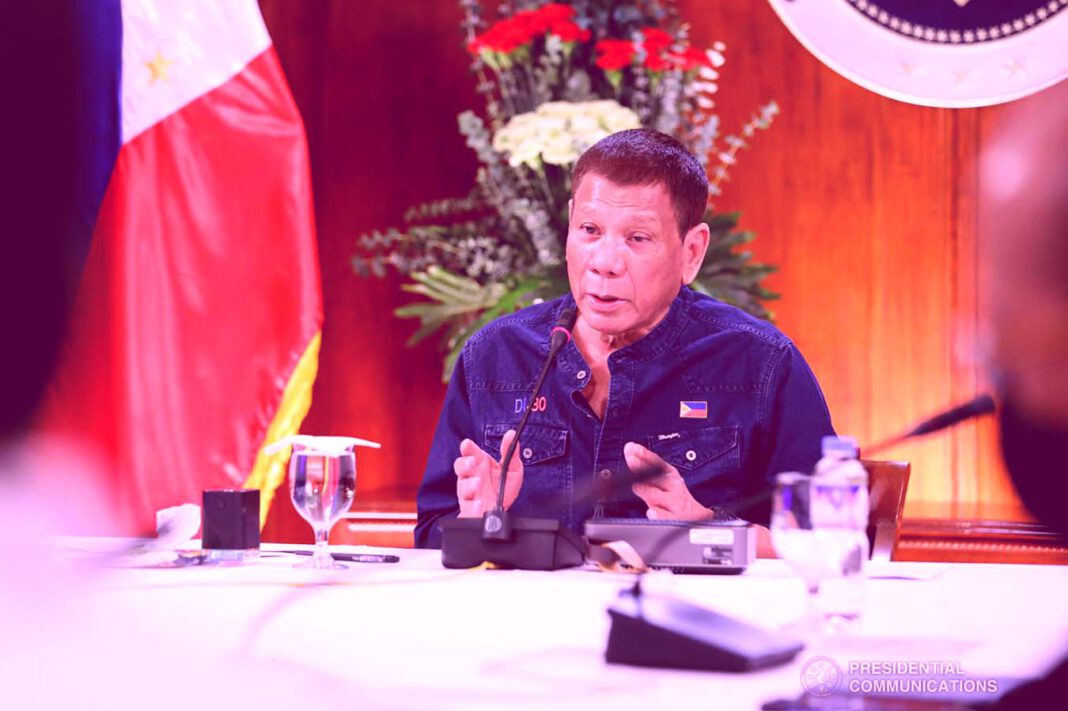 The recorded meeting of President Rodrigo Duterte with the Inter-Agency Task Force on Emerging Infectious Diseases was aired on July 31, 2020 at 9 o’clock in morning.

Aside from the updates on the status of the community quarantine in the different regions and provinces, school opening and adjustment in processing permits for the erection of towers by telecommunication companions, the main story is the vaccines for COVID-19.

[I have a vaccine. What I ask from you is to bear a little because of the contagion. Now more got infected because you can’t resist.]

It was as if he would deny or counter those who are saying his administration does not have a plan or roadmap to recovery, but he instead acquiesces to this by justifying that is because they have to talk budget or the medicine.

“Hindi nga kami maka-roadmap (We can’t do the roadmap) because we were talking about a budget. Ito, ito ngayong gabing ito. Hindi kami maka-ano ng (Now, this night, we can’t) — I could not have uttered a single sentence about roadmap to recovery kasi ang una talaga diyan ang medicine (the first thing about that is medicine),” said Duterte.

Duterte “promised” that by December, his government would have administered vaccines to the Filipino people, which he said, “the first priority are the poorest of the poor, the military and police, then the middle income and the third are the cabinet officials and the rich.”

By him, there is no “new normal” and we will go back to normal once the vaccine arrives. And that is there the virus does not mutate, which would then require a new vaccine.

Duterte lauded his own position of being friendly with China for now being told that we were China’s priority for the vaccines.

“Ang mapabubuti lang nito (The good thing about this is) to our credit is that we have remained friendly with China and China was able to guarantee, sabi nila dito sa akin (they told me here), that the Philippines would… Ito basahin ko na lang (I would just read)— Chinese Embassy: “COVID…” “China to give priority to the Philippines once the COVID-19 vaccine is successfully developed says Spokesperson Wang Wenbin at their regular press conference on July 28, 2020.” July 28 sinabi niya ‘yan (he said that),” said Duterte.

Duterte explained the procedure of acquiring the vaccines. Department of Finance Sec. Carlos Dominguez III helped him in explaining how the country can pay around Php 20 billion pesos for 40 million doses of vaccine.

[The Philippine International Trading corporation will buy the vaccines, then these will be turned-over to DOH to be used for the poorest of poor yet, the first and lowest 20 million in our country.]

Duterte denied that he said “there is no money” and that his statement was misconstrued as he meant there will be no money if there is no vaccine.

“Sabi mo noon, Mayor, walang pera, maubos na, ipagbili natin?” Sabi ko kung walang vaccine. [You said before Mayor, no money, it’s running out, should we sell? That’s if there is no vaccine.) That is why I have been repeating, “vaccine, vaccine, vaccine.” And kung walang (if there is no) vaccine, ‘pag tumagal ito mauubos na ang pera natin, mauubos talaga (if this goes on longer, our money will run out, it will really run out).

The military and police will help in the administration of vaccines. Duterte instructed the “poorest of the poor” to go to the military camps and police stations and let the “nurse” administer the vaccines for them. The people just “give their names and addresses” then the procedure will be completed.

Drug pushers, however, will not be given the vaccines. He also said he will ask the military to use bayoneta, not the needle, to vaccinate his enemies.

He said of the military’s role in vaccination, meaning continued role in the government’s pandemic response:

The miltary would be prioritized for the vaccines, but the rich also would not be given free vaccines.

[To the rich, do not think of me because I do not concern myself with you. Sorry. If you can afford. If I see you getting free vaccine… and there are some I want to inject with COVID-19, add virus in their body.]

Duterte of course included the New People’s Army in his speech. He told them to go to the military camps for the vaccines as they are Filipinos too and they don’t want them giving the excuse they didn’t have a fighting chance because they did not get vaccinated. He said those without vaccines are half walking dead and that he does not want them spreading COVID-19. After COVID-19, the fighting will resume, he said, but there is no unilateral ceasefire.

In his public address, Duterte gave an impression that the only hope for the people and the country amid this pandemic, the public health crisis, the economic crisis and the impending educational crisis is the vaccine. Duterte wanted the people to continue to have faith in his administration by promising something that is not there yet: a vaccine by December. This, despite many countries and health systems projecting the completion of a COVID-19 vaccine in a year or so. His alibi for the current dire situation of the country is the lack of vaccine.

While it is true that the vaccine is needed to stop the COVID-19 pandemic, the plan of the government and the hope of the Filipino people should not hinge on something that is yet to come to fruition. The government must do better now in addressing the pandemic and the effects of their failed response in the past months. Measures to prevent the continuing spread of the disease, if only the government knew how to listen the people’s voice and mobilize communities instead of oppress and repress them, can be efficiently and effectively done.

The people are clamoring for mass testing, contact tracing and providing quarantine facilities as early as March. However, the government officials hardened their hearts and continue implementing the government’s militarist policies and diverted funds for counter-insurgency and “balik-probinsya” program. Reports of over-pricing in the procurements of the PPEs and medical equipment are outrightly dismissed by the President himself.

He even speedily enacted the Anti-Terror Law to be used against the people, even as this pandemic causes more harm the people and worsen the people’s economic condition.

Pinning plans on something that is not there yet while the pandemic rages on is not actually a course of action or a plan. Making people depend on the vaccine that we are not producing and we have yet to get money to buy and line up for procurement is just trying to appease the people’s anger. This will do more harm than good.

He has already admitted that he is “inutile” in resolving in some issues like the intrusion of China in the West Philippine Seas. He is “inutile” in uniting the LGUs to concretely address the measures needed for COVID-19 prevention to spread. He is still “inutile” until now in providing basic services to the people in need of support.

As he is happy to toy with alcohol dispenser and accidentally spraying it into his mouth or risking health for using gasoline for disinfection, he has exposed himself as a joke amid this unprecedented crisis. The Filipino people must squarely face their joker of a ruler.