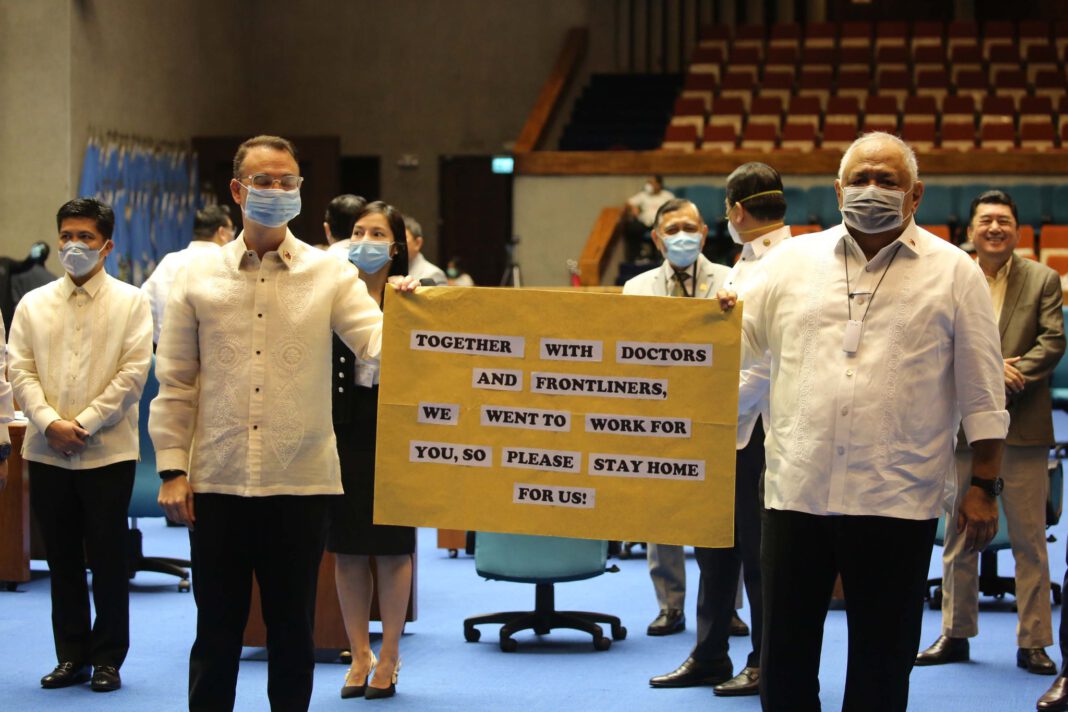 The House of Representatives and Senate of the Philippines convened in a special session on March 23 to table the request of President Rodrigo Duterte to grant him additional powers to address the address the COVID-19 outbreak in the Philippines.

The special session was held on the basis of Proclamation No. 933 issued by President Rodrigo Duterte, calling Congress to conduct a Special Session to ensure the availability of funds needed to address the adverse effects of this global pandemic.

The House of Committee of the Whole passed House Bill 6616, which would declare a national emergency amid the rapid spike of COVID-19 cases in the country. The legislation included the possible realignment of funding in the 2020 budget and the allocation of funds and investments of government agencies for the country’s response to the COVID-19 outbreak.

The bill also included giving the Chief Executive the power to secure more essential and medical supplies, such as personal protective equipment, good and other services.

The chamber allowed only 20 House Members, aside from the Speaker, to be physically present at the Batasan Complex in order to strictly adhere to the social distancing protocols

“After the imposition of a Luzon-wide lockdown, many residents rightfully complained of how their civil liberties were curtailed by law enforcers in the name of preserving public safety. We fear that a leadership with a militarist mindset and a government which has shown little empathy for the common tao will use the emergency powers to weaponize the COVID-19 campaign by centralizing political control and silencing the opposition,” said Bayan Metro Manila in a statement.

They also called Filipinos in quarantine to reject the emergency powers of Duterte and continue to assert our legitimate demands: Mass testing, food assistance, and the lifting of unnecessary lockdown restrictions.  “Let’s protest from our homes and communities to call for urgent relief, defend our rights, and protect our health. Let’s heal together by fighting as one!” said the group.

Kadamay Metro Manila said that the people are not assured that Duterte’s extra power will serve their interests, as it has no concrete and sound plan for how to save the people in COVID-19.

“What the people need is extensive free testing, assistance and food, and medical services to combat the dangerous virus. What the poor need is to properly and efficiently allocate basic daily necessities rather than providing emergency power or further authorization for Duterte to rob the city, abuse of rights -humanity, and violence to the people,” said Kadamay Metro Manila in a statement.

“What the Filipino workers and people need at this point are emergency responses and adequate aid from the national government and not any form or emergency or extra special powers for the executive branch,” said Thadeus Ifurung, Defend Jobs Philippines spokesperson.

The group also reiterated that instead of emergency power, the national government should order the Labor Department to grant inclusive and non-discriminatory emergency cash assistance to all workers who lost their sources of income regardless whether they are formal or informal workers, ensure jobs security of our working people and provide free mass testing to ensure the health and safety of our labor force and their families.

Bayan Metro Manila also despised that the session “became a self-serving spectacle that gave Duterte a bigger hoard to be dispensed to loyal legislators.”

The group referred to the Lower House’s photo op – with House Speaker Alan Peter Cayetano and some legislators holding a manila paper with the message: “Together with doctors and frontliners, we went to work for you, so please stay home for us.”

“It is hypocritical for Congress to feign concern over the struggling health sector when it connived with the president in slashing the funds of public hospitals in 2019. The same cabal of politicians who allowed the misprioritization of government expenditure in favor of debt-servicing and bloated military funding,” said the group in its statement.

While both chambers of Congress held their respective special sessions, #DuterteResign was among the trending topics on Twitter.

Just a few months back, they were downplaying the outbreak. When the World Health Organization declared the disease a pandemic, our health secretary even aired his personal disagreements. Now, they’re asking for emergency powers. It’s an admission of failure. #DuterteResign

They're acting like they're the heroes of this epidemic, when, in fact, they have done almost nothing effective to mitigate the spread of the virus in the past two months. Ang kakapal ng mukha. #DuterteResign #NOtoVIPTesting #MassTestingPH https://t.co/6YKezigSeT

Granting emergency powers to Duterte would mean giving him powers to kill more people with his incompetence, and to advance the greedy interests of his cronies. #DuterteResign #NoToEmergencyPowers

Vico Sotto, Leni Robredo, frontline health workers have no emergency powers yet they have done more than this idiot from Davao.

Why give emergency powers to the person who let all this happen by choosing his Chinese friends over public health?#NoToEmergencyPowers#DuterteResign

What we know so far:

1. No concrete plans other than getting P275B

2. Duterte has access to 1.7T even WITHOUT this Bill

3. There are Congressmen who think its unconstitutional

4. Congress railroading this bill because they "trust the President"?#DuterteResign https://t.co/q8sX7cSa6N