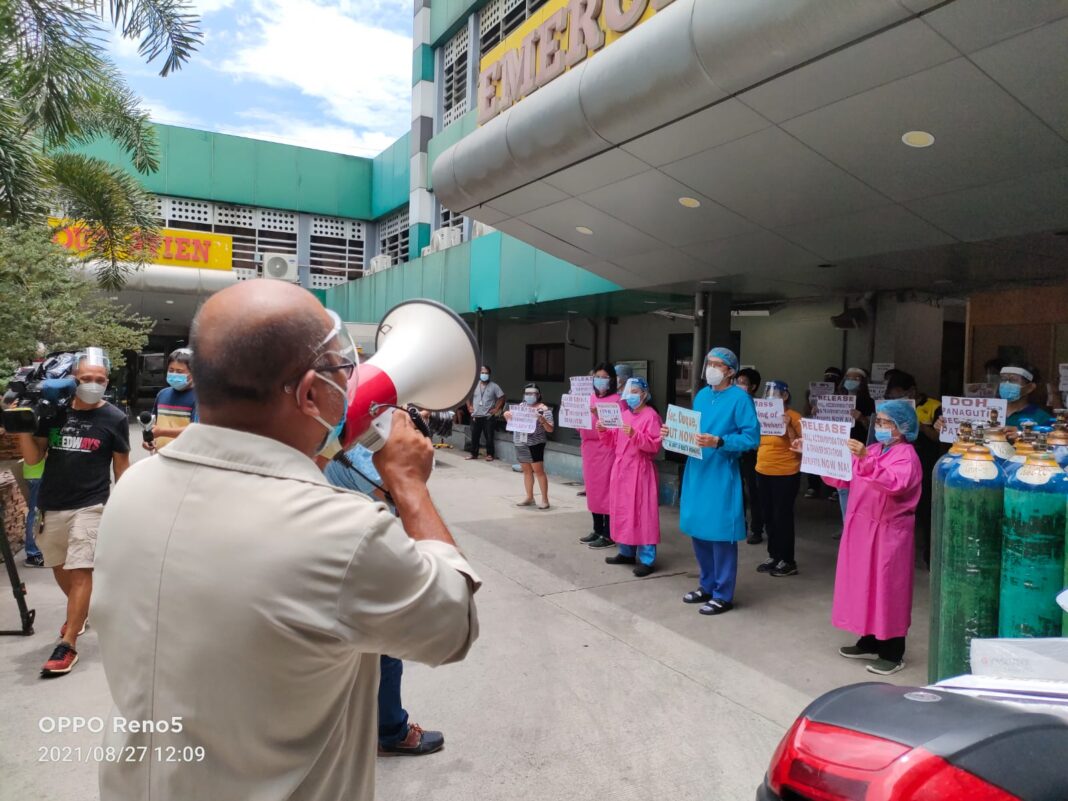 President Rodrigo Duterte’s administration, including the Department of Health (DOH), was criticized over the meager budget for health workers’ special risk allowance (SRA). The budget released on August 25, 2021 was only for 20,000 health workers, instead of at least 67,000 in DOH hospitals alone.

That is why, on August 27, Tondo Medical Center health workers protested inside the hospital premises over what they deem as the administration’s lack of concern and gross negligence for medical frontliners.

On August 21, Duterte gave the DOH and Department of Budget and Management 10 days to pay the health workers’ benefits.

“Iyong mga nagrereklamong frontliners about their allowances, or about whatever, pati itong volunteers na magbakuna, I am ordering Secretary Duque, bayaran mo. Use whatever money there is,” Duterte said in a taped speech aired on August 21.

[Those frontliners who are complaining about their allowances, or about whatever, including these volunteers in the vaccination rollout, I am ordering Secretary Duque, you pay. Use whatever money there is.]

“We are the living victims of this pandemic…The government’s own strategy in the COVID-19 is flawed and the Bayanihan laws themselves are also flawed,” Tondo Medical Center Employees Association- Alliance of Health Workers (TMCEA AHW) President Ernesto Bulanadi said.

Tondo Medical Center, a DOH hospital, received only 30% of the funds intended for the meals, accommodation and transportation (MAT) allowance of its health workers covering the period of September to December 2020. The remaining 70% or P14M of the funds was withheld by the DOH.

TMCEA-AHW demanded the release of AHDP benefits to all public health workers from January- June 2021. The group asserted that this should be an added COVID-19 related benefit.

The group demanded the immediate release of all COVID-19 benefits and to release SRA to all health workers.

The health workers’ union denounced the Bayanihan law’s own provision regarding coverage of who should receive the SRA benefit leading to multiple interpretations and becoming a barrier to health workers not being able to receive the benefits, such as the term “directly and in contact with.”

Under the Bayanihan to Recover as One Act or ­RA 11494, SRA is only of the many COVID-19 benefits that a health worker may receive. There are also the meal, accommodation and transportation allowance, active hazard duty pay (AHDP) and the COVID-19 compensation sickness benefit.

The second pandemic response law was approved by Duterte on September 7 and was effective up to December 19, 2020. The third Bayanihan law, Bayanihan to Arise as One, has yet to be signed into law. The Lower House of Congress approved its version by the start of June. In the meantime, there is no enabling law for government pandemic response since the end of last year, from which cash aid for the poor and pandemic spending were being allotted.