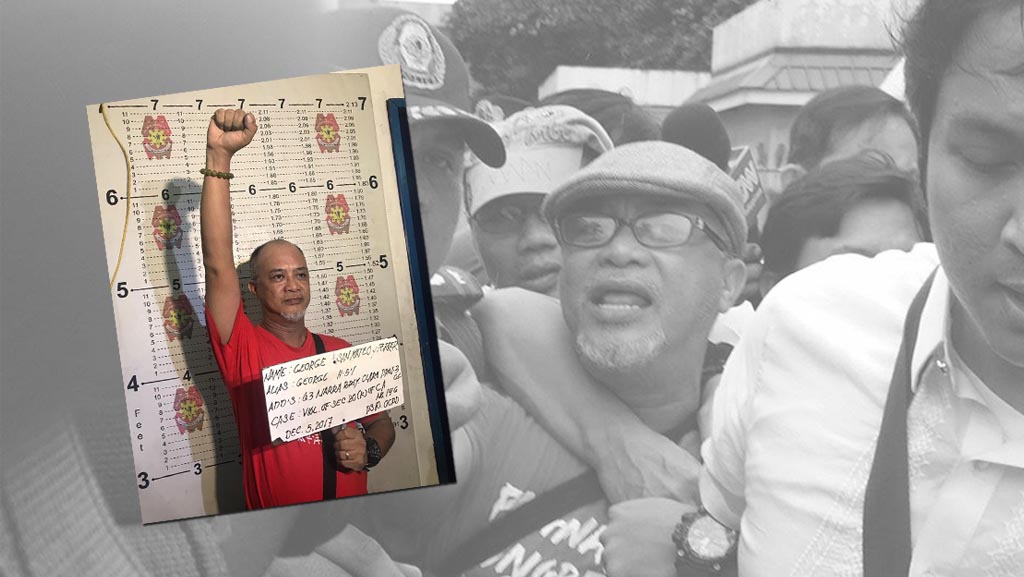 PISTON President George San Mateo was arrested in the Quezon City Hall of Justice as he was entering the court to submit himself and post the P4,000 bail recommended for charges filed against him.

San Mateo was cordoned and dragged by policemen and brought to the Quezon City Police District (QCPD) Station 10 in Kamuning, where he underwent booking procedures and his mugshots were taken.

He was then brought back to the court to post bail and was released.

San Mateo’s legal counsel, Atty. VJ Topacio, described the arrest as an overkill due to the number of arresting officers and policemen surveying the area.

At 9pm on December 4, armed elements of the Philippine National Police barged in the Kilusang Mayo Uno (KMU) National Office in Quezon City to serve a warrant of arrest against San Mateo who is also a KMU National Council Member.

The arrest warrant was issued by Judge Don Ace Mariano Alagar of the Quezon City Metropolitan Trial Court Branch 43 on December 1, days after San Mateo announced that the PISTON and No To Jeepney Phaseout Coalition intend to hold a two-day transport strike.

It stemmed from a complaint filed by the Land Transportation Franchising and Regulatory Board (LTFRB) for violation of Section 20 (k) of the Commonwealth Act No. 146 or The Public Service Act, a law passed in 1936 because of San Mateo’s role in the February 27 transport strike.

In the law, the provision that San Mateo violated in the law states that causing others to join or participate in an activity which will result to a public service corporation to neglect or fail to perform its duty will be imposed fines and imprisoned for a maximum of two years.

Topacio said even if the law remains ‘constitutional’, there were not even jeepneys in the 1930s and it was laughable that this was the only law they could find for now to charge against San Mateo.

San Mateo was supposed to have asked permission from the Public Service Commission of the Department of the Justice (DOJ) before holding their protest. The office does not appear in the DOJ’s current organizational structure.

“Activist George San Mateo should not have been arrested anymore en route to filing bail as he was voluntarily and publicly surrendering already for a relatively petty yet harassment suit which is bailable anyway.

The arrest despite pleas for reason and common sense shows the highhandedness of our police who discriminates between the rich and powerful and the poor and exploited.

The message is clear: the “well coiffed” plunderers and killers are different from the “scrungy” activists in the eyes of the law.”

KMU expected that more charges would be filed against San Mateo and PISTON leaders in the coming days.

“The cases filed against San Mateo and other PUJ drivers and operators opposing the jeepney phaseout program are fabricated, baseless and are obviously aimed solely to quell the growing outrage among drivers, operators and commuters against Duterte’s anti-poor policies,” said the group in a statement.

This morning, Senator Grace Poe, chairperson of the Senate public services committee, protested the arrest of San Mateo in a statement.

“Although we respect the independence of the courts, the timing of the release of the arrest warrant is suspect and casts doubt on the intent of the complainant in filing such charges. The PUV modernization program should be borne from a democratic process and not from underhanded tactics. After all, it is through the labor and industry of these jeepney drivers and operators that our commuters are able to travel from one point to another despite the failure of the government to provide better mass transportation options.

Everyone has the right to peaceably assemble. It is unclear based on the cited section of the Public Service Act what exactly San Mateo violated. If holding a strike is tantamount to a violation under any memorandum of the LTFRB, then the proper penalty should have been a fine or suspension or cancellation of their franchise, not threatening their leader with incarceration.

All told, this confusion is a manifestation that the PSA has to be revisited and studied carefully to result in a more balanced interplay between public service, on the one hand, and the right to peaceably assemble, on the other hand.

Piston and other transport groups have agreed to a dialogue called by my committee on Monday. With their entire livelihood at stake, the least we can do is hear them out. Moving forward, let us give them and other stakeholders a chance to explain so that we can resolve their issues together.”

Poe requested PISTON and No To Jeepney Phaseout Coalition to call off their December 4 and 5 transport strike, that the transport heeded, and called for a hearing to discuss issues confronting the transport sector, including the government’s jeepney modernization program.

“The PUV modernization program should be borne from a democratic process and not from underhanded tactics. After all, it is through the labor and industry of these jeepney drivers and operators that our commuters are able to travel from one point to another despite the failure of the government to provide better mass transportation options,” Poe said.

Poe also said that the government appeared to not be ready for the  modernization program.

The program would effectively start with the jeepney phaseout on January 2018, even if the other components have not been met.

Holding a copy of San Mateo’s arrest warrant and citing the charge of Section 20 violation, Roque misquoted the violation in a press briefing before noon:

“I quote, Section 19 of the law says, ‘It shall be unlawful for any public service to provide or maintain any service that is unsafe, improper, or inadequate or withhold or refuse any service which can reasonably be demanded and furnished, as found and determined by the Commission in a final order’.”

San Mateo was back in the streets in no time. At 5pm today, drivers along with the ‘recently freed’ San Mateo held an indignation protest against the leader’s arrest at the Boy Scouts Circle in Quezon City.