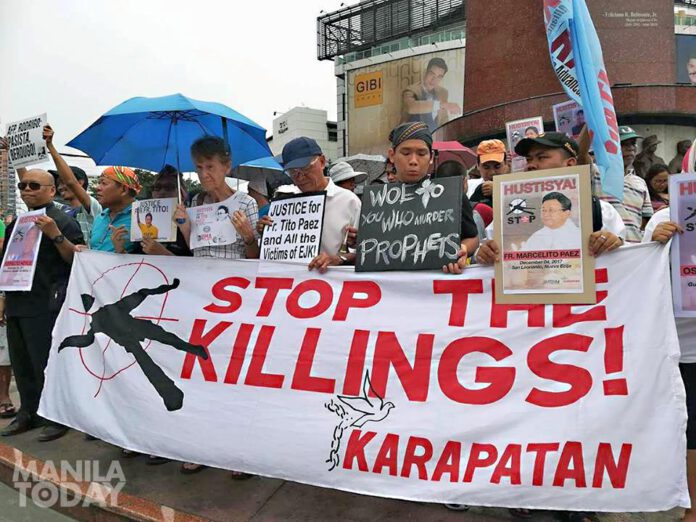 On December 4, Fr. Marcelito “Tito” Paez was shot by a riding-in-tandem at 8pm while driving his vehicle at San Leonardo, Nueva Ecija. He was brought to the hospital but was declared head a few hours later. Earlier that day, Paez assisted in facilitating the release of political prisoner Rommel Tucay who was detained at the Bureau of Jail Management and Penology jail in Cabanatuan.

On December 3, Pastor Lovelito Quiñones of the Kings Glory Ministry, a resident of Sitio Anapla, Brgy. Don Pedro, Mansalay, Oriental Mindoro was shot by soldiers belonging to the Regional Mobile Group (RMG). at around 8-8:30pm. Quinones was on his motorcycle on his way home when he passed by the area near an alleged encounter site of the Armed Forces of the Philippines (AFP) and New People’s Army (NPA). He was only five minutes from his residence when he was shot in the chest. He died instantly.

The Kilusang Magbubukid ng Pilipinas reported that the kin of the victim attested that elements of the RMG planted a .45 calibre near the pastor’s body, but the paraffin test on him yielded a negative result. The 203rd brigade of the Philippine Army claimed that Pastor Lovelito was an NPA, an accusation belied by his family and church.

Karapatan, Promotion of Church Peoples’ Response, Nicodemus Solidarity and other church groups held an indignation rally at the Boy Scouts Circle in Quezon City today to decry the killings of Paez and Quiñones.

“Killing Fr. Tito would never silent the men and women of God, rather, it ignites and deepens our commitment to serve the basic masses, to whom Fr. Tito offered his entire life,” said Fr. Dionito Cabillas, Stop the Killings Network Metro Manila Spokesperson.

“We urge the Duterte administration to pursue the peace negotiations with the National Democratic Front of the Philippines, retract his pronouncements of threats against legal and progressive organizations, and stop all killings,” demanded Cabillas.

The Rural Missionaries of the Philippines called for justice for Fr. Paez and described the priest in their Facebook post on December 4.

“Rev. Fr. Tito Paez, who belonged to the Diocese of San Jose City, is the coordinator of the Rural Missionaries of the Philippines in Central Luzon. He was a former parish priest of Nampicuan town, and known for his progressive advocacies. In the 80s, he was also a leader of the Central Luzon Alliance for a Sovereign Philippines (CLASP), which campaigned for the removal of the US military bases in Central Luzon and other parts of the country, and against the Bataan Nuclear Power Plant. He was gunned down earlier tonight by believed-to-be state security forces.”