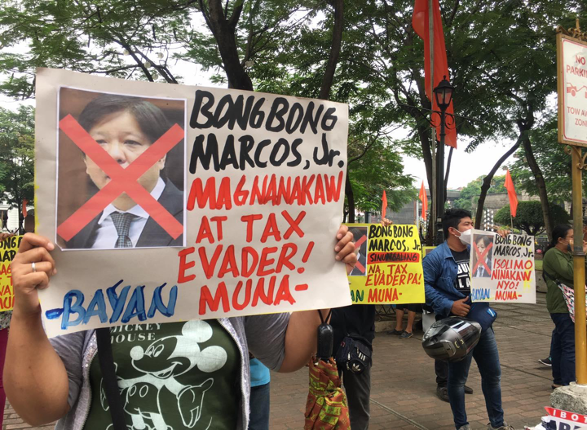 The Commission on Elections (COMELEC) confirmed on Monday, November 29, that they already raffled to COMELEC 1st Division the disqualification case filed by martial law survivors against Ferdinand “Bongbong” Marcos Jr.

The Comelec 1st division is comprised of Commissioner Marlon Casquejo, Aimee Ferolino, and Rowena Guanzon. Casquejo and Ferolino, who are both from Davao, were appointed as commissioners by President Rodrigo Duterte in 2018 and 2020. Guanzon, on the other hand, is appointed by Duterte’s predecessor, the late Benigno Aquino III.

The petition, on which the case was based, was submitted on November 17 by martial law survivors led by the Campaign Against the Return of the Marcoses and Martial Law (CARMMA) convenor Bonifacio Ilagan. He was joined by Bayan Muna representative Satur Ocampo, former Gabriela representative Liza Maza, and other rights groups and leaders.

The petition was filed through election lawyers Howie Calleja and Jake Rey Fajardo, seeking to ban Marcos from running in the 2022 presidential elections for violating the Omnibus Election Code.

The original petition alleged falsified information and misrepresentation in Marcos’ certificate of candidacy in connection to his 1997 tax conviction.

“Far from being a “predictable nuisance petition” — as the camp of the dictator’s son has dismissed it — the petition highlights the continuing Marcosian legacy of lies and crimes against the Filipino people. These lies and crimes Marcos Jr. has repeatedly whitewashed and refused to acknowledge in his crass bid to pave the comeback of his tyrannical family in Malacañang,” said CARMMA in their November 4 statement.

CARMMA also called Marcos’ presidential bid a “mockery” of democracy and electoral processes for his “audacity to falsify his own material representation in his certificate of candidacy.”

In his certificate of candidacy, Marcos attested his eligibility to run for presidency declaring clean amid any crimes. This was despite receiving the final decision on his conviction for the non-filing of income tax returns (ITRs) in 1997.

The petitioners later withdrew their original petition invoking Marcos’ misrepresentation together with his tax conviction, as it can potentially lead to summary dismissal.

On November 26, the COMELEC confirmed that the petitioners filed a new petition solely invoking Marcos’ tax conviction as a ground for perpetual disqualification.

Conviction as a basis for DQ

In their final petition, the martial law survivors cited Marcos’ 1997 conviction as the basis for the cancellation of his candidacy. It was related to his failure to file income tax returns (ITR) during his tenure as a government official in Ilocos Norte from 1982 to 1985.

In 1995, Marcos was found guilty beyond reasonable doubt by the Quezon Regional Trial Court (RTC) for violations of Sec. 45 and 50 of the National Internal Revenue Code of 1977, as amended. He was sentenced to two six-month and two three-year jail sentences for failure to file and pay income tax returns from 1982 to 1985. He was also ordered to pay corresponding taxes with interests and penalties to the Bureau of Internal Revenue.

In 1997, the Court of appeals acquitted him of non-payment of tax deficiencies but found him guilty of failure to file income tax returns. For the cases he was convicted, he was also ordered to pay the deficient income taxes and fines with surcharges.

Other DQ cases vs Marcos Jr.

Apart from the disqualification case filed by martial law survivors, Marcos Jr. faces three more challenges to his candidacy raffled to the Second Division. These cases seek to declare him a nuisance candidate or seek to cancel his certificate of candidacy.