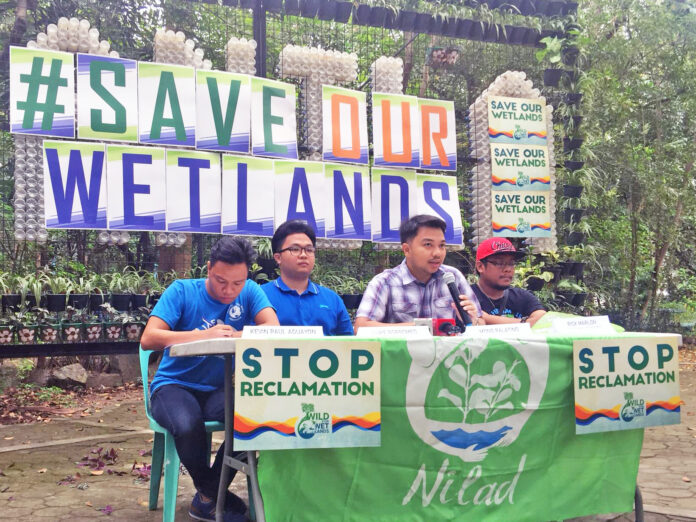 Green groups, Nilad and the organizations under the Wild for Wetlands Network including the Earth Island Institute-Philippines, Save Freedom Island Movement and the Save Laguna Lake Movement, today joined the public clamor against the proposed charter change (Cha-Cha) of the Duterte administration.

In their press conference today at the Arroceros Forest Park in Manila, environmental activists said that Cha-Cha will only mean intensification of environment plunder in the country.

Joining the clamor of groups that argued that Cha-Cha is anti-poor and anti-Filipino, Nilad added that it is also a threat to the environment.

Panelists displayed their green hearts placards to symbolize their call for ‘Green Valentines’ and demand for the present government to show some love for the environment by stopping Cha-Cha and by implementing a total reclamation ban nationwide.

Nilad cited that based on the Resolution of Both Houses No. 8 (RBH8), proposed provisions under Article XII could have a detrimental impact on the environment.

According to the group, Section 2 of RBH8 grants Congress the power to allow foreigners or 100% foreign-owned corporations the power to solely exploit our natural resources. Foreigners can also own lands including agricultural lands under RHB8 Section 7.

Also, under Section 3, the State or Regional Legislature can grant and allow private corporations the power to lease more than 1,000 hectares for more than 50 to 100 years.

Meanwhile, green groups also scrutinized the president’s party PDP-Laban proposal that will allow the opening up, or the sale or lease of reclaimed or forest lands to transnational corporations. The proposal also deleted the provision in the 1987 Constitution, which said that “alienable lands of the public domain shall be limited to agricultural lands.”

PDP Laban also deleted provisions in the present Constitution saying that “private corporations or associations may not hold such alienable lands of the public domain except by lease, for a period not exceeding twenty-five years, renewable for not more than twenty-five years, and not to exceed one thousand hectares in area.”

“Allowing foreigners to own lands will not only worsen landlessness in the country. It will also displace poor Filipinos from their farming communities and ancestral domains,” said Kevin Paul Aguayon, Nilad spokesperson.

He added, “Allowing foreigners to exploit our natural resources will unleash more development aggression projects in the rural areas, which could exacerbate the deteriorating condition of the environment. It will pave the way for the unbridled exploitation of ancestral domains and even protected habitats by profit-hungry corporations and their powerful backers in the bureaucracy.”

“Cha-Cha boosts the business prospects of mining, logging, and other sectors of the extractive industry at the expense of preserving our natural resources,” Aguayon stressed out.

Meanwhile, Nilad saw the proposal to broaden the category of ‘alienable lands’ could be intended to allow the selling of reclaimed lands that could lead to a ‘reclamation surge or boom’ by enticing politicians and policymakers to hasten the process of approving reclamation projects across the country.

There is a pending government blueprint for reclamation numbering to more than 100 projects all over the country. About one-third of these reclamation proposals are focused in Manila Bay.

“Reclamation is extremely harmful to the environment,” said Aguayon.

Nilad said that reclamation destroys wetlands and marine resources that adversely affect our biodiversity. It also affects the livelihood of thousands of coastal residents and fisherfolks and promotes a development model that favors big business instead of enhancing sustainability and climate change-readiness of communities, according to the Nilad leader.