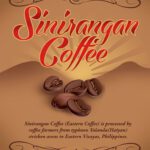 If coffee gives you a certain feeling of easiness or restlessness, for typhoon Yolanda (international name: Haiyan) survivors in some towns in Eastern Samar, coffee gives them hope.

Since typhoon Yolanda devastated the Eastern Visayas in November 8, 2013, the number of death toll has risen to more than 6,000, with 1,061 people still missing, according to the latest report by the National Disaster Risk Reduction and Management Council (NDRRMC). On the other hand, those who survived have not yet fully recovered from the wreckage.

Considered the deadliest typhoon to make a landfall in the country, government data estimates damage of almost P90 billion to both infrastructures and agriculture sectors, but many non-government and people’s organization say these estimates are conservative. Ten months after that fateful day, hunger and death hound those who survived the super-typhoon and storm surge.

The Warays of Eastern Visayas are traditionally rice and coconut planters. Rice produce amounts 2.26% of agricultural yield and 21% of the local (or national) economy of our country in 2013, while coconut makes 4% of the economy of the same year. Though, big landlords dominate vast lands in Eastern Visayas and this situation, as anywhere else in the country, has kept farmers poor and hungry and unable to afford their own crops, causing them to turn to the next most viable source of living: the coconut. The Warays have also long thrived on the many products and byproducts of the coconut trees. But after typhoon Yolanda flattened huge parts of Eastern Visayas to the ground, they will have to wait for almost a decade before they can depend on the coconut once more.  Since it would take an average of eight years for the coconut trees to re-grow and bear fruit, the typhoon survivors are faced with the predicament of surviving a long-term drought in their main source of livelihood.

Buligay (the Waray term for ‘Tulungan’)

So the people decided not to wait any longer.

Tabang Sinirangan Visayas, a multi-sectoral and inter-regional group whose main organizers include the victims themselves who seek aid from different organizations, with the help of the Congregation of the Most Holy Redeemer (Redemptorist missionaries), gathered local residents, including farmers, local government officials and women, from several towns in Eastern Samar province to establish an alternative source of livelihood.

According to Bro. Ciriaco Santiago III, CSsR, head of the Permanent Commission on Social Mission Apostolate of the Redemptorist missionaries, they have two choices as alternative: coffee and cacao. Both are suitable for the type of land they have in Eastern Visayas, composing of highlands. But since the place actually have a history in growing coffee plants, they thought it would be an easier and practical venture. Besides, aside from the livelihood these coffee plants are to provide, planting in mountainous areas would also help prevent soil erosion.

On the part of the Redemptorist missionaries, this livelihood project seeks to provide sustainable and alternative livelihood opportunities to typhoon victims. It started last July in the town of Quinapondan in Eastern Samar, and eventually reached nearby towns, including MacArthur, Llorente, and Giporlos.

Coconut-turned-coffee farmers have planted coffee seedlings on the first week of August, and will only start to yield after 1 ½ to 2 years. That is why, for now, missionaries buy coffee beans from Benguet and Bukidnon. A house was rented and turned into a processing center where coffee beans will be roasted and packaged by locals. They hope that once the coffee plants have yielded, they would have their own produced beans to be processed.

This month, volunteers plan to go back to Eastern Samar to help locals rejuvenate old coffee plants. According to Santiago, there were unused coffee plants which were part of a project by the local government. However, those plants were not used because of the lack of processing facilities before.

Labeled as Sinirangan (the Waray term for ‘Eastern’) Coffee, the coffee is made from robusta and arabica coffee beans roasted by coconut-turned-coffee farmers. The label carries the description “Sinirangan Coffee is processed by coffee farmers from Typhoon Yolanda affected areas in Eastern Visayas, Philippines.” Not for appeal or identification, but perhaps printed there to show to the world that the typhoon survivors are still trying their best to survive.

The coffee business enterprise and processing trade provides jobs and income to the locals at the roasting and packaging stages of production. For processing the beans, a farmer could earn P333.00 per day, which is actually higher than the expected P260.00 income in the province. The coffee also offers income-generation opportunities to its individual and commercial re-sellers, where they get 60% of the earning’s share.

With this new alternative, they hope to reach both local and foreign markets. When production and distribution expands, then the jobs that have been created may become permanent and more stable and perhaps create more jobs. Right now, there are already 16,800 coffee trees growing in four towns.

Since locals do not have a stable source of income, what they earn from roasting coffee beans and re-selling provides them the money which they can use to buy food.

On September 9, Department and Social Welfare and Development (DSWD) Secretary Dinky Soliman confirmed that approximately P2,784,900.00 worth of relief goods for typhoon victims were lost due to “improper handling” that led to spoilage. The DSWD offered that un-spolied canned goods within the mostly spoiled relief packs will be re-packed and still be utilized. Moreover, according to a Commission on Audit (COA) report, bottled waters costing P69,296,400 were not delivered to Tacloban City “due to lack of transport facilities.”

“From soil to cup”

In the Philippines, places more known to produce coffee are Batangas and Benguet in the North, and Davao region in the south. Coffee plantations in Davao region are managed in collaboration of Nestlé Philippines, Inc. (NPI), a multinational company, and the Department of Agriculture (DA) in Davao. Several areas were already developed and transformed into coffee farms, along with building of coffee processing plantations, in which local residents work. NPI and DA plan to complete the expansion of coffee farms in the Davao region by 500 hectares in the next three years. Their products called ‘Nescafé’ we often see in grocery stores. Last 2012, NPI also launched Nestlé Lipa Integrated Commercial Center (Nestlé LICC) in Lipa, Batangas City, which intends to provide the “development” they deem for local coffee planters.

Most of the coffee available nationwide are those manufactured by multinational companies. That is why there is a challenge for the likes of Sinirangan coffee, an all-local produced coffee to compete with other products. According to Santiago, they call it “from soil to cup” because the locals are solely responsible for the whole process of making coffee—from planting to packaging. As a result, all the profit that they will get from the coffee beans will be directly used for their interests. They will also have the power to determine the price of their products.

Sinirangan Coffee is a coffee that is from the small farmers and reaps gains for its producers, unlike the more common and perennial situation of backbreaking work and fruitless harvest of farmers in a country where land is concentrated in the hands of a few.

The aroma of this Sinirangan coffee would hopefully not only bring the typhoon victims an idea of hope, but also a sense of freedom—from the dire poverty made worse by the inutility of the government to provide immediate and appropriate relief and rehabilitation efforts and continuous long-term support.