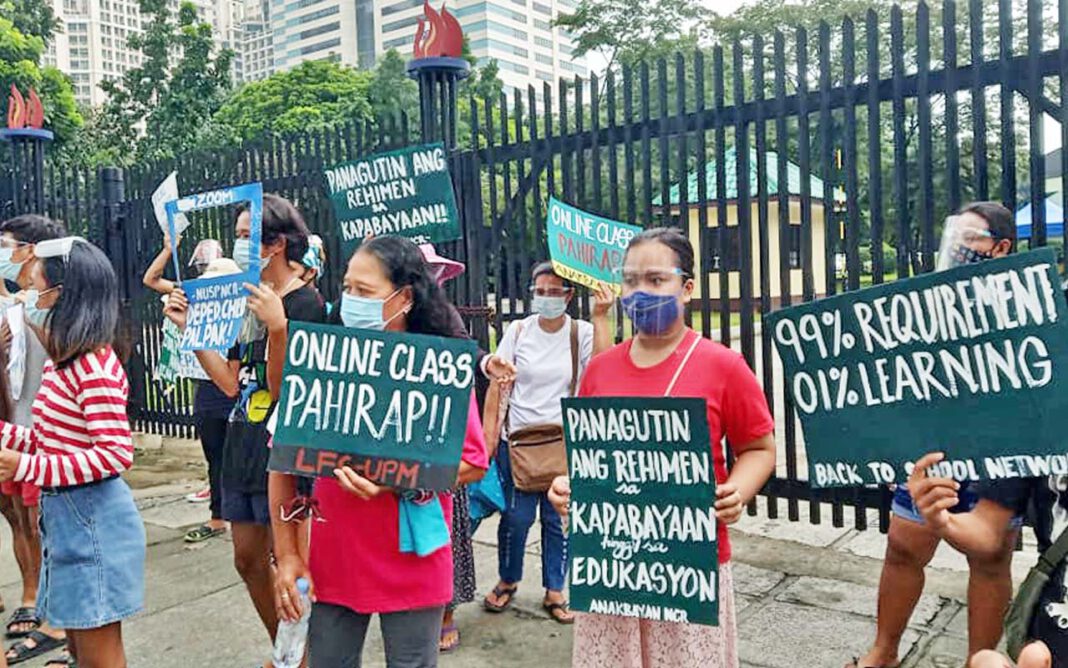 A month after the reopening of classes through distance and flexible learning in the country, an alliance of students and their parents trooped to the head office of the Department of Education (DepEd) in Pasig City on Tuesday to criticize the government’s refusal to solve online and modular learning woes.

Back to School Network said the legitimate demands and grievances of Filipino students have fallen on deaf ears despite an increasing number of youth showing dissatisfaction with the current educational setup and committing self-harm for not being heard.

“Time and time again, the DepEd proves that it does not serve the interests of Filipino students. It would rather open its doors to capitalist educators who have been pushing for fees increases, instead of heeding the just demands of students and initiating a genuine negotiation with affected students and parents,” the group’s spokesperson, Joshua Sales, said.

The network, composed of students from various levels and parents from various cities in Metro Manila, said a broad array of sectors has already been affected since the closure of schools, with the government exacerbating their problems due to its misplaced priority.

“Many other countries, our country’s own neighbors, prioritized the reopening of schools so that the lives of the children and the youth would not be negatively affected by the extended lockdown that forced them to be cooped up at home, facing gadgets all the time, and little to no social interaction. Poor students do not have gadgets or amenities at home, so they are basically doing nothing in relation to their learning until the modules from DepEd came,” said Sales.

Sales and other youth protesters said the DepEd must “begin opening its doors to various sectors that have been placed at the receiving end of the government’s incompetence.”

“Until now, we have yet to see the government’s response to the calls of other sectors affected by the closure of some schools. They are not only numbers; they have names and families to feed amid a coronavirus pandemic,” Sales said, citing that janitors, guards, canteen operators, among other stakeholders within schools lost their jobs and livelihood.

Sales also noted how the government has allowed tourism with no age limits, reopened tourist spots, amusement parks, but left school re-opening behind.

“Many students walk to school sometimes with no baon, they don’t need to spend anything and they can learn, and this gives them hope for their future despite their poverty. It is a wonder what government wanted to imbibe in the youth, to cater to the people these tourist spots but show no commitment to reopening of schools. Which is more essential?” asked Sales.

The group brought letters from students around Metro Manila that they have gathered “so that the DepEd would hear from the students themselves.”

Distance learning, the only option given
The DepEd heeded President Rodrigo Duterte’s order to have no physical classes until there is no vaccine and came up with distance mode of learning. In the agency’s learners’ survey, most have chosen the modular form of learning, as lack of gadgets, internet connection or signal were the main barriers to full online learning, even in the country’s capital region.

“Vaccine czar Galvez said the bulk of the vaccine will realistically arrive by end of 2020, so will schools be closed for two academic years?” asked Sales, saying the government did not give a timeline for the reopening of schools, except saying “it depends on the IATF.”

In a discussion yesterday, the group revealed stories of students and parents in the first month of distance learning: parents burdened with teaching their kids, students burdened to learn on their own, lack of load for internet, and weak internet connection among others. Students and parents are also concerned about the quality of education through this form of learning.

In many poor communities in Metro Manila, they have encountered students who did not enroll due to financial concerns and because they cannot cope with distance learning—the only mode of learning offered by the government, while some have lost interest and preferred to look for jobs as their parents also lost their jobs or livelihood. The DepEd placed the number of unenrolled or dropouts at 2.7 million, but this could be higher given the number was based on last year’s enrolment. Each year, enrolment in elementary and high school increases by almost a million.

Because of this, they said, many are considering to drop out while many are just “winging it”—but for how long must this continue, they asked.

The group recommended that the Duterte administration should look into reopening schools and the implementation of health measures, which is internationally considered as the “new normal” in education as long as there is no COVID-19 vaccine.

Back-to-school with health measures
“This time around, schools could actually have clinics with the needed equipment and supplies and actual health workers, and not just one of your teachers multitasking. They should have sufficient washrooms with running water. There should be distancing, so there should be a smaller class size and this can be implemented if students go to school on alternating days, at least 2 days a week, other days for modular learning. These are some things that the public schools should now have, what most did not have even before the pandemic,” Sales said.

Sales also said that teaching and non-teaching personnel should get regular COVID-19 tests. Some instances, maybe a student or a class may also need tests. There should also be a steady supply and free distribution for face masks, alcohol and soap.

Should there be a case or an outbreak in schools, classes can be suspended for the school or for that section, in the same way transmissions should be responded to and curbed and as is being done in countries that have reopened schools.

At that rate, reopening schools can be costly and would need sufficient budget and prioritization for education and health, which is maybe why the government is refusing to reopen schools, said the network.

“The government should not waste the public coffers to pacify or undermine the legitimate demands of the Filipino students, of human rights defenders and activists,” the group said.

The National Task Force to End Local Communist Armed Conflict (NTF-ELCAC) is poised to receive an amount of at least P19 billion that the Lowe House earmarked for its so-called Barangay Development Program.

During a House hearing on the proposed 2021 national budget, the Commission on Audit (COA) flagged that the NTF-ELCAC’s budget for this year as “quite big.”

“This is quite big (funds given to NTF-ELCAC). We have to look at it carefully because the amount involved is not typical,” COA Chairperson Michael Aguinaldo said.

The state auditor assured that the 2020 budget of the anti-communist task force, which has been known for branding activists, journalists, and other oppositionists as “communist-terrorists fronts,” would undergo special audit.

The Back to School Network called on the Filipino students to remain steadfast in pushing for an educational system that is responsive to the needs of the Filipino youth and calling out the “misplaced priorities” of the government.