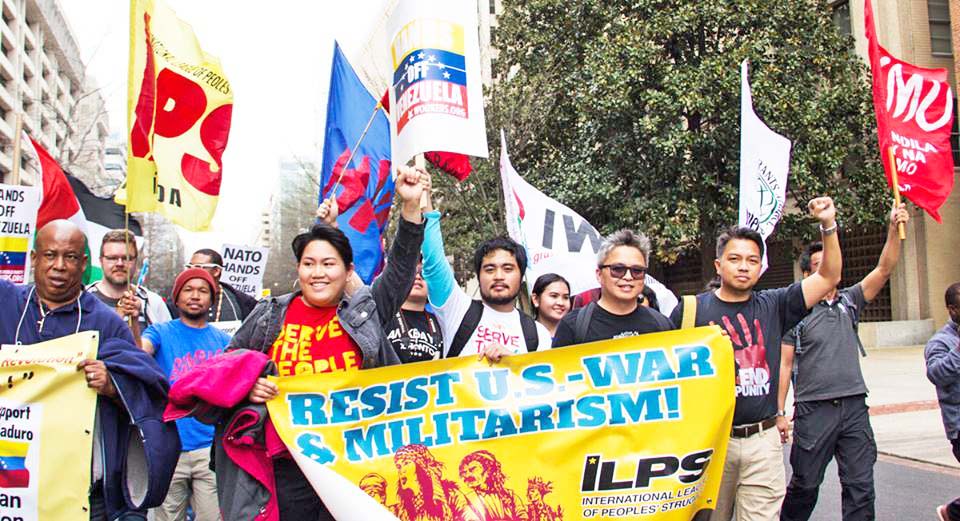 Greetings of solidarity from the Philippines, a former colony of the United States. But more importantly, a nation which resisted colonizers and ousted dictators through revolution and people power uprisings.

Today, [14] farmers were killed in a joint police-military operation in Negros, an island province in the Philippines

Martial law is still enforced in the whole southern island of Mindanao.

The bloody drug war has claimed the lives of more than 20,000 people.

Rodrigo Duterte, yes, is responsible for this carnage. He should be made to account. And we are thankful for many groups today, especially U.S. and Filipino-American citizens, who have condemned the deterioration of the human rights situation in the Philippines.

But there’s another monster we have to name, which is enabling mad butchers like Duterte. This is the US-led war machine deployed in the Asia-Pacific region. The pivot to Asia meant more funds are used to support governments, even repressive governments, that allow the basing of US troops, US arms, military drones, and other war materiel.

We ask the following:

Why, despite the drug war bloodbath, did the US continue its military exercises with the Duterte government?

Why are American taxes being used to support the Philippine military’s all-out war against farmers demanding land reform, indigenous peoples resisting the entry of mining and logging, and suspected sympathizers of communist groups?

Our response is this:

We oppose China’s illegal expansion in the South China Sea. We condemn its encroachment on our maritime territories.

But at the same time, learning from our colonial experience, we reject the continued US military basing in the Philippines.

We endured a century of humiliating wanton plunder of our resources, the rape of our women, the violation of our sovereignty. The US military-led behemoth has brought nothing but poverty, misery, endless violence, and abuse of our rights.

So we say enough. Stop funding wars in the Philippines. Stop sending troops and weapons of destruction. Stop the desecration of our lands. Stop this government from using American taxes to support Duterte’s drug war, martial law, and its all-out war against the Filipino people.

I travelled more than 8,500 miles from Manila to Washington DC to deliver this message. A message of anger and frustration over decades of military intervention in our land. But I will bring home inspiring testimonies and messages of hope based from what I witnessed today. I will share with our people your powerful solidarity to the Filipino people’s struggle for real freedom, democracy and just peace. That even here in the US, there is a strong and vibrant movement challenging the US war empire.  That despite our distance, we are united in our common stand to oppose NATO, the US-led war machine, and the use of imperialist wars to subjugate the resistance of the people.

From Washington DC to Manila, from Bayan to Resist, the anti-war campaign of the International League of People’s Struggle, we proudly proclaim: No to NATO, no to the deployment of war regimes, no to racism and no to the meddling of domestic affairs of sovereign nations.