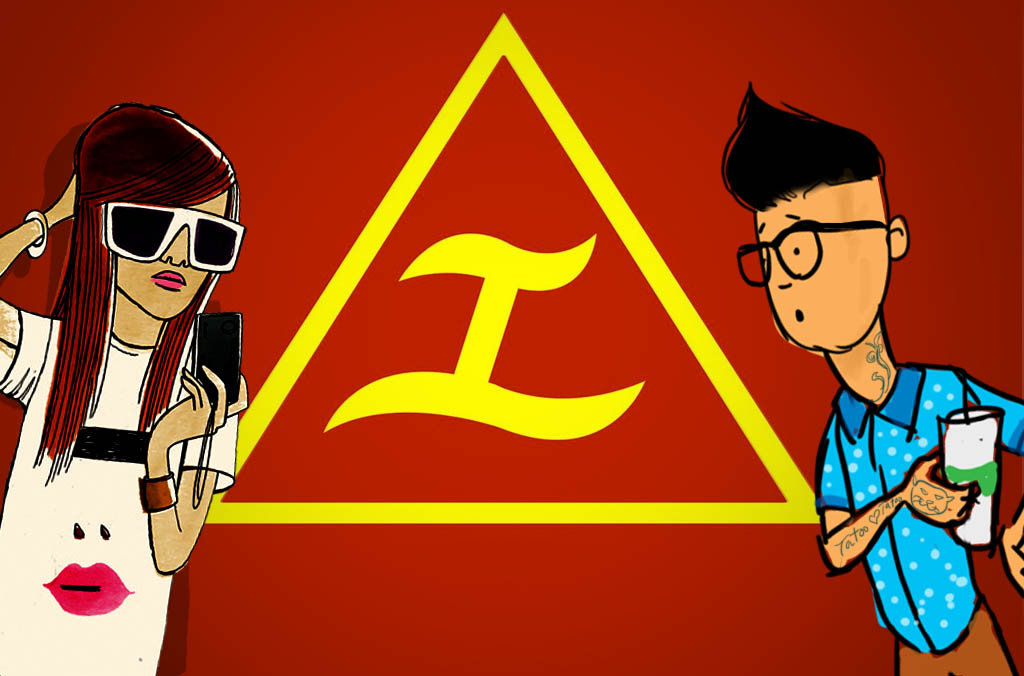 Aside from Joma Sison and the surviving participants of the First Quarter Storm era, no one has come forward to publicly admit that he or she is the leader of the Kabataang Makabayan or KM. There is no roster of KM officers, there are no KM chapters recognized by schools, there are no KM members on Facebook.

Yet KM recently celebrated its 50th founding year. Some of its members staged lightning rallies in Manila, some chapters released an anniversary statement, and some former activists from the 1980s and 1990s gave testimonies about the influence of KM on their lives.

KM is not the oldest existing youth group in the Philippines but its radical contribution and impact to the country’s politics remains unsurpassed. Traditional youth networks focus on individual achievements (e.g. how many of their members became part of Congress or Cabinet) while KM is more concerned on how to mobilize its members in the national democratic struggle. There are no KM greats, no KM heroes, no prominent alumni – everyone is simply KM.
What makes KM relevant in 2015? Aside from the fact that it continues to exist, its political program has remained revolutionary. There are avant-garde political groups but KM is unabashedly revolutionary. It introduced a comprehensive and progressive concept of youth organizing and youth involvement in politics.

” …the KM perspective continues to represent a new type of politics. It is not because KM has stubbornly refused to embrace change, but because the general conditions of the present have remained unchanged since the 1960s… “

KM reminded the youth that there is more to politics than electoral politics. That its task is to name the ills of society, explain the roots of the crisis, join the people’s struggle, and carry out the socialist alternative. What a subversive idea in 1964! Compared to the mainstream values and political thinking today, the KM perspective continues to represent a new type of politics. It is not because KM has stubbornly refused to embrace change, but because the general conditions of the present have remained unchanged since the 1960s. We should add that the conservative ruling class has ruthlessly demonized the KM way of doing politics as irrational, futile, and terroristic.

KM is many things to different people but at least it has a sense of history. It was founded on November 30, Bonifacio Day, to herald the continuity of the 1896 Philippine Revolution. Some have derided the KM for copying the so-called destructive politics of China’s Red Guards. But China’s Cultural Revolution was launched in 1966 while KM was founded two years earlier. It is true that KM members have consistently propagated the teachings of Mao Zedong but they saw themselves from the very beginning as heirs of the Katipunan legacy. The KM is both Katipunero and Red Guard.

“Even before martial law was declared, KM members were encouraged to serve the people, integrate with the masses in the countryside, and join the agrarian revolution”

Some looked down on KM leaders who became the pioneer cadres of the Communist Party and New People’s Army. But the CPP-NPA was the core of the resistance movement during martial law in the 1970s. The KM was also one of the underground groups which established the National Democratic Front. In a different context, KM was the original proponent of the government’s ‘balik-probinsiya’ (back to the province) program. Even before martial law was declared, KM members were encouraged to serve the people, integrate with the masses in the countryside, and join the agrarian revolution. Many tirelessly worked to create grassroots formations across the archipelago. Most of these initiatives became leading NGOs and people’s organizations that promoted the welfare of the poor and marginalized. There is probably a KM member behind every anti-Marcos NGO that bloomed in the 1970s and 1980s.

Anti-communists can ignore the preceding paragraph but the KM will remain a remarkable political group. No serious student of Philippine politics and history can disregard KM and the “discontents” it caused in semi-feudal and semi-colonial Philippines. No youth group can claim to discover a more radical way of changing the world without first debunking the political legacy of KM.

Highlights of the stage production “Kabataang Makabayan, Paglingkuran ang Sambayanan” (Patriotic Youth, Serve the People) in celebration of the 50th anniversary of KM

The problem with KM is that it set a very high standard for young people who wanted to take part in politics. Before KM, young people were told to do charity or to campaign for good-hearted politicians. Nothing wrong with these prescriptions but KM argued that young people are capable of doing greater things for the country and more meaningful actions for the poor such as fighting landlordism, foreign meddling, and systemic corruption in government. Before KM, young people were able to articulate these issues in the government by joining elite-controlled parties or serving at the pleasure of dynasties. But after KM, the youth were able to speak out and assert their rights through various collective actions.

Suddenly, the political practice of the reactionary elite appeared shallow, self-serving, and anti-democratic. KM put to shame the burgis (bourgeois) model of youth leadership.
After KM, young leaders wanting fame, wealth, and privilege in the bureaucracy were mocked. Youth power was redefined by linking it with the merger of youthful idealism and the struggle of the working classes. Or in other words, youth power is realized when young people are immersed in the people’s movement. Youth leadership is not about highly motivated young people assuming key positions in corporate and political institutions, but serving the people in the grassroots.

“It was KM which forcefully emphasized that a youth movement obsessed with prettifying the useless bits of reforms introduced by the reactionary state is complicit in preserving the unequal present.”

After KM, it is already laughable and pathetic for young people to beg for crumbs from their elders in the pork-controlled bureaucracy. Why ask for piecemeal reforms when the youth can link arms with the oppressed, bring down the repressive state, and build a more equal society? It was KM which forcefully emphasized that a youth movement obsessed with prettifying the useless bits of reforms introduced by the reactionary state is complicit in preserving the unequal present.
KM rallied the youth to reject the unjust status quo by enjoining them to pursue the path of revolution. The message of KM appealed to many who sincerely hoped for change but were disappointed by the dull choices offered by mainstream politics. The youth wanted more from politics, they were willing to sacrifice more for the country, but politicians only wanted them to vote and support the government. No wonder many students from varied backgrounds became KM members.
The Marcos government saw the phenomenal growth of KM as a threat to the political order. It acknowledged the right of the youth to dissent but only if it would lead to the strengthening of the state. It accused the KM of being a misguided group of youngsters fomenting anti-social activities. To entice the youth away from KM, it formed the Kabataang Barangay or KB.
KM radicalism was shunned in favor of Marcos-approved activism. The youth can join politics at the village level but only if it’s restricted to the activities of KB. This Marcosian ploy was intended to restore the support of the youth and diminish the growing grassroots strength of the KM. It was a bold and costly political experiment that distorted and corrupted the democratic demand of the KM for greater youth involvement or participation in politics. Nevertheless, it lasted for more than four decades. Marcos was ousted in 1986 but the KB was resurrected as Sangguniang Kabataan or SK. The name was changed but its purpose remained the same: Discourage the youth from advancing the politics of revolution by giving them a token role in the bureaucracy.
But over the years, the SK merely became an embarrassing appendage of patronage politics. In 2013, the SK was finally abolished so that bureaucrats can allegedly fix it. Curiously, nobody mourned the death of KB and the SK. KM was once again vindicated. And even more crucial, a dose of KM radicalism is urgently needed to energize the debates regarding SK. How can they fix the SK if the whole political enterprise is moribund? Fix the system and then we can talk of political innovation. And to fix the system, no less than a revolution is required. We are back to KM and the revolution it espoused in 1964.

However, the reformist outlook and practice that dominated the politics of KB and SK still lingers. This is evident in the pronouncements of young trapos, government-backed youth parties, and conservative civic groups. How they clamor for youth representation in all working committees of the state (as if it is the central aim of politics), how they masterfully mimic the idiotic and deceptive language of their elder trapos, how they exaggerate symbolic gestures as great acts of politics, how they pitifully cling to the perks and trappings of the bureaucracy, how they uncritically support the reactionaries in waging war against the progressives, how they peddle illusory hope when the situation demands the overhaul of the beastly machine.

Fortunately, the KM still exists and continues to offer a bright and radical alternative. The red flag is still up which inspires many youth activists to persevere in the struggle. It is difficult to faithfully follow the political model introduced by KM but it is comforting to know that the ideal standard is workable as practiced by the revolutionary members of KM. For those carrying the flags of the mass movement in the urban, the politics of KM is both a lesson and guide on how to resist the corrosive legacy of excessive individualism, reformism, legalism, and even parliamentarism.
Not all youth groups can openly advocate armed struggle in the country but they can benefit from the continuing revolutionary legacy of KM. They can anchor their political aims on some of the programs proposed by KM.

No other youth group has done what KM achieved in the past half century. KM thrived as a legal mass organization for only eight years, and subsequently as an underground group in the past four decades. It survived the dictatorship and the attacks of succeeding regimes. It remained relevant because its cause is the national democratic struggle. What can be more correct than spreading the message of the revolution as the ultimate solution?

Photo below by Tudla Productions