Home NEWS We also bury in history the lie that Marcos is a hero... 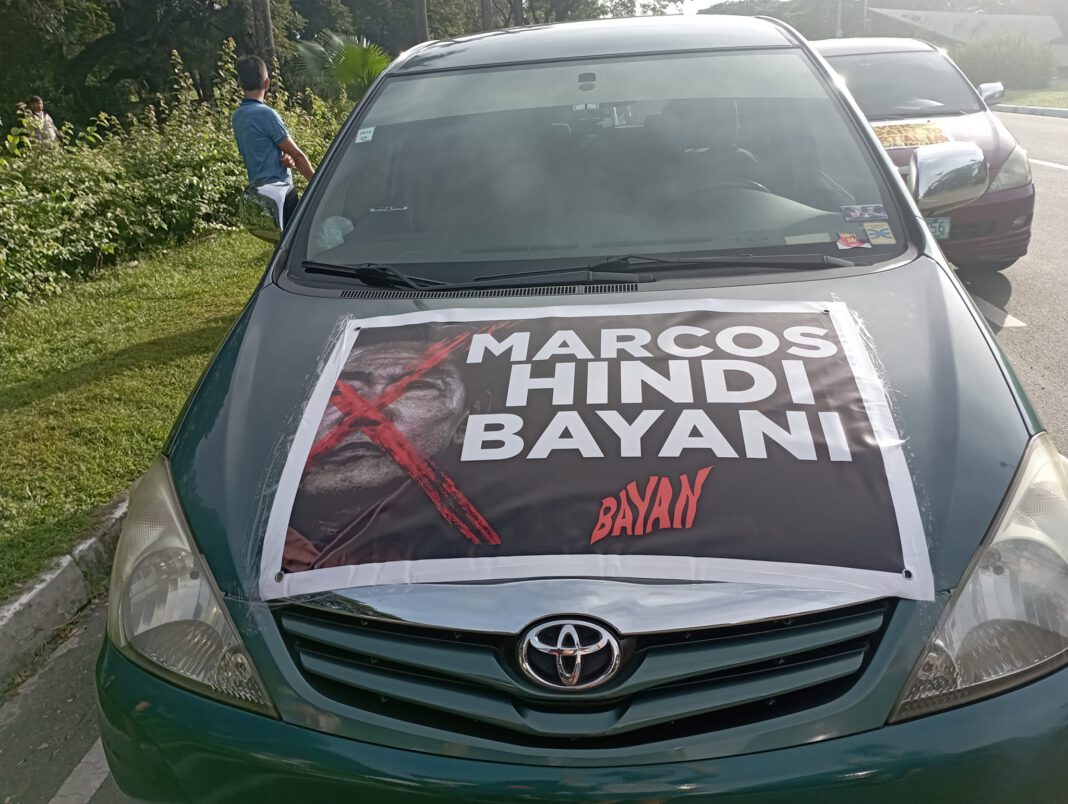 Progressive groups, human rights defenders, and martial law veterans held a caravan protest from UP Diliman going to the Libingan ng Mga Bayani (LNMB) to express their anger and disgust following the fifth anniversary of the burial of the late dictator Ferdinand Marcos at the LNMB on November 18.

[​​We are here today not only to oppose the burial of Marcos in the Libingan ng Mga Bayani, but we are also here to make sure that we also bury in history the lie that Marcos is a hero.]

Five years ago, the late dictator was sneaked into LNMB taunted as if being a thief in the night. He arrived via chopper–with a Philippine flag on his casket, military honors, and a 21-gun salute–-an indication that he was finally given a hero’s burial.

The burial was kept secret, even to the media, until the casket was already being transported to LNMB.

Golden Age for the Marcoses

“Marcos is no hero. Not an inch of heroism runs in the veins of a deposed tyrant who plundered the nation by the billions and amassed wealth from the nation’s coffers. Billions of pesos remain unrecovered up to the present — burying Filipinos deep in debt and in poverty for generations to come. There is nothing heroic in plunging the country into landlessness and unemployment, which worsened throughout the Marcos dictatorship and stirred great social unrest.” Cristina Palabay, secretary-general of Karapatan, asserted.

According to human rights groups, the so-called golden age happened in the past, but only the Marcoses inherited such a golden age during the regime of the late dictator.

Adding to this economic toll were rampant human rights violations and harassment ballooned to 70,000 people imprisoned, 34,000 tortured, and 3,240 killed as per Amnesty International.

Meanwhile, it was only recently when martial law victims and survivors have been compensated from the swiss bank accounts of Marcos which were recovered by the government.

Ilocos Norte is the hometown of the Marcoses believed to have fully gained the trust and the electoral support of the residents all over the north, thus calling it “Solid North.”

Recalling the 2016 elections, Bongbong Marcos got massive support in the Solid North, including the Cordillera Administrative Region (CAR) and the Cagayan Valley.

[Let us not allow our dignity as Ilocanos, as Igorot, as indigenous people to be tarnished]

Galimba added there were recorded murder cases on three indigenous people from Vintar and eight farmers in Dumalneg in Ilocos during the dictator’s reign of terror.

“Today, we come together once again to loudly proclaim that Marcos is not a hero. A dictator who plunged the nation into debt, human rights violations, and dictatorship will never be a hero — and with this diabolical tandem Marcos-Duterte tandem in the 2022 elections, we can only expect more of their lies glorifying the atrocious regimes of their fathers and continuing their legacies of tyranny and undemocratic rule,” said CARMMA convenor Prof. Judy Taguiwalo.

The Marcos-Duterte tandem was officially announced when Sara Duterte, daughter of President Rodrigo Duterte, backed out her candidacy for mayor in Davao then substituted for the candidacy for vice president.

For the martial survivors and progressive groups, another Marcos and Duterte in power either fall to a threat of another martial law to happen or that historical distortion may succeed and thus continue to spread lies and misinformation about Martial Law.