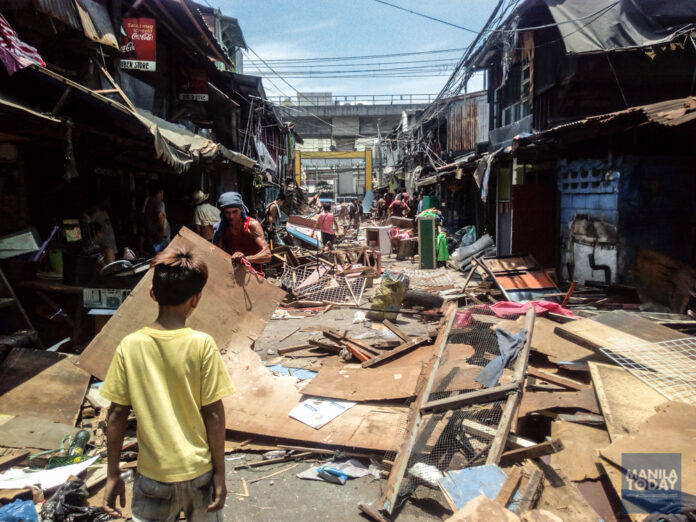 “We have no place to go,” said Nhadz Ampaso, a young mother and resident of Calaanan compound, Caloocan City.

Her home is amongst the estimated 100 homes demolished on May 26 at Barangay 86. Ampaso gave birth to her baby a week before the demolition.

“The government did not offer any relocation. No government official talked to us ever since our homes were destroyed,” added Ampaso.

The young mother is amongst hundreds others rendered homeless as demolition crew destroyed structures within the 6,000 square-meter compound. An estimated total of 500 families were affected by the demolition.

At around 8 o’clock in the morning, hundreds of demolition personnel attempted to enter the premises. They were accompanied by around 400 policemen gathered nearby the compound. Water cannons by the local Bureau of Fire Protection were also used against the residents.

Violence ensued as policemen and demolition crew entered the compound, prompting residents to resist the impending demolition. Rocks were thrown, and minutes later, PO1 Virgilio M. Cabangis sustained a gunshot wound on the upper left leg, believed to have been caused by an improvised weapon known as ‘sumpak’.

Cabangis, along with PO1 Joseph Alalag were rushed to nearby MCU hospital for treatment. Alalag sustained minor lacerations to the body.

SWAT troopers were then ordered to the compound, brandishing high-powered rifles and shotguns.

Four individuals were arrested in the aftermath: Edwin Santos, 38, Junel Orlanda, 24, Jomel Napao, 25, Edson Napao, 16 and Edward Williams, 27. Williams was arrested for drug charges. All are residents of Barangay 86.

Weeks prior the demolition, a waiver amounting to P60,000 pesos was offered by SMI Development Corporation and private claimants Ramon and Natividad Nisce in exchange for residents’ surrender to any claim to the land.

Edgar Ricio shook his head in disbelief as his home was being tore down.

“I did not accept their settlement offer,” said Ricio. A jeepney driver and father of six, he lived in Calaanan compound for 15 years.

“They said that if they did not accept the offer, our homes would not be demolished. Now I have no idea where to put my family,” Ricio lamented.

According to village councilor Francis Tio, only 50 homes were scheduled to be demolished.

“What they did was illegal. The court order issued by Regional Trial Court Branch 128 does not include structures that were demolished today. There are still cases pending in other courts regarding the issue of land ownership,” he added.

“A month ago, in a meeting we had with Congressman Erice at the University of Caloocan City, he assured us that proper relocation will be given to those homes demolished along the road,” said Lerma Tularan, resident of Barangay 86.

“He also assured us that only those who accepted the settlement offer will be demolished,” she further noted.

Caloocan City Representative Edgar Erice is a known ally of President Aquino, both belong to the ruling Liberal Party.

Sleeping in the streets

After the demolition, the residents had nowhere to go and were forced to sleep in the streets with the belongings.

As of May 27, homeless residents of Barangay 86 at the outskirts of Calaanan compound were told by Department of Public Safety and Traffic Management-Caloocan to vacate the premises by 12 noon despite having no relocation site or temporary shelter offered by government.