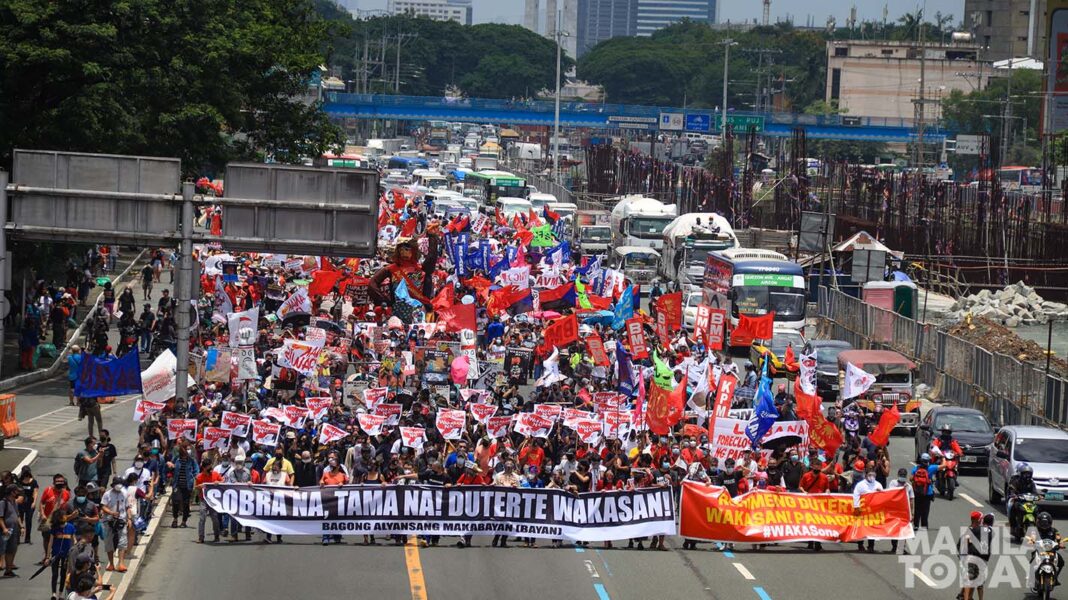 Progressive groups avowed “enough is enough” in the protest held on the State of the Nation Address (SONA) of President Rodrigo Duterte this year. They said the only good thing about the sixth and final SONA by Duterte is that this is his last one.

Protesters revisited Duterte’s promises mostly unfulfilled in their books and most contentious statements still reviled to this day.

What was instead eradicated was tens of thousands of lives in the bloody war on drugs, while the illegal drugs scourge in the country continues. Justice has yet to be meted out for the drug war killings—for the individual deaths and for the policy, as the International Criminal Court probe resumes and the challenge in the Supreme Court (SC) still awaits a decision.

Despite the bill for ending endo (end of contract or the practice of hiring workers below six months of tenure to avoid regularization and its accompanying benefits) passing through Congress, protesters assailed how Duterte vetoed his own campaign promise in favor of big business interests and concerns.

Protesters also called out Duterte on his ‘independent foreign policy’ boasts that to them practically only meant kowtowing to more foreign powers such as China, and no longer just the United States.

The resumption of the peace talks was short-lived and soon after Duterte’s cancellation of the talks, the rampage of human rights violations against members of people’s organizations and against government critics replaced the drug war killings in the headlines.

Political extrajudicial killings number to 414 as of June 2021, including those killed in the 25 massacres under Duterte, according to rights group Karapatan.

Meanwhile, 489 out of 715 political prisoners in the country were arrested under Duterte on various ‘trumped-up’ charges, usually non-bailable offenses that keep them in jail for years. Among them 132 are women, 92 are sickly and 64 are elderly. The prisoners of conscience—imprisoned for their political activities, their affiliation, or beliefs but usually slapped with common crimes—are languishing in the overcrowded jails in the country during the COVID-19 pandemic.

Karapatan also recorded 497 victims of illegal arrest and detention and 223 victims of torture.

The counterinsurgency campaigns carried out by state forces in the provinces represent most of where the human rights violations arose. In media and social media, the National Task Force to End Local Communist and Armed Conflict (NTF-ELCAC) spokespersons went on a red-tagging spree and intelligence forces went about tagging those part of a destabilization plot—including not only activists but also journalists, entertainment celebrities, the new and first Olympic Gold medalist, media networks, etc. Basically anybody who has issued so much as a cry for help that puts the government in a bad light has been labeled a foe, and they are then at risk of targeted attacks online or in real life.

The strongman image and policies of Duterte such as martial law was compared to the late dictator Ferdinand Marcos, Sr. But protesters averred that the Duterte administration is even more brutal, merciless, and bloody.

The enactment of the Anti-Terrorism Law of 2020—seen by many as a wholesale violation of constitutional rights—would make Duterte’s wishes to ignore human rights easier. There were 37 petitions filed against the law in the SC that now await a decision.

True to form, Duterte’s COVID-19 pandemic response was militaristic and punishing, but lacking medical solutions and aid for the people. A small fraction of the population and even among the poor were given only two months of P5,000 to P8,000 aid (less than the very low minimum wage in the country) in the 16 months that the country has been in differing iterations of the lockdown or community quarantine.

Protesters deemed it was only necessary to hold Duterte accountable for the 27,000 COVID-19 death toll in the country, owing to his ‘criminal neglect.’

Clad in colorful garb and creative placards, thousands of protesters braved altering rain and extreme heat after a week of heavy rains in anticipation of this day.

Human rights defenders, peasants, youth, workers, urban poor, women, indigenous peoples (IP), media, LGBT, health, teachers, church, lawyers, jeepney drivers trooped to the University of the Philippines (UP) on the morning of July 26. Duterte was set to deliver an appraisal of his administration’s achievements in the afternoon at the House of Representatives.

This was the second time since the global pandemic that the SONA rally took place at University Avenue in UP Diliman.

After the rally program concluded, the protesters proceeded to a unity march along Commonwealth Avenue and inched nearer to Duterte’s platform that day and the traditional pre-pandemic SONA protest venue.

A commotion between protesters and Quezon City cops transpired when police barricaded the thoroughfare and made protesters squeeze into two lanes of the road.

Bagong Alyansang Makabayan secretary-general Renato Reyes asserted that the protesters could not fit in two small lanes. He also said the blockade by the police was in violation of the groups’ agreement with the local government in observance of the SONA protest.

It took about an hour before the police backed down and protesters continued their march to Tandang Sora Avenue.