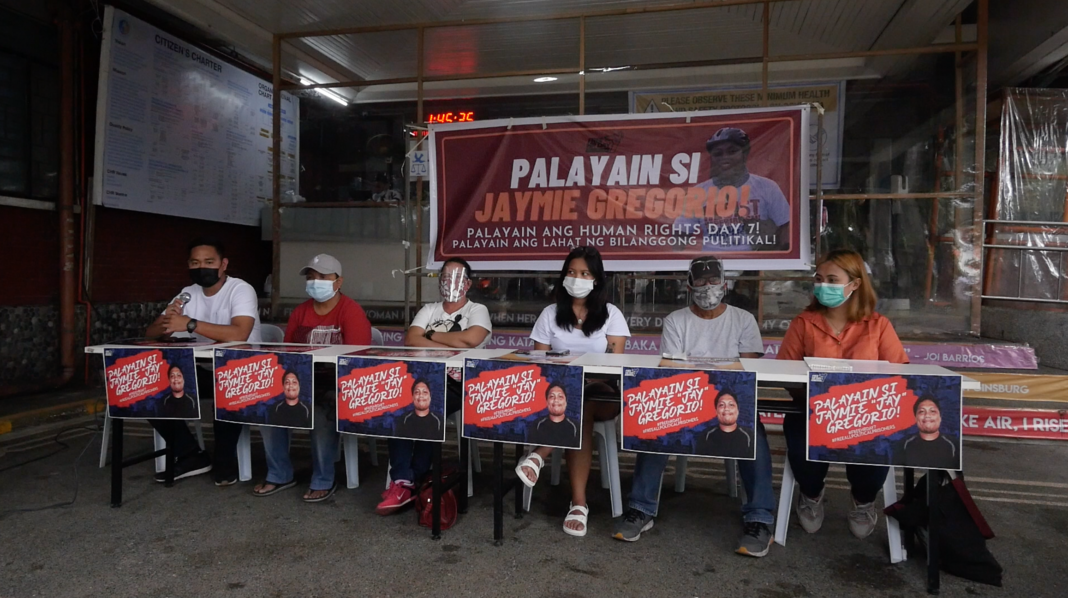 Gregorio emphasized that the arrest of #HRD7 is only but an inept and inutile act to propagate state fascism and militarization under the Duterte administration.

Who is Jaymie Gregorio Jr.?

Jaymie Gregorio is a student-leader activist who took up a degree in Fine Arts in Eulogio Amang Rodriguez Institute of Science and Technology (EARIST). He then became a member of PUP chapter organizations of Student Christian Movement of the Philippines and Anakbayan in 2008.

Given the skills Gregorio exemplifies, he later joined the cultural organization UgatLAHI EARIST. The said organization is collective group of artists, and cultural workers sharing the same interest to serve the people.

Gregorio is known as a diligent and proactive student-leader who served not only for the students’ democratic rights but also for the youth and community at large.

From then on, his eagerness to further assert the campaigns and demands of studentry progressed as he became one of the founding members of EARIST political party KAMAO – Katipunan ng Mag-aaral at Organisasyon. As a matter of fact, KAMAO won the student council election with Gregorio alongside his co-activists in EARIST at the helm. They collectively fought for the inclusive, free, and quality education; and quashed the questionable development fees under school matriculation in the university.

In 2011, he then became a youth organizer of Anakbayan Metro Manila which helped him bind alliances among other progressive groups within the university belt to drumbeat various student demands such as budget cuts in universities among others. In 2015, through his remarkable leadership, he was elected as the secretary general of Anakbayan Metro Manila.

In 2016, Gregorio became the electoral campaign coordinator for Kabataan Partylist and showcased his overall support for the only partylist for the youth in the Congress. In there, he landed on various schools and communities to campaign and made educational discussions.

In 2017, he then focused to lead and organize labor workers in pier and its residing communities through Kilusang Mayo Uno Metro Manila. Among many labor issues, Gregorio actively campaigned for workers to protest their right to wages, safe labor, and abolish contractualization. Furthermore, he has also integrated with the residents of Smokey Mountain and helped organizing the community alongside the labor workers to resist the TRAIN law last 2018.

Currently, he is a regional council member of KMU Metro Manila and has been actively asserting for labor rights and workers disputes in Harbour Centre, Unipak Sardines, among others.

On January 9, families, colleagues, and supporters launched in a press conference the Free Jaymie Gregorio Network at the Commission on Human Rights in Quezon City. They further urged the immediate release of Gregorio along with the #HRD7 and all political prisoners in the Philippines.

Norinda Nacinopa is the president of Samahan ng Slord Development Corporation, a manufacturing corporation of canned goods like Unipak Sardines in the Philippines.

According to Nacinopa, she first met Gregorio under the Manila Workers Unity (MAWU) who was organizing labor workers.

Nacinopa also lambasted the PNP-CIDG allegations against Gregorio, citing that he has only been organizing labor rights groups.

In the written statement of Gregorio, he emphasized that their arrest is among the countless manifestations enough to continue the struggle on the interest of the people. He added that emotions filled with anger and tears must transform to strengthen and deepen the stance for arousing, mobilizing, and organizing in communities, factories, schools, and rural lands.