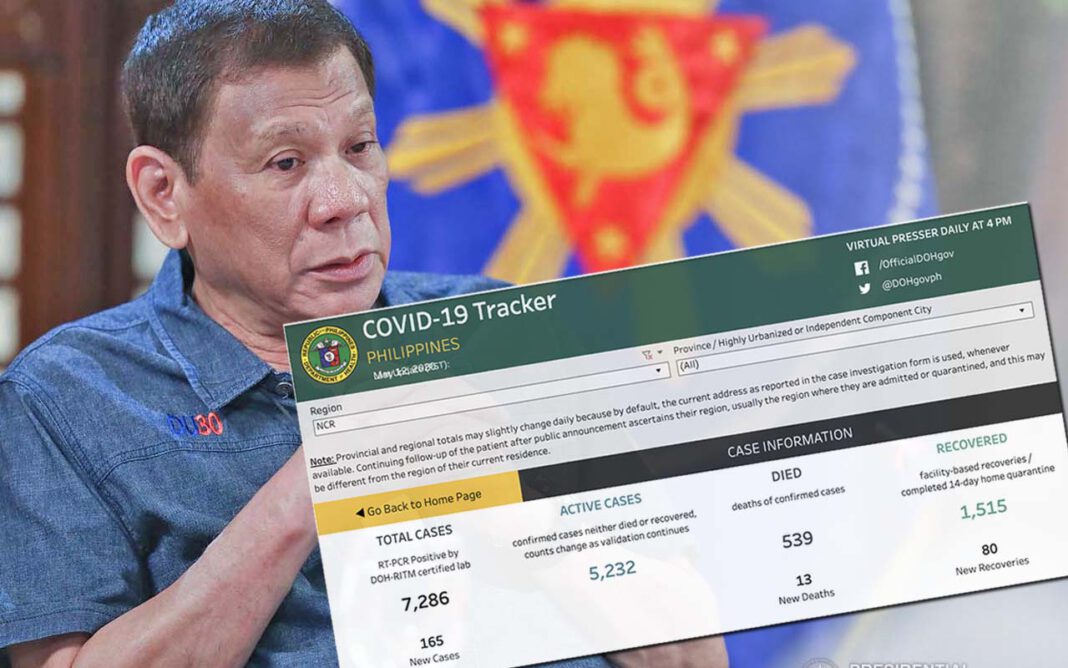 The National Capital Region (NCR) of the Philippines, thought to be the epicenter of the COVID-19 outbreak in the Philippines, is set to exceed the length of the lockdown in Wuhan, where the novel coronavirus and coronavirus disease were discovered towards the end of December 2019.

Government has been reluctant to lift the lockdown in NCR as cases continue to rise.

But confirmed cases and deaths continue to rise, despite DOH readings that “flattening the curve” has started. So when can government be confident about lifting the lockdown?

The lockdown was seen by the Philippine government as instrumental to slowing down cases of COVID-19 to achieve “flattening the curve.”  However, studies worldwide showed that social distancing and isolation can already contribute to slowing down an outbreak.

Some governments around the world imposed varying degrees of lockdowns after exhausting medical interventions such as mass testing and finding out the spread needed varying modes of quarantine to contain the spread of the disease. Some governments imposed the lockdown to slow down the cases knowing their health systems are not capable of facing the pandemic–and this appears to be what’s true for the Philippines. The country only has around 52 cases, 3 deaths and 1,000 tests in six weeks that the first cases was reported and when the first lockdown was imposed in NCR. Now, cases reached 11,350 and deaths numbered to 751 and has reported to have tested 158,000 or less than 0.1% of the country’s population.

The imposed lockdown in the Philippines was implemented militarily and saw little, delayed or no food or financial aid for Filipinos of different economic standing, yet still no mass testing by May 12 and ineffectual tracing and isolation.

The lockdown saw more than 100,000 troops deployed in checkpoints in boundaries between cities or regions. Only one per household is allowed to go out. In the NCR, this means at least 3,000,000 people still going out during in a region of 3,000,000 families–to buy their own food as food aid from government did not assure three meals per day or no hunger at all. Health workers, food manufacturers, groceries and other services and industries deemed essential stayed open, as did many business process outsourcing companies. So aside from the 1 per family, many are still allowed to go out in an economy dependent on export production, foreign investments and services.

Some reported receiving one food pack a week that can last a few days, some once in two weeks while some had none. Those who received none were mostly the middle class, those not living in the most depressed areas, but may also be staggering from the loss of work and income during the work stoppage period. This depends on the capacity of the local government units (LGUs) as this concern arising from the lockdown imposed by the national government was relegated to the LGU “as a matter of responsibility.”

After almost two months, distribution is still yet to be completed of an exiguous P5,000 to P8,000 financial aid. The aid is given to a selective number of families (only 18 million of the 26 million total as per government estimates) due to a quota system of around 40% to 60% at the city or province level (but only around 20% at the most basic unit of the barangay), with a budget of P200 million. The minimum wage in the Philippines is about P10,000 to P12,000 a month and even that is already too low, seen to be only half of the living allowance a family needs. Other government agencies also offered one-time cash aid to a number less than half their total stakeholders and yet to complete distribution as well. Duterte said on May 12 we would not have money for aid for long, especially if the country will experience a second wave of infections. The aid for the second month of the lockdown has not been distributed and the lockdown extended anew.

Mass testing is yet to happen and other medical interventions remain lacking after almost two months of lockdown and more than three months since the first COVID-19 case.cDOH reported that it finally hit its 8,000 per day testing capacity yesterday, 10 days later than scheduled. Testing lab targets this month at 70+ to achieve the 20,000 per day testing capacity by May 15 and 30,000 by May 30, according to Presidential Spokesperson Harry Roque. But there are now only 28 labs in the country, reported by DOH today.

Identification of source and clusters of transmission and breaking chain of transmission has yet to be done as contact training and isolation procedures are lacking. Of the 8,493 active COVID-19 cases, DOH reported only 1,550 (18%) were confirmed admitted to hospitals while 6,402 reported as “pending admission status” and 241 are home quarantined.

Some local government units passed strict “stay at home” or “24-hour curfew” (that meant aside from the one authorized person per family cannot even be outside their front door) ordinances with accompanying detention and fines for those arrested. Fines higher than the government aid or equal to weeks of minimum wage. The police reported more than 100,000 were arrested for curfew or quarantine violations, and among that number more than 17,000 detained in the Philippine jails that reported 394% congestion rate in 2019.

More than 40 were arrested under the “fake news” provision that was passed in the law that gave the president additional powers in late March. There is no legal definition of “fake news” in the country and so the law enforcement authorities became the sole arbiter of fake news. Some of these posts were critical of the government, not necessarily disinformation or misinformation, including a post questioning an arms deal the government received during this time (but bought earlier) and a sarcastic post by artist Maria Victoria Beltran. She planned to countersue the mayor who threatened to arrest her (and she was arrested) and in one instance prevented her counsel to see her while he talked to her. She would be named one of 17 laureates of the 2020 Deutsche Welle Freedom of Speech Award around two weeks later.

Some relief volunteers were arrested, such as known activist farmers’ group Anakpawis despite having a pass from a government agency to conduct relief operations. They were arrested for “quarantine violations” or simply being out of their homes (as many others were charged with during this time), even after having agreed with the police who earlier apprehended them to let them proceed. Another activist youth group and their volunteers, 18 of them, holding a community kitchen in an informal settler community were arrested on May 1, Labor Day for supposedly “inciting against the government” on a known traditional protest day. They were brought and detained at a police camp that was placed under lockdown today after 14 cops tested positive for COVID-19.

ABS-CBN was also shut down during this period, after the network’s franchise extension legislations were not tackled by the Lower House of Congress after three years. The biggest broadcast network in the country and the Congress were promised a provisional authority to operate will be given to the network, especially as Congress was scheduled to adjourn from March 14 to May 4 and the lockdown that started on May 15 promised to delay tackling the franchise extension further. The government telecoms regulatory agency went back on its word and instead issued the network a cease and desist order and caused it to go off air on May 5, before 8pm–the first time it did so after it was raided and forced closed during Martial Law.

Due these incidents, the lockdown was seen by some as simply part of the government’s knack for a military solution even to a public health crisis. These were also seen to weaponize the law against free speech, against critics and anything that exposes the discrepancies of their response during this time.

NCR, as the country’s political and financial center and with its 16 cities and 1 municipality, has a population of 12.8 million in the 2015 Census. Before the lockdown, an estimated three million people living in nearby regions come to NCR daily to work.

NCR, among other areas in the country, has been under the longest lockdown that started on March 15 and was supposed to end in a month’s time. It was then called a community quarantine.

The whole Luzon island, the largest and most populous island in the Philippines with a population of more than 53 million by 2015, was included in the ECQ declaration by March 17. It was supposed to end on April 13, but extended up to the end of April.

The new classification of GCQ and MECQ announced today would be imposed from May 15 up to 31.

A triumph of medical measures, seeing decline of cases in Wuhan

Wuhan in Hubei, China implemented a lockdown from January 23 to April 8, lasting for 76 days. The industrial hub ported more than 50,000 infections. It also reported 2,500 deaths, which is 77% of all COVID-19 deaths in China.

The government built field hospitals to address the surge in cases and implemented other medical measures and by mid-March, new cases decreased and slowed down to a trickle, coming from the thousands per day in February. The president of China even visited Wuhan in early March.

So, as cases declined, gradual return of activity has been allowed even before the lockdown was lifted and travelers in out of Wuhan was allowed on April 8. By last week of March, public buses and underground trains resumed service and businesses and shops reopened.  More than 90% of large-scale factories and businesses have reopened days before the lockdown was lifted. Government-confirmed healthy people were allowed to go back to work, while many still fear a resurgence of cases.

Lifting of their lockdown meant a “full restart” of the city’s economic and social activities, while epidemic prevention and control measures such as social distancing and monitoring people’s health remain in place.

The national strategy is testing, screening and quarantine nationwide.

Second wave of infections are all too probable until a vaccine is found, even after “flattening the curve” or lifting the lockdown.

But the more important issue to address is how the government has raised the health system capacity to inch towards more recovered cases than active ones or until a day or days will soon come that there will be no new reported cases because medical measures were sufficient and have worked. The government reports more recovered cases than deaths, but that is somewhat expected given that COVID-19 is said to be not deadly, but highly contagious.

During the time of pandemic or lockdown or both, aggressive testing, tracing and treatment can be the only way to compensate to the lack of vaccine to tread towards eradication of the disease.

Difference between confirmed cases and those who tested positive breach 50,000