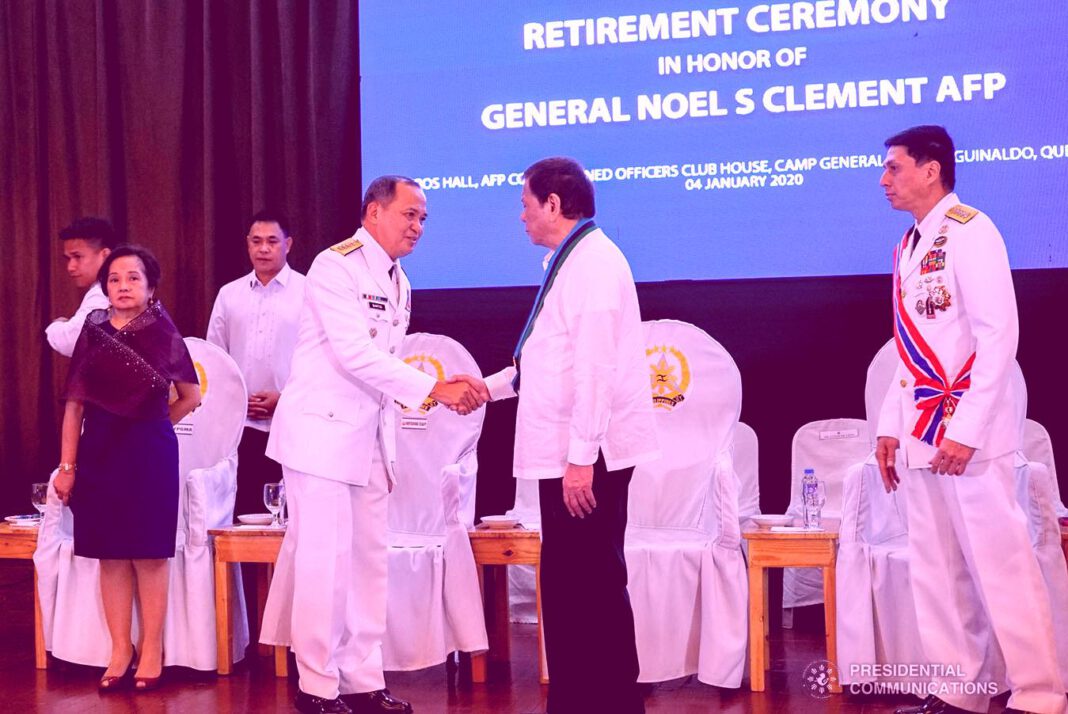 As we opened the new year, President Rodrigo Duterte chose the new Armed Forces of the Philippines (AFP) chief: Lieutenant General (Lt.Gen.) Felimon Santos Jr. He will replace General Noel Clement, who will retire on January 5, after serving just over 3 months as military chief.

For the fifth time under Duterte’s administration, the new AFP Chief-of-Staff is from the Eastern Mindanao Command (EastMinCom) based in Davao City, where Duterte served as mayor for 22 years.

Lt.Gen. Santos Jr. is the outgoing commander of the Armed Forces of the Philippines (AFP) Eastern Mindanao Command (EASTMINCOM) who was designated on January 21, 2019 in Davao City.

Lt.Gen. Santos Jr. had been involved in a “peace and security programs” of the Duterte government.  He was assigned to strategic military offices dealing with operations, intelligence, and civil military operations.

As an officer of the AFP Civil Relations Service and headed the Army’s former Civil Military Operations Group, he led in the implementation of Executive Order 70 which institutionalizes the “whole of nation approach” in fighting the revolutionaries in the country, but is aimed at a smokescreen for military rule, where military utilizes the bureaucracy to spy, surveil and control people’s actions in the guise of “peace and order” or “ending local communist armed conflict.”

Lt.Gen. Santos Jr. is one of the AFP officers accused by the Kilusang Magbubukid ng Pilipinas (KMP) to be responsible for the militarization of peasant communities.

Lt.Gen. Santos is among the commanding officers of the Philippine Army infantry battalions and brigades leading operations implementing the government counter-insurgency program using  “Community Organizing for Peace and Development, civil military operations, intelligence operations, psy-war operations, and other counterinsurgency operations that group claimed to be targeting farmers and civilians.”

Before serving the EASTMINCOM, he was assigned as Commander of 7th Infantry Division, Philippine Army based in Fort Ramon Magsaysay, Nueva Ecija.

He graduated from the Philippine Military Academy in 1986 and spent most of his junior years with the 39th Infantry Battalion, a unit deployed in various provinces in Mindanao. He once headed the 11th Intelligence Service Unit based in Davao City.

Santos’ is acclaimed as “seasoned combat officer”  because of his “awards which include Gold Cross Medals for gallantry in action, Bronze Cross Medals, Distinguished Service Stars, an Outstanding Achievement Medal, Military Merit Medals, Military Commendation Medals and numerous letters of commendations and appreciation from the military and civilian organizations.”

But to the KMP, the awards and stars on his sleeve are “equivalent to farmers and Lumad killed, tortured, unjustly arrested and detained, and subjected to various human rights violations.”

Statement: Let us not succumb to fear or surrender to lies