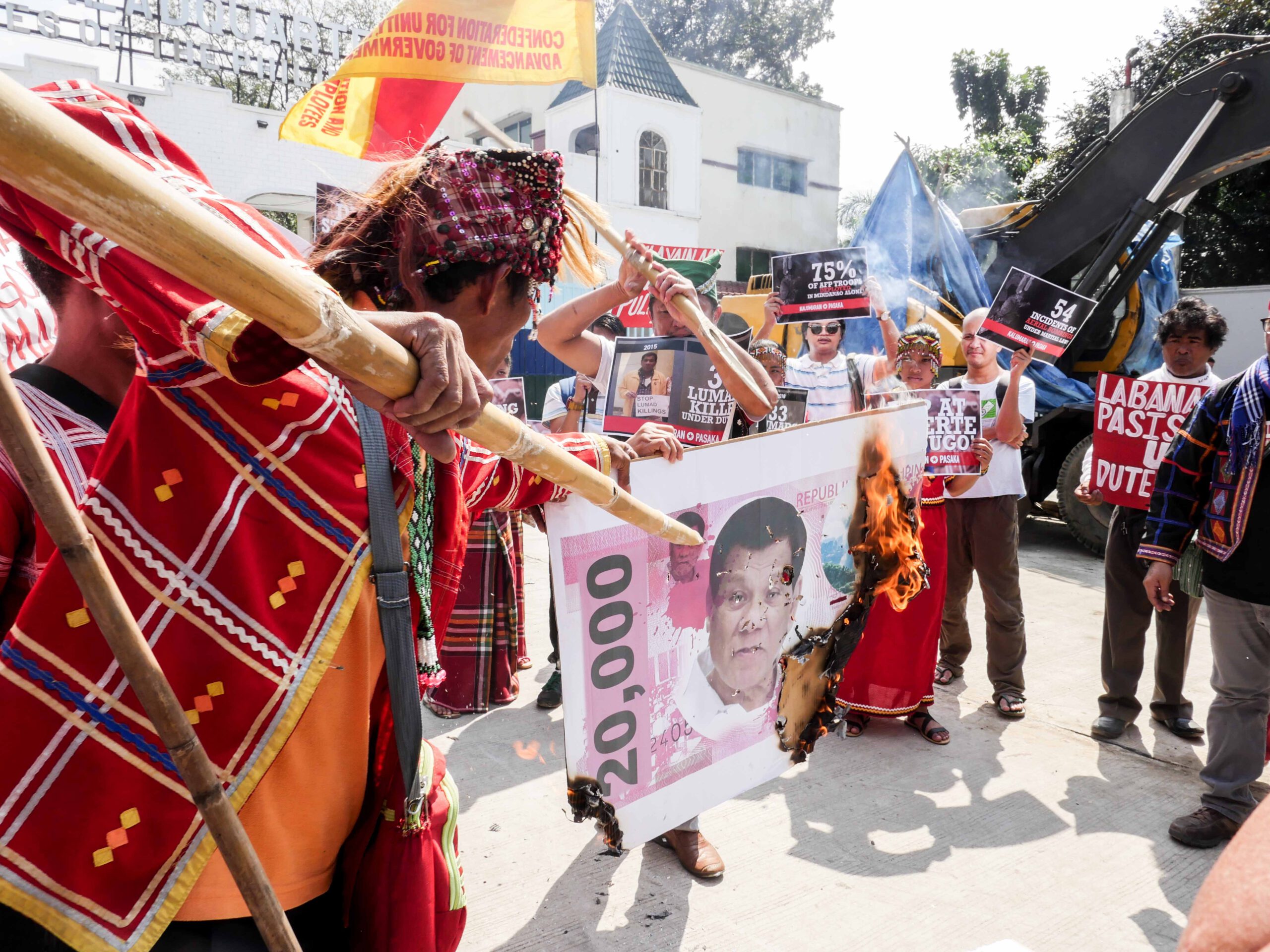 According to the group, martial law has resulted in massive abuses and gross human rights violations against indigenous peoples, farmers, civilians, and activists in the southern Philippines.

The protesters registered their indignation over the P20,000 ‘reward money’ being offered by President Duterte to Lumads in exchange for killing New People’s Army (NPA) fighters. They see the government’s move as a revival of late President Corazon Aquino’s ‘total war policy’ which unleashed Alsa Masa, Tadtads, Pulahans, and Itumans in a bloody witch-hunt against any suspected communist or sympathizer.

“We don’t need this blood money. This is a blatant display of disrespect to our tribes and an insult to our culture. What we need as Lumads is for Duterte’s military to leave our indigenous communities and ancestral domains and for him to end martial law in the whole of Mindanao,” Kalumaran secretary-general Dulphing Ogan said.

“Like the ‘war on terror’ and the counterinsurgency war, Duterte has sanctioned a rewards system for the military which has triggered a string of fake surrenderees and capture of fake ‘high ranking’ rebels to satisfy the generals’ bounty-hunting,” Ogan added.

Ogan continued, “Duterte is giving indigenous paramilitaries like the the Alamara, Black Fighters, Bocales Group, and Magahat a blanket license to kill. They will not be able to kill armed NPA guerillas for sure because the latter has the capacity to kill them as well.”

“Duterte copied the Arroyo regime’s use of force multipliers which later were used by warlords like the Ampatuans and became the army of perpetrators of the Maguindanao massacre,” Ogan noted.

According to Kalumaran, as of February 2018, 58 cases of frustrated killings and almost 60 victims of political killings were reported, including 33 Lumads since Duterte assumed office. The group also documented 89 cases of attacks on Lumad schools due to militarization. There have been 54 incidents of aerial bombardments that have affected 46 communities with almost 600,000 individuals.

The group also stressed that 126 political prisoners have been arrested under the Duterte government.

In addition, the group slammed Duterte for the massive deployment of military troops in Mindanao. To date, 75% of AFP combat troops are now deployed in Eastern and Western Mindanao. From 55 battalions in 2016, 64 military battalions are currently executing martial law in various provinces of Mindanao.

“Duterte has exponentially increased the culture of impunity in Mindanao under Martial Law. But a people that has seen the horrors of Martial Law under Marcos will never be cower. “We will resist and fight back and seek an end to this state fascism and Duterte’s dictatorship,” Ogan said.