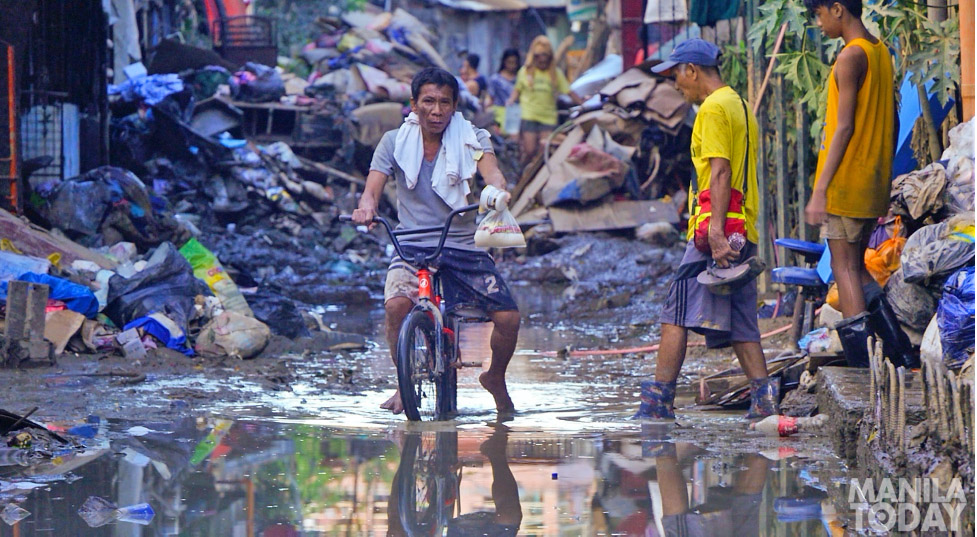 Global climate has undergone series of changes at least with the factors incorporated to the combination of natural phenomena and the effects of human activities leading to an absolute downfall as a repercussion—only that this is merely the beginning of climate crisis.

Case in point, communities in San Mateo and Rodriguez towns in the province of Rizal surmised how gloomy and dismal the weather condition, in all likelihood to their situation, in the aftermath of typhoon Ulysses.

That in particular was evident through the enormous blandness of skies along with the dust particles suspended in the air generating an obscure, sepia-toned atmosphere. Not to mention the swamped remnants of destroyed houses and belongings adding to the grim element.

Had not there been a single resident whose unaware beforehand regarding the brunt of typhoon Ulysses.

While they gave thanks to the text alerts coming from National Disaster and Risk Reduction Management Council (NDRRMC), they lamented as though they were not informed of the opening of the floodgates of Magat Dam reservoir that intensified the extent of flooding of which the residents likened typhoon Ulysses impact to typhoon Ondoy that brought heavy downpour and gust of wind last 2009.

Among the residents in creek side area along Phase 1, K2 at Kasiglahan Village in the town of Rodriguez, Rizal are those who have been relocated from particular areas in Quezon City since 2012.

Wading through debris of fallen houses submerged in thick mud, there lived Emily Ibay who said that it had been the second time her family experienced the severity of catastrophic typhoon with the sudden gush of flood waters measuring at the level of “lagpas tao” [beyond a person’s height] or above the roof.

More than 50 individuals, including Emily, crammed inside the two-story house of their neighbor who lived a few walks away from the riverside when heavy downpours went nonstop. At around 2:00 on November 12, the water was already waist-deep.

Emily once resided in the low-lying area of Kasiglahan Village referred as Anakpawis, recalling in dismay how the flood washed away all of what their family established until it happened again. From there, too, she experienced being stuck for more than 12 hours in the rooftop awaiting for rescue.

Her mother’s house was among the severely damaged with the roofs and walls made out of plywood have flown away. According to Emily, since they were situated in the periphery of the creek, their houses were like defense barricades except for it had not survived the waves because of inferior housing foundation.

The same goes with Amelia Jacque who had her son and two grandchildren sleeping during the wee hours when the flood waters harshly entered their house.

Amelia said that they have been receiving temporary alleviation like rice bags and noodles but these remained insufficient. Ration of water is also difficult for them as they have to pay for an essential good during crisis and despite the lack of money. In fact, his son put up to sold some scraps in order to earn money to which he gave Amelia P50 and Amelia then paid just to get water supply.

For the meantime, affected residents from the creek side and in Anakpawis took shelter in Kasiglahan Village National High School.

In December 2016, Salvacion lined up along with other families for the abandoned houses in Anakpawis. The area, according to her, had long been unoccupied by people except for the tall and wild grasses, what is referred to as a talahiban in Filipino.

It was during the dead hours when the floodwater level rose neck-deep. prompting residents to scramble towards nearby elevated houses. Children were swept away by the flow of water along electric wire posts just to be rescued. With hairs moist and bare skin wet, all waited above roofs until sunrise and were stunned over waters that further reached waist-deep onto the second floor.

At this point of recounting the events, Salvacion could not contain her emotions.

It wasn’t as “masigla” or lively, ironic to the name of the village (Kasiglahan) with its current state in the aftermath of typhoon Ulysses that toppled and blacked out the houses, bringing a wet and miserable situation among residents.

Looking around the village, not a single street corner did not have a mountain of mud-soaked clothes and pieces of furniture piling atop the curb of each houses.

As a matter of fact, Salvacion’s husband had only saved his tricycle when the wrath of typhoon Ulysses purged the 1 K2 Anakpawis area.

Their family’s source of income also came from her home salon business; however, the equipment was not exempt from what had been inundated.

Amelia also shared the same sentiment as Salvacion with all her beauty products and picture frame business soaked in heavy mud.

These forms of side hustle or “raket” has become a staple business among small-scale money-earners like Amelia and Salvacion who wanted to at least make decent income for living.

Among the residents’ essential properties, important files such as birth certificate, diplomas, school report cards, and the rest of paper documents were drenched in muddy flood waters.

In fact, there also left a container box comprising a stack of books and modules along the streets.

Hazel, not her real name, worried for the schooling of her three children most stressing that they have lost most of their personal belongings and are only left with rain-soaked documents and clothes they wore on.

She said that there have been noises and chattering at around 9:00pm from the outside, seeing that her neighbors grew frantic over the intensive rainfall and hastily evacuated their respective houses.

By morning, they were informed that their houses submerged due to massive flooding.

While floods in the communities of Kasiglahan Village reach the rooflines, a family in Brgy. Banaba in San Mateo, Rizal was dumbfounded after their whole house fell under the riverside.

The said barangay seemed as if it was a catch basin from the bodies of water surrounding it having the Marikina River in the northwest along with the Nangka River in the southwest.

According to Shirley, there were five houses—three were suspended and two were on the ground—which fell down onto the waters.

Together with her husband, older brother, and brother-in-law, they returned to Shirley’s house after the flood subsided at around 7 in the morning. If not for her older brother, they would be included in the house which stumbled down in less than a minute soon as they quickly ran out.

Shirley lived in Brgy. Banaba for more than two decades and shared her previous experiences with the hazards of monsoon and other destructive tropical cyclones.

Typhoon Ulysses has in fact left thousands of Filipinos in distress, with their perished homes and communities being wrought in havoc just after Super Typhoon Rolly came in the country. From then on, things have gotten really aggravated prior to the drastic climate change.

What’s even worse when all these, including the hazards from the past; will all soon pass without the attainment of climate justice, giving adequate assistance to typhoon victims, and providing sustainable infrastructures in order to prevent future catastrophic disasters.

IN PHOTOS: Duque to resign, hold accountable for gross negligence on health workers