Home CULTURE Honey, Meat, and Water (the abuses of travel and the wisdom of... 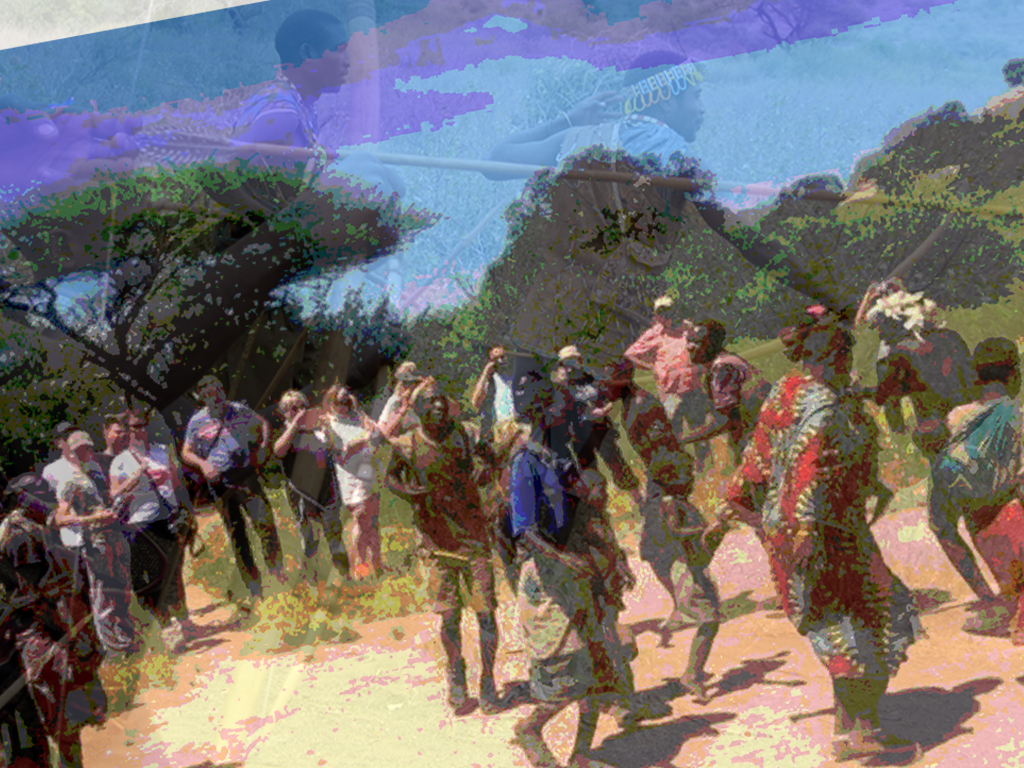 I saw a travel video on YouTube about the remote tribe of hunter-gatherers in Tanzania called Hadze or Hadzabe. This small tribe is considered to be one of a handful of the last remaining hunter-gatherer groups on the planet.

For decades now the Hadza, a community of 1,300 nomads, have been struggling to preserve their natural way of life against the intrusion of the Tanzanian state to appropriate their ancestral territory and to force them to relocate in hideous reservation camps where they are compelled to adopt the degrading, corrupting, and soulless wage system of modern society.

Most, if not all, travel videos like this are meant to be potentially inspiring, and yet they always fall short: they inevitably become mere objects of amusement—self-celebrating souvenirs of entertainment by mostly western travelers looking for adventure; unable to find a deep sense of meaning and purpose in the cities, they travel to the most “exotic” parts of the world hoping to stumble upon some sort of enlightenment to instill in their vacuous, anxiety-depression leaning lives.

The sudden fame of Ayahuasca, a miraculous plant found in the deep forests of South America believed to alter human consciousness, begets the same story. CEOs and privileged white collars have begun to flock in busloads the sacred forests of the south for a taste of that rare plant hoping to achieve “awakening.”

Is this not the case with tourism today?

“Tourism increases the reliance of indigenous peoples on a globalized economy and lessens their dependency on local resources. An increased reliance on a foreign, fluctuating, seasonal economy, as advanced by the conventional tourism industry, promotes industrialization and imports and sets up a mechanism for exporting local resources outside of the communities. The globalization of tourism threatens indigenous knowledge and intellectual property rights, their cosmovision, technologies, religions, sacred sites, social structures and relationships, wildlife, ecosystems, economies and basic rights to informed understanding — reducing indigenous peoples to simply another consumer product that is quickly becoming exhaustible.”

– THE HISTORY OF INDIGENOUS PEOPLES AND TOURISM, DEBORAH RAMER.

I once heard a story of an indigenous leader who complains about their rich guests who are willing to relinquish loads of money for a drop of Ayahuasca: “Once they get here, I cannot wait for them to get their enlightenment so they can leave us alone.”

Every time I come across travel videos about indigenous peoples, I feel sorry and disrespected for them. That they have to endure to be scrutinized and to be used for the purposes of accommodating civilized man’s trivial hunger for amusement and the insatiable impulse for childish adventurism (e.g. travel in the glibbest form which has become a staple of social media branding) is I think a form of degradation: a sly mode of corporate colonialism. In the end, the indigenous people in question barely benefit from this intrusion; their cultures exposed and made into virtual amusements, there is no serious and intimate engagement.

Anyway, the producer of the travel video in question sits with the tribe leader and asks him “some of life’s deepest questions” though they may not seem life-deep to those whose way of life is still close to nature and has not yet been corrupted by Western consumerism. I want to make use of this video and wonder about it.

What makes you happy? The traveler asks.
We are happy when we get honey and meat, answers Soloco, the tribe leader.
Water, adds Baboa, a boy of the tribe; you eat but if you don’t drink water you will die.

Now, wonder about these words: honey, meat, and water. And ask yourself: can we even reach that level of noble simplicity we who live in the cities – we who were schooled from childhood to adulthood to get, possess, acquire whatever we want, how much we want because we were taught to want so much and to be happy with much? Can we even conceive of our lives being happy with only honey, meat, and water – we who cannot endure a quarter of an hour without our smartphones and, I presume, the absence of an internet connection might mean a dive into utter despair? How petty our lives seem in contrast to these unjustly called uncivilized folks, how distant is their spirit from ours!

What happens after you die? the traveler asks.
When someone dies, we put him in a deep cave, bury him in a deep hole, then we kill a big animal and celebrate their death and we pray, and the body goes to the sun.

With the still ravaging pandemic in our midst which has claimed countless lives have we not learned to praise life by celebrating death through grief? Isn’t our craving to go back to normality—the normality that has driven us in the first place to disregard the sacredness of nature and consider it as a mere resource to suit our comforts—a manifestation of our growing incapacity for grief? Perhaps our westernized culture has altogether forgotten the ancient wisdom of grief. Martin Prechtel, author, and educator, and a Tz’utujil shaman, wrote:

“Grief is praise of those we have lost. Our own souls who have loved and are now heartbroken would turn to stone and hate us if we did not show such praise when we lose whom we love. A nonfake grieving is how we praise the dead, by praising that which has left us feeling cold and left behind. By the event of our uncontrolled grief, wail, and rap, we are also simultaneously praising with all our hearts the life we have been awarded to live, the life that gave us the health and opportunity of having lived fully enough to feel the loss we now grieve. To not grieve is a violence to the Divine and our own hearts and especially to the dead. If we do not grieve what we miss, we are not praising what we love. We are not praising the life we have been given in order to love.”

My friends let us sit together and celebrate life, let us not take for granted this honey, meat, and water under the sun.

Carlo Rey Lacsamana is a Filipino born and raised in Manila, Philippines. Since 2005, he has been living and working in the Tuscan town of Lucca, Italy. He regularly contributes to journals in the Philippines, writing politics, culture, and art. He also writes for a local academic magazine in Tuscany that is published twice a year. His articles have been published in magazines in the U.S., Canada, and the U.K. Visit his website or follow him on Instagram @carlo_rey_lacsamana.