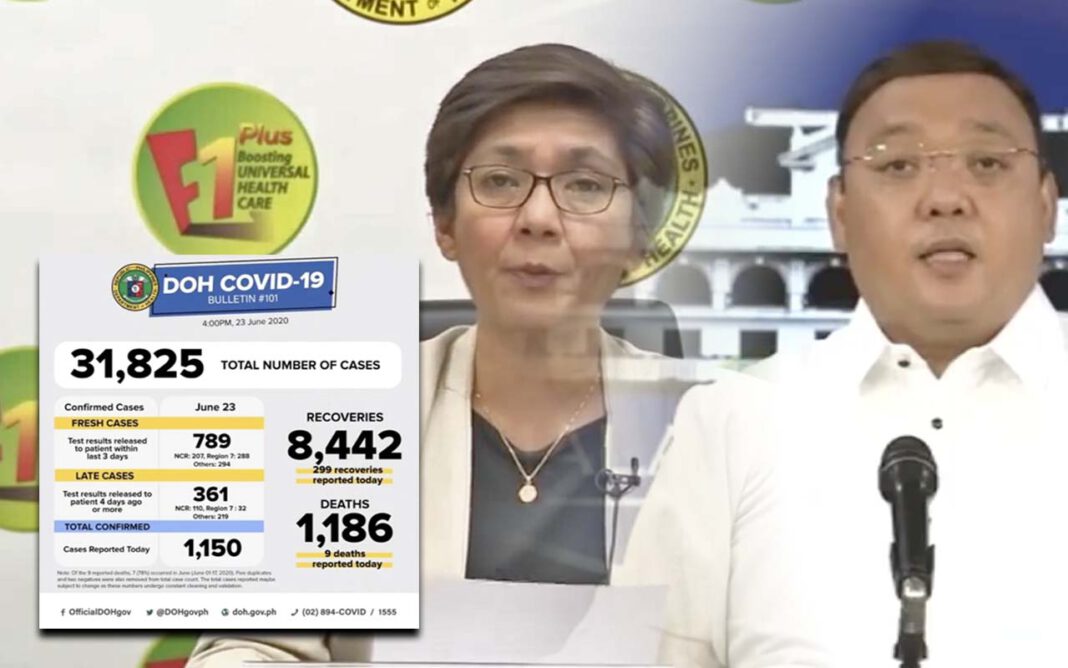 The Department of Health (DOH) reported a record-high 1,150 confirmed COVID-19 cases on June 23, also the 100th day since the lockdown in Metro Manila was imposed on March 15. Recoveries reported today are 299 while there were nine deaths. The total cases are now at 31,825, total recoveries at 8,442 and total deaths at 1,186.

The new tally also broke the record for single-day fresh cases of 789, beating the June 21 record of 578.

When the lockdown started, there were only around 50+ cases, three deaths and over a thousand tests.

Earlier, the Malacañang government presser said cumulative positive individuals are now at 38,500. The difference of 6,675 with the reported confirmed cases is the government’s validation backlog.

Presidential Spokesperson Harry Roque announced on June 23 that the Inter-Agency Task Force on Emerging Infectious Diseases (IATF) has temporarily removed the “new normal” classification in its community quarantine phases as it eyes to keep coronavirus lockdowns in place for now.

[For now, there will be no more new normal. This means that all areas in the Philippines will remain under community quarantine.]

It was upgraded to ECQ or total lockdown on March 17 with the whole of Luzon and was extended twice up to May 14 with select areas in the country, while others shifted to general community quarantine (GCQ) which was then the “new normal.”

A third extension placed NCR or Metro Manila under modified ECQ (MECQ) from May 15 to 31, making it the longest lockdown in the world of 77 days along with Cebu and a few other areas.

NCR was placed in GCQ on June 1 to 15, along with a few areas, still the strictest lockdown then, while others shifted to modified GCQ (MGCQ). Local government units under MGCQ may still place localized lockdowns under smaller areas

By June 21, Roque said that 19 areas in NCR are under localized lockdown, including five streets, five sitios and nine barangays.

From June 15 to 30, NCR was placed under GCQ but Cebu City was reverted to ECQ and Talisay City to MECQ, the first time that the strictest lockdown was not in NCR.