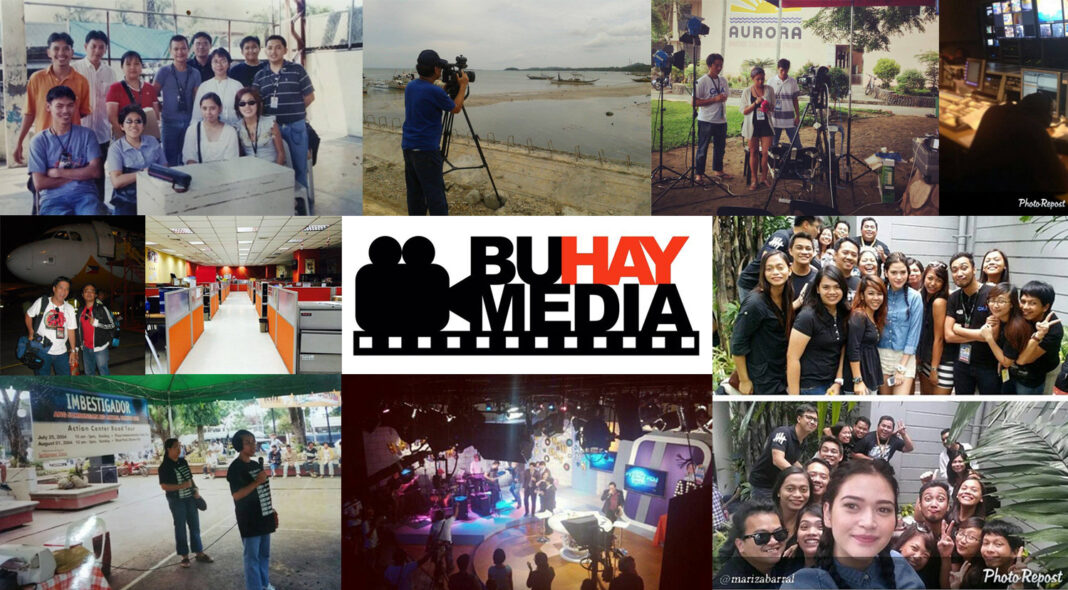 Chloe Garcera-Ben worked for almost 13 years in GMA Network Inc. (GMA-7), one of the three biggest media conglomerates in the Philippines. She found fulfillment in her job as the former head coordinator of the “Sumbungan ng Bayan” of one of GMA-7’s biggest public affairs program, Imbestigator. Despite the everyday stress caused by her work, listening to people’s complaints—some even crying in front of her—she said there is a sense of validation especially when some of them come back to her team just to express how thankful they are.

However, she already heard the last of it. Last month, the network did not renew her contract after she refused to sign the Project Employment Contract (PEC), the revamped version of the previous contract offered by GMA-7 to its talents. This was how GMA 7 responded to the on-going labor dispute between the management and its talents.  The Talents Association of GMA (TAG) filed a case against GMA 7 due to unfair labor practice. GMA 7, however, denied the allegations.

“We have provided them with all the benefits due them under the contract, so there is no such thing as unfair labor practice. That is a generalization, and we know for a fact that that is a baseless allegation,” said Attorney Regino Moreno, legal counsel of GMA 7.

TAG filed a labor case against GMA-7 in the National Labor Relations Commission (NLRC) May this year. The case had undergone a mediation process, which prompted GMA 7 to come up with PEC. As stipulated in this new contract, benefits typically enjoyed by a regular employee (such as SSS, PAG-IBIG, and Philhealth, to name a few) shall be provided to talents. However, the contract also states that it shall expire in a year. Moreover, according to Bowe Cabaluna, TAG’s president, the contract actually does not guarantee regularization and security of tenure. TAG’s legal counsel noted that PEC is the kind of contract that is commonly designed for construction firms.

Bowe added that another striking aspect of the new contract is their 13th month pay where equal portions of which will be subtracted from their monthly salary.

Disappointed by the provisions stated in the PEC, members of TAG pursued the case against the media giant. In this light, GMA-7 appallingly decided to pre-terminate existing contracts unless the talents sign the new one. Because of which, TAG resolutely decided to elevate the labor case they filed against GMA 7, from “regularization” to “constructive dismissal”. On November 10, 2014, both parties are expected to submit their position papers to NLRC.

Despite fervidly working for GMA 7 for more than a decade, talents like Garcera-Ben will not be receiving any compensation from the network. It was simply because talents were never considered as regular employees.

Anatomy of a talent

Imbestigador associate producer Mike Manalaysay described “talents” as “second-class citizens.” According to him, non-regular employees who work in news, public affairs, and entertainment programs in GMA-7 were all regarded as talents. He further relates that as talents, they are not entitled to any form of benefit duly given to regular employees. Talents include executive producers, associate producers, segment producers, writers, researchers, edit supervisors, production coordinators, transcribers, and crew members of various programs’ technical teams.

Talents usually have to renew their contract depending on the date of its expiration. Prior to the introduction of the PEC, contracts were renewed on per program basis, and can last for as short as one month to as long as three years. Manalaysay, working for GMA-7 for 12 years, remains a talent and has already had his contract renewed for at least five times.

Like Garcera-Ben and Manalaysay, talents of around two thousand in number, including those in regional stations of GMA would have their contracts pre-terminated on December this year if they will not sign the PEC. Manalaysay’s contract is supposed to end on March next year but because he chose not to sign the PEC, he is about to lose his job by the end of the year.

Bowe Cabaluna, who has been with GMA 7 for nine years now, also pointed out that they work in a “no work, no pay” policy aside from getting “zero benefits”. Furthermore, “talents” don’t receive health benefits, overtime pay, and holiday pay. They are also not entitled to having a sick leave and vacation leave with pay.

GMA-7’s talents are compensated based on every episode successfully aired. Hence, when a regular episode fails to air due to certain circumstances (e.g. special coverages, emergency coverages, holiday coverages, etc.), talents do not get paid even if the program episode has already been completed and declared ready for airing. Female non-regular employees are not given the right to file maternity leave. Those who fail to come to work even for a valid reason simply do not get paid. And despite the danger associated with their line of work, medication or hospitalization assistance/insurance will not be provided by GMA-7.

A source who works in GMA-7 public affairs and who requested anonymity, disclosed to us that she earns ten thousand a month, with a rate of two thousand five hundred pesos per segment. She is a fresh graduate from a premier state university who works as a researcher for a GMA-7 show. She has to produce two segments per episode twice a month. She said it usually takes her the whole seven days of the week to research for the two segments. She expects her salary to increase incrementally once she renewed her contract in three months time.

According to Cabaluna, a researcher’s salary depends on the rating of the show—higher salary is given to workers in shows that rate higher. He said it usually ranges from twelve thousand pesos to sixteen thousand pesos.

For that, a common practice for talents to earn more is to get additional jobs within the network or what they refer to as “raket”. A segment producer can have two to three shows depending on the flexibility of his or her working schedule.

Cabaluna admitted that he likes to do rakets, although it’s difficult and unhealthy to the body. One time, he experienced breathing difficulties in the middle of a production process after he had not gotten enough rest.

TAG started to organize May this year. Their membership is composed of over a hundred talents from various programs.

As of now, TAG is “only a group of individuals with similar dispositions,” and not yet recognized as an organization inside their employer. Cabaluna said they will have their group registered, but they cannot apply as a union because they are not regular employees.

According to Cabaluna, they started conceptualizing the creation of the group months earlier than May as they realized many were grumbling about their plight.

But what further provoked them was the order by the Bureau of Internal Revenue (BIR) requiring them to generate their own original receipts (O.R.) whenever they will get their talent fees, as they are considered “service providers,” and not regular employees.

TAG is demanding for the regularization of talents, alongside benefits and salary increase, especially for those who have already spent many years with the network. They cited Article 281 of the Labor Code of the Philippines stating that “a probationary employment shall not exceed six months from the date the employee started working,” so the employee should be regularized after six months.

On September 30 this year, a case filed by a former cameraman of GMA 7 against the network was dismissed. The cameraman complained his dismissal without due process despite continuous work in the network. But it was rejected by the labor arbiter on the ground of lack of jurisdiction and because of the absence of “employer-employee relationship.”

Cabaluna said that they had an opportunity to talk with some of their bosses. However, the bosses said that “it’s beyond their control and they cannot do anything about it.” After five months in limbo, waiting for GMA-7’s response to their complaints, what the network presented them instead is the PEC.

Behind the camera scenes

For the public, working in the media industry—being in the middle of important events, meeting prominent people and travelling to many places—probably seems like a prestigious or glamorous job. However, according to the members of the TAG, most people do not know what is happening behind the camera.

Prestige also comes whenever their shows receive awards and recognition both locally and internationally. But the ironic thing, according to them, is most of the people behind the award-winning shows are talents themselves.

Cabaluna said that the reason for considering them as talents, according to the management, is the “fluidity” of their work schedule, unlike the regular ones who work for eight hours a day. The talents are usually the ones in the fieldwork—shooting, doing interviews, or looking for case studies. However, this often results to more than eight hours a day or five days a week of work. While the regular ones, who are of lesser number, are usually the ones in administrative posts.

Garcera-Ben said that she works like a regular employee—Monday to Friday, eight hours a day.

Aside from this, talents feel discrimination in their employment status in as common a situation as a company Family day or Christmas party.

“Kapag family day, kung regular [employee] ka, pwede mong dalhin ‘yung family mo. Pero kung talent ka lang, bawal. Kapag Christmas raffle, may magkaibang tambiolo para sa mga regular [employees], at iba pa ‘yung sa talents (If it’s family day, you can bring your family members given that you are a regular employee. But if you’re only a talent, you cannot. During Christmas raffle, there is a separate tambiolo for regular employees, and a different one for talents.),” Manalaysay recounted.

To further inform the public of their “real” situation in media industry, they created the Facebook page Buhay Media “to give a voice to the media workers who are experiencing unfair labor practices in the country.” They also use hashtag (#) 65days that pertains to the remaining days before the termination of their contract if they will not sign the PEC. They are also outraged by the fact that GMA-7 can easily replace them with newer talents despite their loyalty and dedication to the network.

Same system in all media networks

TAG expects their membership to diminish due on the pressure to talents to sign the PEC, lest they lose their jobs by the end of the year. Being a member of TAG instantly means not agreeing with the PEC.

Cabaluna said that they understand the decision made by some of their members to sign the PEC. Despite this, he said that they still receive an overwhelming support from other talents.

What they want is to change the talent system being practiced not only by GMA-7 but also by other, if not all, media networks, including the two of three biggest media conglomerates in the country, ABS-CBN and TV5. They plan to join forces with other talents across networks to call for a more humane working environment for all media workers.

“Ito nalang din siguro ‘yung maiiwan naming legacy. Kahit matanggal kami, at least masasabi namin na may ginawa kami (This is the legacy that we would leave. Even though we lose our job, at least we can say that we did something),” said Mike.