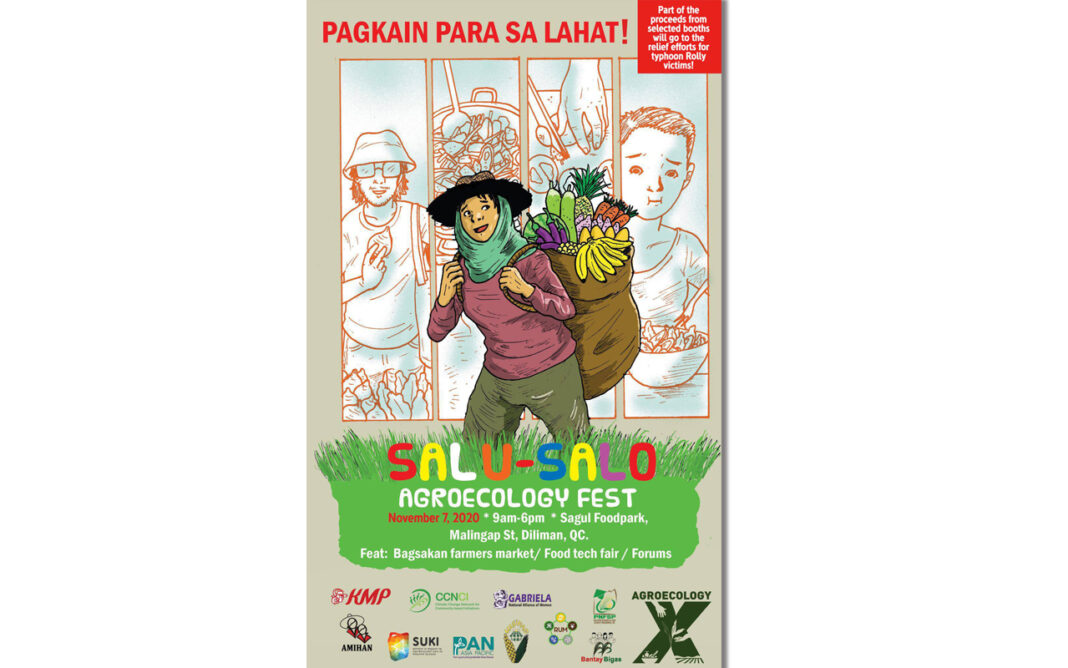 Food advocates from Agroecology Exchange (AEX) will be holding a day-long agroecology festival this November 7 in Sagul Food Park, Teacher’s Village, Diliman, Quezon City. Food talks and affordable healthy food items will be available from 9am to 6pm.

Dubbed as “Salu-salo” after the Filipino practice of getting together to eat, the organizers describe the event as a celebration of effective and appropriate local food systems.

The “Salu-Salo” agroecology festival is among the first events prepared by AEX as part of a year-long campaign towards a National People’s Foods Systems Summit in October 2021. The campaign is said to be “a grounded response” to the United Nation’s Food Systems Summit also set to happen in 2021.

AEX criticized the UN’s Food Systems Summit as “corporate-led,” after the UN sidelined civil society organizations in favor of corporate partners such as the World Economic Forum, an international organization of big corporations.

AEX is a community of organizations and other believer-doers of agroecology and stresses the need to discuss the present condition and the future of the country’s food systems as nationwide levels of hunger rise amid prolonged lockdowns. A

According to the advocacy group, various sectors will have to “salu-salo” – to get together and learn from each other’s perspectives and experiences in order to address the country’s food problems.

Exhibit and fair partners will showcase low-cost agroecological technologies and for-sale products such as food and crafts from small Filipino food entrepreneurs. Others will present economical and nutritious recipes and other food-related educational materials. The entire Sagul Food Park will be decorated to match traditional Filipino festival themes.

The event will feature about 20 booths prepared by AEX member organizations and other participants.

Food advocates and festival participants will also hold a “Kalansingan sa Tanghalian ,“ a call to clink-clank utensils and plates as a symbolic action to express the desire for a food systems change in an agricultural country yet “the poor majority of our citizens are going hungry, even our farmers.”

Having utilized the custom “salu-salo” in various ways for this festival, a real “salu-salo” lunch will also be held for attendees to partake, with the common aspiration or cause for celebration being the commitment and work towards a “just, self-reliant, and appropriate Filipino food system.”

The entire event will be streamed live on Facebook alongside a Twitter party with the hashtags #SaluSalo2021 and #PagkainParaSaLahat.

AEX invites everyone who loves food to participate in the event. The organizers assured that necessary health protocols will be observed.

#DutertePalpak: PH holds the world’s longest lockdown, and yet the campaigns are still the same