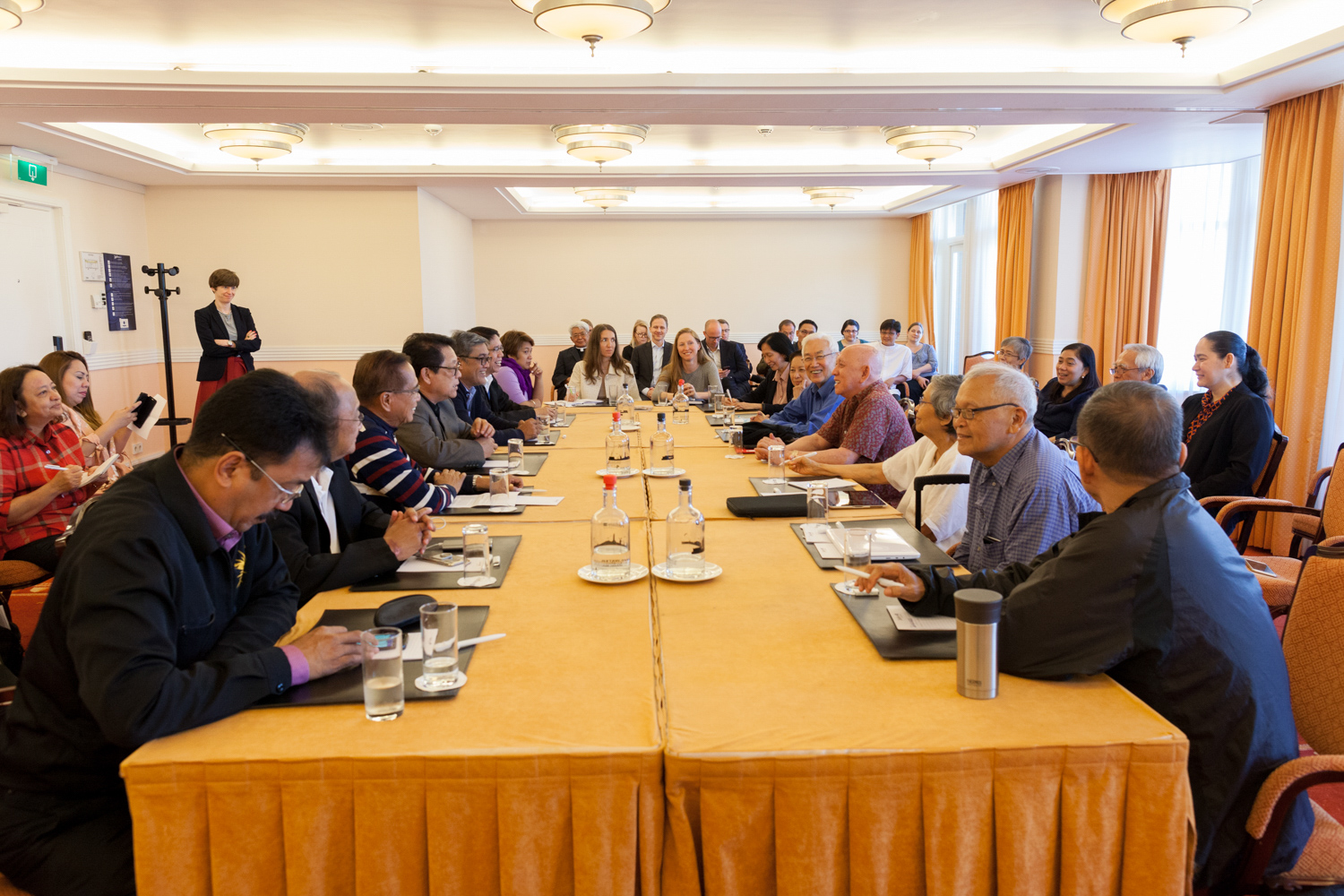 The scheduled start of the formal peace talks on May 27 looked bleak after media covering the talks in Noordwijk aan Zee, The Netherlands broke the story that the GRP cancelled the talks.

The stories came reportedly from the ambush interview with National Democratic Front of the Philippines (NDFP) Senior Adviser Luis Jalandoni, who spoke of the need to respect and uphold the Comprehensive Agreement for the the Respect of Human Rights and International Humanitarian Law (CARHRIHL), which is the first agenda in all rounds of talks as it lays the ground for trust and confidence building measures between the two parties. Jalandoni decried the intensification of the GRP’s war against the people since the February all-out war declaration by Defense Secretary Delfin Lorenzana, now aggravated by Martial Law in Mindanao.

The cancellation of talks was ultimately confirmed by the would-have-been opening statement of Office of the Presidential Adviser on the Peace Process (OPAPP) Jess Dureza released after Jalandoni’s interview.

Dureza’s opening statement handed to the NDFP said that they would not participate in the talks, and it seemed to leave no room for talks to proceed this round.

“The government panel is now left without any other recourse but to announce with due respects to our counterparts and to our facilitator, The Royal Norwegian Government, that it will not proceed to participate in the scheduled 5th rounds of peace negotiations until such time as there are clear indications that an enabling environment conducive to achieving just and sustainable peace in the land through peace negotiations across this table shall prevail,” according to Dureza’s opening statement.

In the press con, however, the GRP panel members maintained that they are willing to push through with the talks.

“This is a temporary setback, but like any other process, it should not be considered as the end of the process. It should in fact encourage both parties to find ways of getting back to the course of the peace process,” added GRP Peace Panel Chair Silvestre Bello, III.

Before all this, at the beginning of the day, a panel-to-panel meeting was held where the GRP told the NDFP and the RNG its decision not to participate in the talks. The NDFP said they would reply to Sec. Dureza’s opening statement and another panel meeting was scheduled for the NDFP to make its reply to the GRP.

NDFP Chief Political Consultant Jose Maria Sison and Negotiating Panel Chair Fidel Agcaoili would also release the statements they would have read had the talks opened on May 27.

In his statement, Sison emphasized that the NDFP is unwilling to engage in any prolonged and indefinite ceasefire agreement before agreements on social, economic, political and constitutional reforms which are substantial and beneficial to the people have been signed.

“The NDFP does not wish to fall into the trap of capitulation and pacification, betraying the trust of the oppressed and exploited masses of the people. It also does not wish to preoccupy the peace process with accusations and counter-accusations of ceasefire violations and put aside the people’s demands for basic social, economic and political reforms,” said Sison’s statement.

Meanwhile, Agcaoili said in his statement that the NDFP Negotiating Panel have been directed by their principals, the NDFP Executive Committee to firmly adhere to The Hague Joint Declaration which is the framework and set forth the substantive agenda of the peace negotiations. He also said that they were directed to demand for the GRP’s compliance to the Comprehensive Agreement on the Respect for Human Rights and International Humanitarian Law (CARHRIHL) which is an already existing agreement.

“If the GRP does not comply with this comprehensive agreement, there would be no point in making further agreements,” said Agcaoili’s statement.

Agcaoili, in another ambush interview, said that they have to be negotiating on the basis of sincerity and transparency.

“We have always been upfront: we want reforms before we can talk about ceasefire. we are willing to have a certain amount of ceasefire –unilateral — but we have to proceed with discussing reforms, to agree on reforms: social, economic, political. Because that is the reason for the armed conflict — the absence of justice, the presence of poverty in the country,” expressed furthered Agcaoili.

In the ambush interview, Agcaoili was asked for a reaction on the statement of Presidential Spokesperson Ernesto Abella, announcing the cancellation of the talks published by PTV4, which by then the NDFP panel chair has not read.

The statement of Sec. Abella would show to contain the same points as Sec. Dureza’s opening statement.

“The government of the Philippines will not proceed with the scheduled 5th rounds of peace negotiations in The Netherlands,” said Abella in a statement.

Abella further said that the decision was reached in the light of the latest public announcement by the Communist Party of the Philippines (CPP) to accelerate and intensify its attacks against the government due to the President’s declaration of martial law in Mindanao.

Agcaoili clarified that the CPP has issued a call for the intensification of military operations as early as March in reponse to, one, Lorenzana’s declaration of all out war in February and Duterte’s statement in March to “bomb them, flatten the hills, collateral damage does not bother me.”

“So in response to these two statements, the CPP issued an order for the intensification of military offensives. Now that has been going on from March until now. Now comes this declaration of Martial Law. Then Lorenzana again said that the NPA was a target. In this declaration of Martial Law, and so the CPP has decided to re-issue its order, this time calling for further intensification,” clarified Agcaoili.

The NDFP would then release a press statement in response to Sec. Dureza’s statement, then already released to the press, that the GRP’s unreasonable demands for “1) that the CPP rescind its order to the NPA that was in the main responding to the intensified AFP military operations nation-wide before and after Duterte’s declaration of martial law in Mindanao and, 2) that the NDFP immediately sign a joint ceasefire agreement even without the necessary agreements on social, economic and political reforms in place.”

“This seemingly vague statement was actually an ultimatum served on the NDFP to collapse the talks unless it submitted to the following demands…These unreasonable demands have disrupted the fifth round of formal talks,” said the NDFP in its statement.

Amid deferment of formal talks, the NDFP Reciprocal Working Committee on Social Economic Reforms (RWC-SER) continued to work on their draft of the CASER and expressed that they have finished the reformulation of contentious issues in first of three major parts of the agreement, on agrarian reform and rural development (ARRD), hoping that the formal meetings in CASER would then be hastened. The working committee released a video where NDFP consultant Randall Echanis discussed their expectations for the fifth round of talks: finishing a common draft on the ARRD and starting discussion on the second part on national industrialization and economic development.

They said in a statement that the most “enabling environment conducive for the achievement of a just and sustainable peace” is the discussions on the Comprehensive Agreement on Social and Economic Reforms (CASER).

“We came prepared and ready for the fifth round of talks. We came here with the sincere intention of finishing the discussions on agrarian reform and rural development (ARRD) and starting deliberations on the next two important sections of the CASER draft — national industrialization and economic development (NIED) and environmental protection, rehabilitation and compensation,” said Randall Echanis, member of the NDFP RWC-SER.

Another panel-to-panel meeting was held in the morning of what should have been the second day of the fifth round of talks. There was no public information released on the contents of the meeting. The only thing for certain is that there is still yet no cancellation of the current round of the talks.

Meanwhile in the Philippines, Duterte said in his speech during his Visit to Camp Teodulfo S. Bautista in Jolo, Sulu, he called on NPA members to surrender arms.

The President even compared the revolutionaries to the Maute group.

At 8pm, GRP held another press conference announcing that they are still unwilling to participate in the 5th round of talks, in effect, cancelling the scheduled talks.

“We are maintaining the decision made not to participate in the 5th round of talks with the Communist Party of the Philippines and the New People’s Army and the National Democratic Front,” said Dureza during the second press con.

Dureza claimed that there are no compelling reasons for the GRP to change their decision that has been arrived at and which we announced on May 28.

“What is clear is that we are withdrawing form the 5th round of talks. We are not terminating the talks,” clarified Bello.

Dureza further claimed that they don’t have yet that enabling environment conducive to peace negotiations.

“It’s their opinion. It’s their decision. It’s their own responsibility,” reacted Agcaoili in a separate press conference after the GRP announced their withdrawal from the 5th round of talks.

However, Agcaoili expressed the NDFP’s willingness to continue the talks and finish the work of the existing committees drafting the agreements.

“Immediately, we would like to sit down and finish the work on CASER, if they would be willing to meet informally for the Joint Monitoring Committee to meet,” said Agcaoili.

The second day, and what should have been the fifth round of peace talks, was concluded with the Royal Norwegian Government’s Special Envoy to the GRP-NDFP Peace Talks Elisabeth Slattum’s hopeful note despite the cancellation of the 5th round of talks.

“It is important to remember that all peace processes go through difficult times. Norway has worked for a long time on a range of peace processes around the world and it is our experience that what defines a successful peace process is not the absence of crisis but the ability of the parties to overcome them and push through,” said Slattum.

Slattum noted the dedication and commitment of both parties for the negotiation and hopeful for the parties’ return to the negotiating table.

“Norway is very hopeful that both parties will be able to return to the negotiating tables very soon,” concluded Slattum.