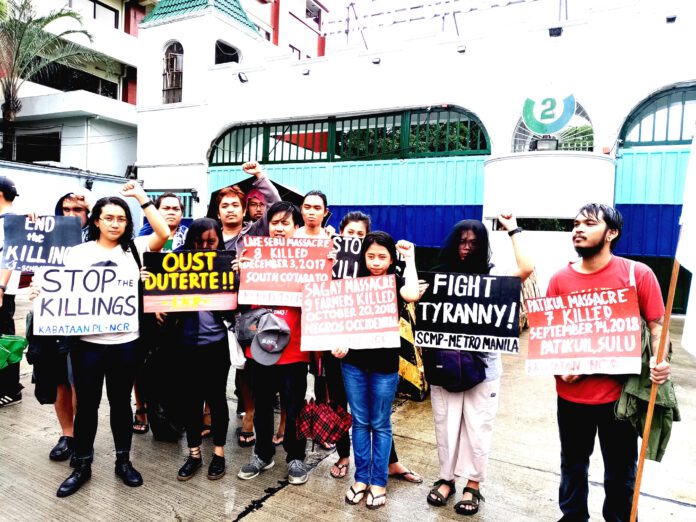 On December 2018, Pres. Rodrigo Duterte signed Executive Order 70, institutionalizing the “whole-of-nation approach” to supposedly address the internal armed conflict in the Philippines. The joint AFP-PNP counterinsurgency program, which succeeds Oplan Kapayapaan and now goes by the name Oplan Kapanatagan, and by which the whole-of-nation approach gains traction, aims to use government agencies and civil society to attain “inclusive and sustainable peace” amid communist rebellion. But ever since the program was launched, Oplan Kapanatagan has been everything but.

Lest we relegate those killed under this bloody scheme as mere statistics, we remember them as they were: persons who left behind families, rights defenders, or innocent civilians.

Oplan Kapanatagan and its whole-of-nation approach does not distinguish between combatants and civilians.

For the army and police, marching in protests and carrying a placard is the urban equivalent of treading mountain paths with a gun slung around the shoulder.

The whole-of-nation approach, with government agencies getting onboard, takes on many forms, with most recent cases being the following:

Of all the state’s tactics to quell insurgency, most deceitful is the AFP’s grand orchestration of worried mothers looking for their ‘missing’ children who were ‘brainwashed’ and ‘kidnapped’ by the Communist Party of the Philippines ‘through their front organizations Anakbayan and League of Filipino Students’ among others.

Two of the youth activists in question have since clarified on social media and national media that they have not been missing, and that they joined national democratic mass organizations on their own volition.

So why lie, AFP? Why silence dissent, when dissent is fundamental to every democracy? Why risk betraying your commander-in-chief as a coward hiding behind power and military might?

What is true amidst all these falsehoods is that there is nothing wrong with students and youth joining activist organizations.

That it is only right to hold government accountable for anti-people and anti-youth policies. In fact, is it not the military who should be held accountable for the enforced disappearances of student activists like Karen Empeño and Sherlyn Cadapan? Is it not the police who should be castigated for killing Kian delos Santos and more than 74 minors under Duterte’s three-year ‘relentless’ and chilling war on drugs?

To hold rallies is a guaranteed right in the Constitution. So does the right to not be persecuted for your political beliefs. We have the right to freedom of expression, association, assembly, to petition the government for redress of grievances, movement and the security of our persons among others. Even to rebel as a last resort against the government’s tyranny and oppression is enshrined in the Universal Declaration of Human Rights.

With the socio-economic and political exploitation, we struggle with under Duterte and his fascist minions, we are left with the choice to live with diminishing dignity, to perish or to fight.

Duterte and AFP’s whole-of-nation, Oplan Kapanatagan, drug war and vilification of youth activism are acts of pure cowardice. These tyrannical acts themselves become the youth’s recruiter to activism and even to armed rebellion.