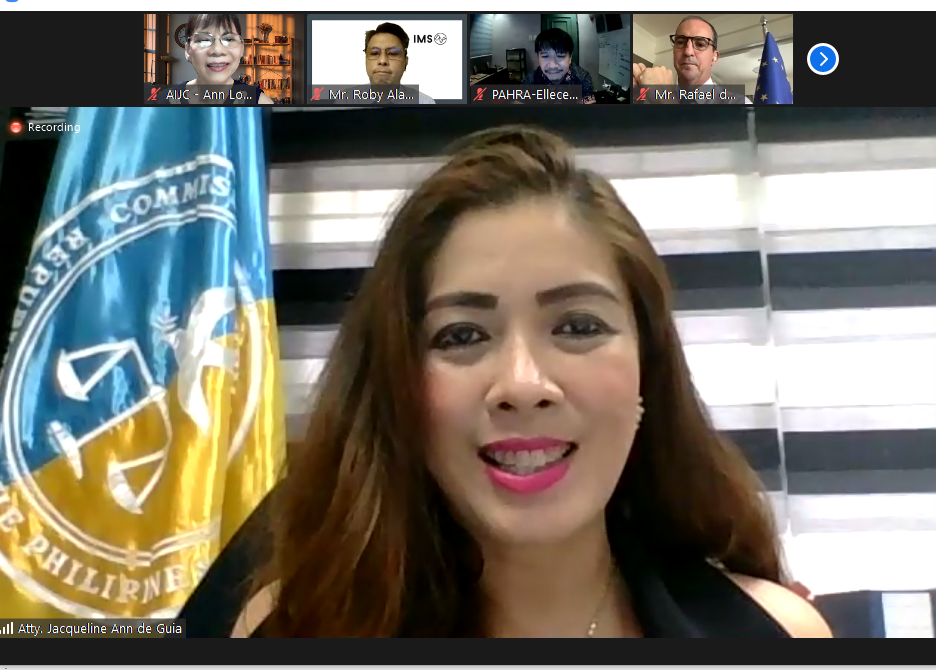 The speech was part of the online launch of the European Union-funded project, “Safeguarding Journalists and Human Rights Defenders in the Philippines” (2021-2022), to be implemented by International Media Support (IMS) and the Asian Institute of Journalism and Communication (AIJC).

The launch was organized as part of the World Press Freedom Day 2021 celebrations and centered on CHR’s plans to boost its mechanisms for media safety, as part of the CHR’s contribution to the implementation of the Philippine Plan of Action on the Safety of Journalists (PPASJ).

“The state of press freedom in the country is a cause for concern for CHR,” she said.

In response to this situation, the CHR is enhancing media and public safety mechanisms such as monitoring and investigation, helpdesks, public awareness and addressing journalists’ mental health among others.

De Guia noted that in 2018, CHR issued a resolution formalizing the creation of a Task Force on Media-Related Extrajudicial Killings to monitor and investigate attacks on the press.

Twenty-one journalists killings have been docketed for investigation in different CHR regional offices covering July 2016 to May 2021, while 7 cases involving 20 victims of other alleged human rights violations, including unlawful or arbitrary arrest or detention, frustrated killings, and red-tagging are also under investigation.

De Guia said that the commission’s Citizens Help and Assistance Division has promptly dispatched Quick Response Teams whenever necessary and through the CHR Strategic Communication Division.

The CHR has also worked on raising public awareness on situation of journalists through public statements and various engagements in different platforms—online, on-air, and offline.

The CHR teamed up with the National Union of Journalists of the Philippines (NUJP) in organising a webinar on mental health for journalists covering the Covid-19 pandemic situation in the country.

De Guia underlined that taking a “multi-stakeholder approach” or “all of society approach” to media safety can “bring protection of journalists and media workers to a larger awareness and action.”

“We hope as well that this mechanism provides us a way forward in coordinating with and relating to police and military personnel who are duty bearers as well as partners in ensuring the safety of journalists and in guaranteeing our civil liberties and rights,” said NUJP Chairperson Jonathan de Santos.

A question raised during the forum on PNP red-tagging journalists in their official social media accounts was yet to be answered.

The PPASJ is a document anchored in the UN Plan of Action on the Safety of Journalists and the Issue of Impunity, and the first national plan of action completed in line with UN’s call.

This document served to guide stakeholders in defending the right to freedom of expression and press freedom.

It was developed in a multi-stakeholder participatory process (including journalists, human rights workers, media outfits, government agencies including police and military, etc.) under a previous EU-supported project by IMS and AIJC, “Safeguarding Press Freedom in the Philippines” (2018-2020). The PPASJ was launched in 2019.