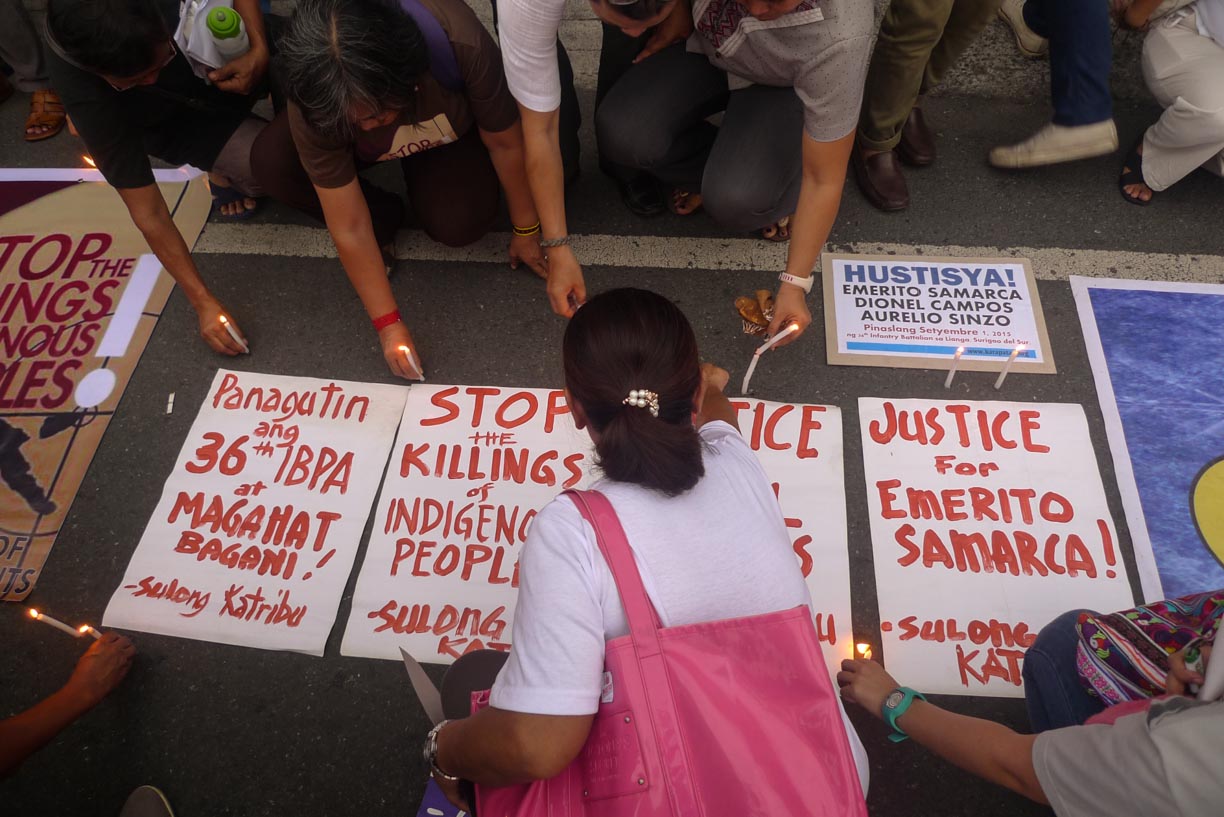 Progressive groups expressed outrage over the killing of three persons in the town of Lianga, Surigao del Sur, yesterday morning, allegedly by armed elements of the paramilitary group Magahat-Bagani Force. A short program was held in front of the Quezon City Sports Club along E. Rodriguez Avenue before nightfall.

Karapatan reported that one of the victims, Emerito Samarca, 54, executive director of Alternative Learning Center for Agricultural and Livelihood Development (ALCADEV), was found dead with his throat slit and hands tied inside a classroom in the school compound in Han-ayan, Lianga, Surigao del Sur.

About three kilometers away from the school, community members in Sitio Km.16 saw the killing of Dionel Campos and cousin Bello Sinzo. The two were allegedly shot in cold blood by other members of the paramilitary group. Campos was the chairperson of Malahutayong Pakigbisog Alang sa Sumusunod (MAPASU), a local organization of farmers.

According to Karapatan, elements of the 36th Infantry Battalion and the Magahat-Bagani Force had already encamped at the ALCADEV school compound two days prior. They occupied the function hall and parts of the school grounds.

On August 31, the paramilitary group burned down the community cooperative store of MAPASU and fired indiscriminately around the village.

Before daybreak the next morning, residents were roused from sleep by the sound of combat boots kicking at their doors. They were rounded up and ordered to gather at the center of the community at Sitio Km.16. Among them were cousins Campos and Sinzo.

“I met him way back in 2012. Tatay Emok shared his experience in ALCADEV. He told us how they were able to face the challenge of providing primary and secondary education to the Lumads,” he reminisced.

For Mañano, the school symbolizes hope and the Lumads’ unity. It has taught them how to become self-reliant.

He lamented that military troops occupy schools of the Lumads and harass the teachers. But this time, the paramilitary groups showed how bloodthirsty they are, by killing a school head.

Samarca was already in ALCADEV when it was founded in 2004. He started serving as executive director in 2012.

The program closed with candle lighting to demand justice for the victims.