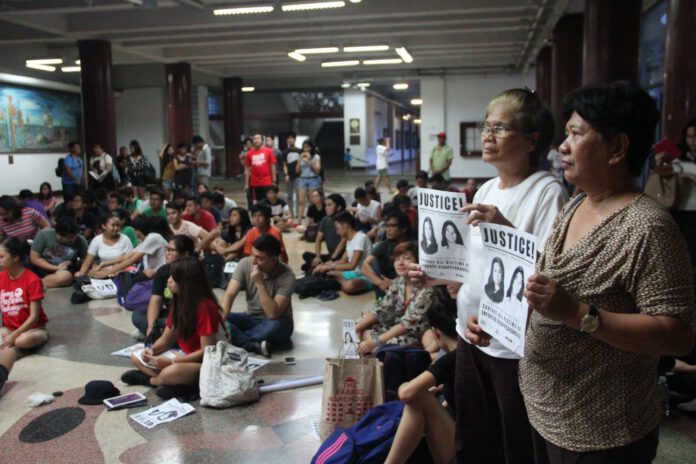 No less than the mothers of Karen Empeño  and Sherlyn Cadapan attended the gathering last Friday in commemoration of the ninth year of the disappearance of the two missing University of the Philippines (U.P.) Diliman students.

Concepcion Empeño  and Erlinda Cadapan joined human rights groups and student activists gathered at the U.P. Diliman AS lobby to intensify the call to surface Karen and Sherlyn,  who were also believed to be tortured and sexually molested by the military under the command of the retired Army Major General Jovito Palparan.

June 26 coincides with the annual United Nations International Day in Support of Victims of Torture.

In an interview with Manila Today, Cadapan called attention to the country’s slow justice system.

“We follow the due process, but it remains sluggish as the hearing keeps being postponed.  It keeps being delayed, and sometimes there is no hearing at all. It is there strategy to make the case slow-moving,” she said.

Despite having a strong and credible witness of the torture of her daughter, Cadapan said that the case is still difficult to proceed as hearing keeps being delayed.

“Raymond Manalo was one of those who were abducted and tortured.  Raymond’s testimony is a strong and credible evidence as he had seen with his two eyes the torture of my daughter by the military,” Cadapan said.

In February of this year, Manalo narrated at the Bulacan Regional Trial Court the torture of Karen and Sherlyn while in detention by the military allegedly under the order of Palparan. Manalo was also abducted and tortured in 2006. He escaped the following year.

Nine years past the abduction, Mrs. Empeño  and Mrs. Cadapan are still looking ahead to the day of their daughters’ return. The event last Friday became an avenue for the two mothers to relate their longing for their missing daughters.

Cadapan called her fellow advocates to fight against the country’s culture of impunity of the past and the present administrations including the military.

“We have been searching for Sherlyn for nine years. I do hope that someday we will see and hug each other,” Cadapan said.

Empeño  also expressed her revulsion against fascism in the military.

“I have been carrying this hatred against the military for nine years. I will never stop searching for my daughter and seeking for justice so long as I remain alive,” Empeño  said.

Cadapan called human rights advocates and student activists of today’s generation to stop the culture of impunity and human rights violations by the Philippine government.

“Even if the military dismisses the abuses, your generation should not stop fighing.  Let us be reminded that Karen and Sherlyn were not the only victims of human rights violations in this country,” she said.

Cadapan underscored the role of the president in bringing justice to the victims.

“Let us be watchdogs to this government’s culture of impunity. I thought that the new administration would surface my daughter, but it never happened. The GMA and Aquino administrations are just the same,” Cadapan.

Empeño  challenged the youth to follow the footsteps of her daughter.

“Let’s continue the fight that Karen had started. And to all of you who are just starting, I hope you continue to fight for our rights,” she said.

Participants also called for the release of U.P. extension program in Pampanga alumni Gerald Salonga and Guiller Martin Cadano who were arrested in Nueva Ecija in August 2014.

Salonga, a member of Anakbayan, and Cadano, a member of Kabataan partylist, have been detained at the Provincial Public Safety Company (PPSC) headquarters in Nueva Ecija.

Amador “Boy” Cadano, father of Guiller, led the call to free all political prisoners in the country.  He mentioned that the pre-trial is set in August. Despite so, he said that, in sum, the wheels of justice in the country remain slow-moving.

Human rights group Hustisya secretary general Ma. Cristina Guevarra said that the abduction of the activists is a “rotten tactics” of the Philippine National Police (PNP) and the Armed Forces of the Philippines (AFP). It was expected that the said government agencies made false accusations against the two.

The group said in a statement that the Aquino administration has failed to give justice to the victims of human rights violations. Instead, illegally arrest of activists has continued.

The event also called for justice for the murder of botanist Leonard Co.

Fellow biologist John Warner Carag, a member of AGHAM Advocates for Science and Technology for the People, hailed Co as one of the greatest botanists of the country. He said that his group is ready to raise the campaign for justice in the international scene.

AGHAM asked the Department of Justice last year for a resolution to hold the military accountable for the slaying of Co.

Co was conducting a biodiversity research inside the property of Energy Development Corporation when elements of the 19th Infantry Battalion under the 802nd Infantry Brigade of the AFP indiscriminately fired at his direction. Four other members of his team were also killed during the incident.