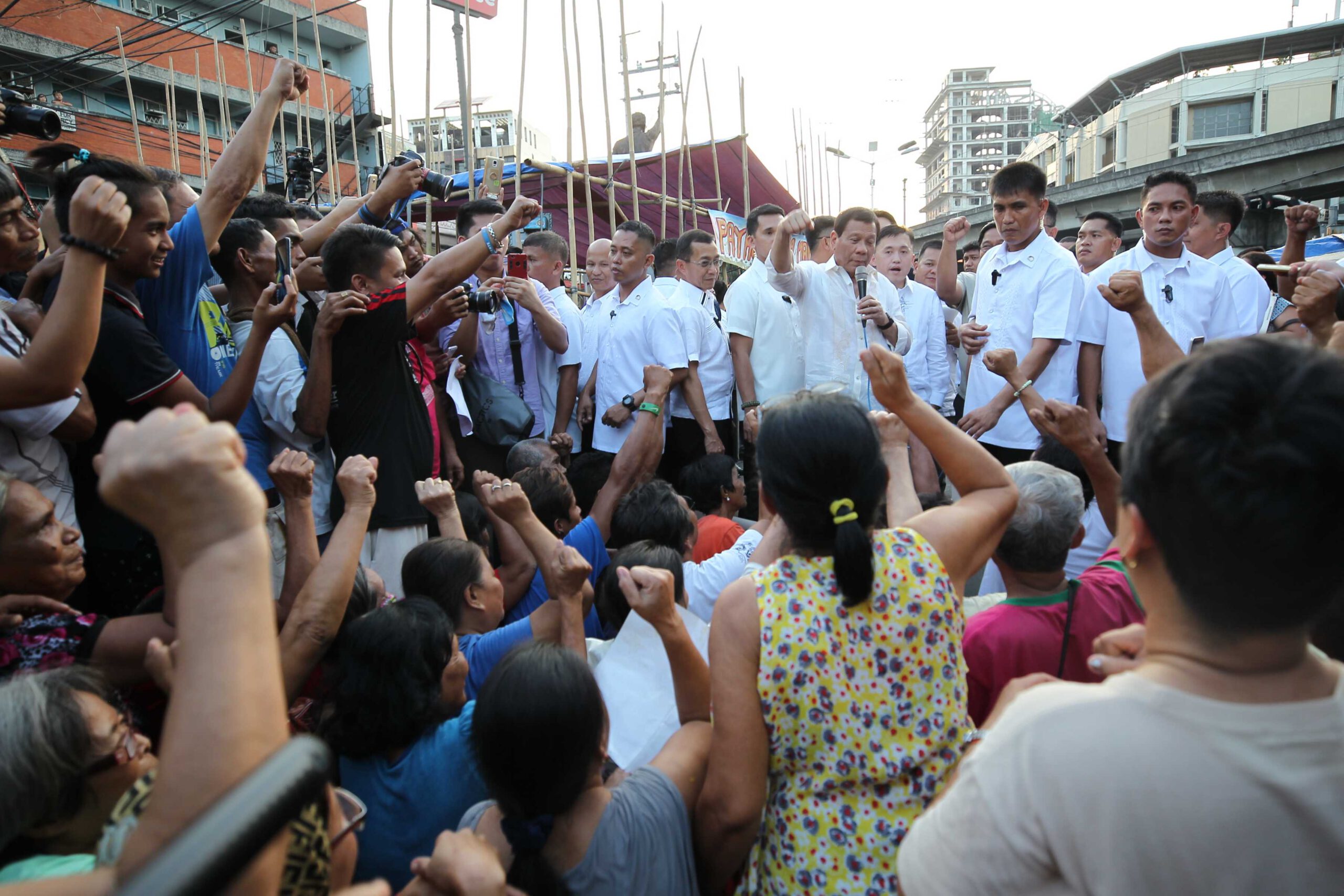 On a Tuesday afternoon, President Rodrigo Duterte while raising his clenched fist became the first ever President of the Republic of the Philippines to visit protesting agrarian reform beneficiaries camping out near the Malacañang Palace on May 9.

According to Anakpawis Party-list Representative Ariel Casilao, Duterte has visited protesters in their camp outs and talked to them in their picketlines when he was still Davao City’s mayor.

The Madaum Agrarian Reform Beneficiaries Association, Inc. (MARBAI) from Tagum City in Davao del Norte have been camping out in Mendiola, Manila since May 1 to attempt to talk to President Duterte and Philippine National Police (PNP) Chief Ronald “Bato” dela Rosa. They want Duterte and dela Rosa to intervene in the reinstallation of the 159 agrarian reform beneficiaries (ARBs) in the 145-hectare banana plantation which is controlled by Lapanday Food Corporation in Madaum, Tagum City.

On April 18 and 21, Department of Agrarian Reform (DAR) Secretary Rafael Mariano himself went to Tagum City to reinstall the agrarian reform beneficiaries but failed to implement the reinstallation due to lack of police assistance.

MARBAI members who were former members of the Hijos Employees Agrarian Reform Beneficiaries Cooperative 1 (HEARBCO 1) who bolted out from the cooperative, were forcibly evicted from their land in 2010 when they challenged the Agribusiness Venture Agreement between HEARBCO 1 and Lapanday Food Corporation, the sole buyer of banana produce.

During his visit to MARBAI’s camp out in President Duterte expressed his support to DAR Secretary Mariano’s order to reinstall MARBAI members in the Lapanday-controlled plantation.

“Kung ano yung nasa batas, sundin natin, kung makumpleto ang requirements ng batas ako na mismo ang nagsasabi kay Secretary Mariano, go ahead, ayaw na pag dugay-dugay, para matapos na ang problema diyan (We will follow what is lawful, if the what is required by the law is completed, I myself will tell Secretary Mariano, go ahead, do not delay it so your problems will be solved),” said Duterte when he faced the banana plantation workers in Mendiola.

In December 2015, the Department of Agrarian Reform Adjudication Board (DARAB) in Tagum City released its decision to order HEARBCO 1 to reinstate MARBAI members to their land in response to the latter’s petition.

On April 2016, DAR issued a Writ of Installation in favor of MARBAI members.

The President also said that landlords and companies should not make it difficult for the government to recover the property of the people.

“Isauli yan kasi nakuha niyo yan sa koneksyon ninyo kay Marcos, kay Aquino, hanggang ngayon. At ang bayad ninyo hindi sapat, at for 25 years, naging 50 years, tama na yan, panahon na isauli niyo yan dahil ipagbili ko yan kasi kailangan ko ng pera para ipambili sa lupa ng taong Pilipino (Return those [land] because you got it from your connections from Marcos, Aquino and up to the present. And what you paid is not enough. The 25 years became 50 years, that’s enough, it’s time you return it because I will sell it so I can have the money to buy land for the Filipino people),” said Duterte.

MARBAI members are in high spirits after Duterte’s visit.

“Natutuwa kami at uuwi kami sa amin ng hindi luhaan, na positive lahat nung hiniling namin na mayroon ng PNP na mag-aassist sa amin during the installation. Yun lang naman hiniling namin, break-open yung mga bakod na binakod ng Lapanday malapit sa area namin (We are happy that we will not go home in tears, that all we asked for had a positive response and hopefully the PNP will assist us this time during the installation. It is all we asked for, to break-open the fences that Lapanday placed near our land,” said Mely Yu, Chairperson of MARBAI.

Duterte also promised to treat them to dinner at Manila Hotel although the banana plantation workers and supporters chose to have a modest dinner in Mendiola instead. The President also promised to shoulder the expenses of the plane ticket back to Davao for the 200-delegation MARBAI members and their support group that came to Manila.

Three women and a minor arrested after dispute with guards, police...