Home FEATURES A story of a volunteer teacher to Manobo children 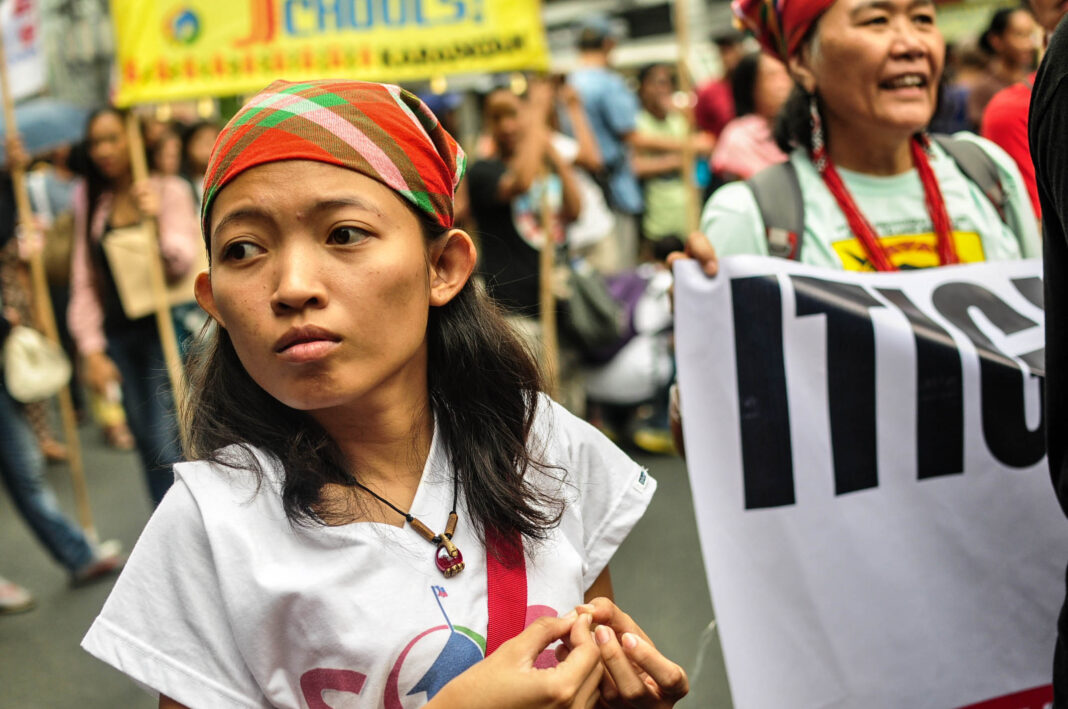 It’s 4 o’clock in the morning.

Ma’am Bel and her students wake up even before the sun rises to prepare for their class. Students are divided into several groups and assigned to different tasks: cooking their breakfast, cleaning their classrooms, dormitory and garden, and feeding the animals. They have goats, pigs, and chickens.

After getting their tasks done, the students will take a bath by turns. By 7 o’clock in the morning, it’s time for their flag ceremony.

Mabel Historia, 22, also known by her students as “Ma’am Bel,” is a volunteer teacher to Manobo, one of 18 Lumad indigenous groups in Mindanao. She teaches high school students in Salugpungan Ta ‘Tanu Igkanugon (translated as “Unite in Defense of Ancestral Land”) Learning Center in Sitio Nasilaban, Talaingod, Davao del Norte. She teaches several subjects, including Science, Values, MAPEH 2, and Filipino 1 and 2, as not so many teachers volunteer in far-flung areas.

Manobo children avail free education through the learning centers built by the Rural Missionaries of the Philippines of the Southern Mindanao Region (RMP-SMR), a national religious organization. Almost 30 schools were built over the past decade in different sitios (a territorial area forming a part of a barrio) in Talaingod, Davao del Norte.

According to Popoy, they would duck on the floor and cover their ears whenever the military would fire arms, which happened for several days in October this year. Some of his classmates would even cry. Popoy said the mere presence of the military is affecting their education. They cannot concentrate on their lessons for they are always frightened to see the armed men through the windowpanes of their classrooms.

Ma’am Bel and her grade 8 students traveled to Manila along with other indigenous groups and peasants suffering militarization in their communities to inform the public of their plight. Through their campaign, Og Iskwela Puron (translated as “To school I wish)”, and Save our Schools (SOS) network, they conducted forums and photo exhibits in different schools and government offices in Metro Manila to let the people know of their current situation and to call for the pull out of military troops in their areas. In the forums and gatherings they were invited, Grade 8 students performed a short skit narrating their story marked by courage despite terror from the military. They intend to stay in Manila until December 10.

According to Ma’am Bel, she finds joy as a volunteer teacher to the Manobo children. She is inspired by her students whom she describes as really thirsty for education.

Ma’am Bel is able to return home only twice a year, during All Soul’s Day and Christmas. 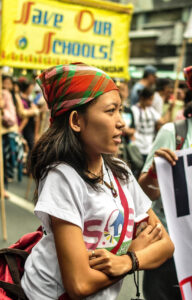 A friend asked her if she wanted to be a volunteer teacher to Manobos. She immediately replied positively because it was her dream to teach in far places. Ma’am Bel applied for the teaching post at the RMP-SMR’s learning center and got hired. But she knew she still had to get her parents’ consent.

She left with a heavy heart for not getting her parent’s support but she still pursued her plans. Now, two years has passed. Her parents have accepted her decision, gradually.

After finishing her degree in BA Secondary Education Major in Biological Science, she did not take any other job other than to be a volunteer teacher. As volunteers, they don’t get a salary but instead receive a modest honorarium.

The curriculum used for indigenous people goes beyond the usual curriculum. It is tailored to the culture and livelihood of tribal communities. They also study math, science, English, araling panlipunan (social studies) and Filipino among other subjects required to achieve the “minimum learning competencies” set by the Department of Education (DepEd). But they also take up agriculture as a school subject.

Some of their crops include palay, corn, abaka, cassava, and banana.

According to Ma’am Bel, there are a totalof 28 volunteer teachers in all the learning centers in Talaingod. Six of them are based at the Salungpungan learning center in Nasilaban where they teach high school students, grade 7 to 10, using the newly-implemented K-12 program by the DepEd.

Ma’am Bel said that many of the volunteer teachers would stay for just a year for the sake of experience, as the contract lasts for only a year before it is renewed. Some would not even finish it, leaving in the middle of the year, while only a few of them would last longer than a year.

Students see education as the key for them to not be fooled by deceitful capitalists, especially large-scale mining corporations showing great interest in their rich land and environment.

Ma’am Bel certainly knows how important education is for Manobo children. Before the learning center was built, the Lumad children did not receive any education, as they have not been reached by the primary schools of the government. According to Ma’am Bel, students see education as the key for them to not be fooled by deceitful capitalists, especially large-scale mining corporations showing great interest in their rich land and environment.

They believe that the intensified militarization in their area is not only part of President Noynoy Aquino’s counterinsurgency program, Oplan Bayanihan, but also aims to pursue and protect the interests of the mining corporations in the Southern Mindanao region. Southern Mindanao Region (SMR) has world-class deposits of copper and gold, especially in the areas of the Diwata Mountain Ranges in Agusan and Surigao provinces and in Compostela Valley and Pantaron Range in the provinces of Davao and Bukidnon. Their home in Talaingod is part of Pantaron Range, touted as one of the last remaining old growth or primary forest blocks in the country.

But for Ma’am Bel and her students, education does not end in their classrooms.

It’s 5 o’clock in the afternoon.

It is the end of class hours. But for Ma’am Bel and her students, education does not end in their classrooms.  The Manobo children, along with Ma’am Bel and other volunteer teachers, will continue to fight for their right to education and their right to ancestral land, even if they have to journey thousands of kilometers away from their homeland.

[Editor’s note: The students of Salugpungan Ta ‘Tanu Igkanugon who joined the Manilakbayan continue to receive education with Ma’am Bel while housed at the Salinlahi Alliance for Children’s Concerns. They have just finished taking their exams during the last week of November.]