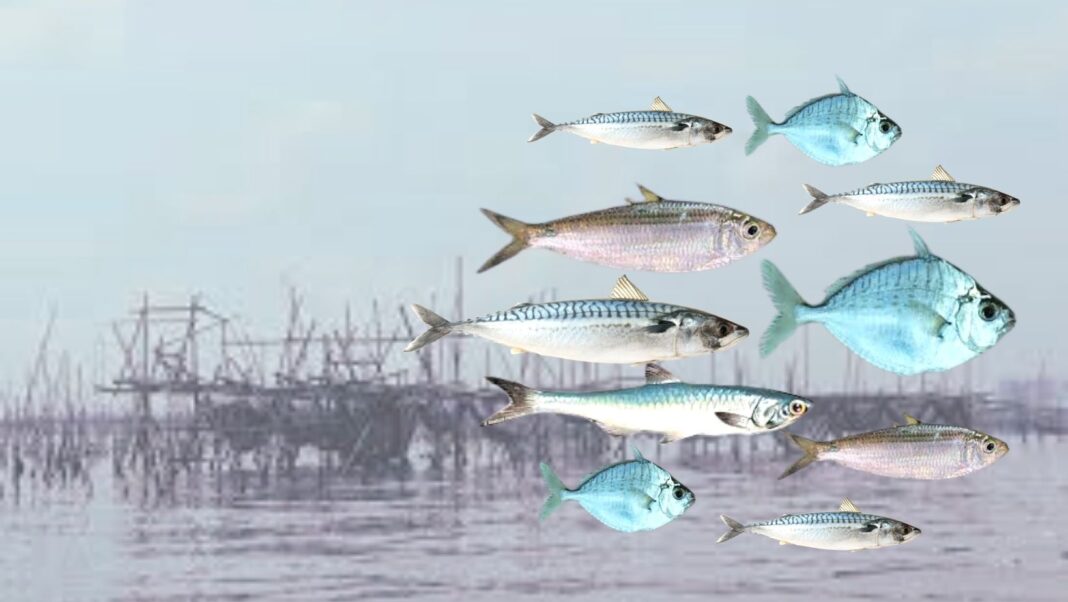 Manila Bay is one of the most important fishing grounds in the Philippines, contributing up to 3.24% to the total fisheries production of small pelagic fishes in the country [1].

The most common fishes caught in the bay include sardines (tamban), mackerels (alumahan), slipmouths (sapsap) and anchovies (dilis). Excluding Metro Manila, provinces that surround Manila Bay (Bataan, Pampanga, Bulacan and Cavite) recorded a total fisheries production volume of up to 30,804.55 metric tons and 6,736.42 metric tons in the marine municipal and commercial fisheries sectors, respectively, in 2020 [2].

Despite its important contribution to our country’s food security, Manila Bay faces various threats. Aside from pollution due to urbanization and mangrove decline due to mangrove conversion into fishponds, coastal development in the form of reclamation projects emerged as a new threat.

At present, there have been about 23 proposed reclamation projects along the coast of Manila Bay, some of which have been granted necessary documents, such as Environmental Compliance Certificates (ECCs) from the Department of Environment and Natural Resources (DENR) and Memorandum of Understanding (MOU) from the Philippine Reclamation Authority (PRA).

An estimated area of around 25,000 hectares will be reclaimed from the coasts of Bataan all the way to Cavite. Despite promises of economic development, these reclamation projects threaten marine biodiversity, migratory bird populations and coastal communities. Manila Bay is one of the most productive fishing grounds in the country, yet the inevitable destruction of marine ecosystems brought by the reclamation projects endanger coastal food systems all over the bay.

However, the said project was widely opposed by fisherfolk, coastal residents, scientists, and environmental organizations due to environmental concerns and human rights issues. The airport project will be built on a 2,500-hectare wetland composed of mangrove forests, mudflats, and fishponds, and will affect marine biodiversity and migratory bird populations as well as fisherfolk communities that depend on these ecosystems.

Mangroves are important to fishing communities in Manila Bay, yet their total area has dwindled in the past decades. Mangrove ecosystems serve as nursery grounds for juvenile fish as well as habitats for fishery resources such as mud crabs.

The northern and eastern coast of Manila Bay had high biomass of fish eggs and larvae, particularly from March to May [3]. These portions are areas where the few remaining mangrove ecosystems still exist. Their destruction, especially in Bulacan and Cavite, will have grave implications on fisheries production and could possibly endanger food security.

Reclamation deprives fisherfolk and fish vendors of their livelihood

Just approximately 15 kilometers from Navotas City, Metro Manila lies Isla Pamarawan, an island off the coast of Malolos City in Bulacan, where a community of fisherfolk living through fishing, fish processing, and salt-making

For decades, the residents of Pamarawan enjoyed the abundance of the sea. Fish, crabs, shrimp, oysters and many more aquatic resources are abundant on the coast of Bulacan. This abundance in fish and shellfish could be attributed to the natural productivity of Manila Bay.

While the actual site of the Aerotropolis is located in the town of Bulakan, fisherfolk in Malolos are now starting to experience the impact of the reclamation project. On May 28, the Citizen Armed Force Geographical Unit (CAFGU) of the Armed Forces of the Philippines (AFP) illegally demolished up to 6 units of fish corrals (locally known as baklad) off the coast of Pamarawan without prior notice to the owners or even to the local government unit. This happened several days prior to the issuance of an environmental compliance certificate (ECC) to SMC by the Department of Environment and Natural Resources (DENR). While compensation of 35,000 pesos (700 US dollars) was given to the owners, they were not allowed to rebuild their fish c

orrals. Additionally, forty-seven fisherfolk from Pamarawan, including 7 minors, were illegally detained by the CAFGU last October 29.

Moreover, fisherfolk claimed that dredging operations that started on July 5, 2021, caused the discolouration of coastal waters, which led to a fish kill for 6 days. The water turned the colour of coffee mixed with milk. Fisherfolk had nothing to catch and eat for three weeks due to this incident. Dredging operations also prevent them from fishing in their traditional fishing grounds as military personnel drive them away. They also claim that noise drives away fish, thus they are forced to venture farther to the sea.

The women in Pamarawan who are involved in fish processing and vending are also affected by the decline of fish catch. Dolores (not her real name) says that she used to earn at least 500 pesos (9.75 US dollars) per day from fish vending until the dredging operations began. Because fish catch declined, fisherfolk had no extra catch to give vendors to sell.

A few months ago, SMC personnel came and promised to provide a livelihood to these women, which has not yet been fulfilled as of press time.

Taking compensation with a grain of salt

Aside from fisherfolk, salt-makers were also affected by the Aerotropolis project. With the sale of salt farms, workers lost their livelihood. Although they were given a compensation of 250,000 pesos (4,800 US dollars), this was still not enough to purchase land and buy materials for the construction of houses.

“Ayaw ko talaga dyan! [I am really opposed to that!]” declared Arturo (not his real name), a salt-maker and fisher from Pamarawan, when asked about the Aerotropolis.

[I am against it. The poor will not benefit from it. It’s destructive. Of course, fear prevails in our community. The people are threatened. They think that we will not win. The project has just begun, yet they already deployed a military detachment in Capiz (a sitio in Taliptip). For us residents, how will we be able to fight that? Some of us would like to complain, but chose to remain silent instead because we don’t have the resources to oppose the government.]

Pamarawan residents are not the only ones affected. Aside from the Aerotropolis, SMC also plans to reclaim 18,000 hectares of the coast from Bataan to Bulacan for the Manila Bay Integrated Flood Control, Coastal Defense and Expressway (MBIFCCDE). This means that not only will Bulakan residents be displaced, but also the residents of other coastal towns in Bulacan, Pampanga and Bataan. A newly-declared Ramsar site (i.e., a wetland of international importance) in Sasmuan, Pampanga may also be affected by reclamation

[In the laws of God and men, the resources given by nature should not be destroyed by anyone. No one owns any of it but all people who live along the coast. They have the right to fish on it. If the coast and sea are destroyed, the fisherfolk will suffer. We don’t know how to farm, we can’t work in factories, we’re not allowed to do kaingin in the mountains. We don’t know anything. Where will we live if we leave our fishing communities? We the fisherfolk will suffer. We don’t know any livelihood aside from fishing.]

While SMC promises economic development in the region, marginalized sectors experience the opposite of it. The future may seem bleak for the coastal residents of Bulacan, but they will never back off. They will continue to fight for their rights, even if the government and SMC threaten them with the military. The sea and its people shall be free from exploitation.

Note: This article is published in time for the 3rd anniversary of the Manila Bay rehabilitation program, dubbed as “Battle of Manila Bay”, led by the Department of Environment and Natural Resources. AGHAM reaffirms its stand that reclamation is not part of genuine rehabilitation.