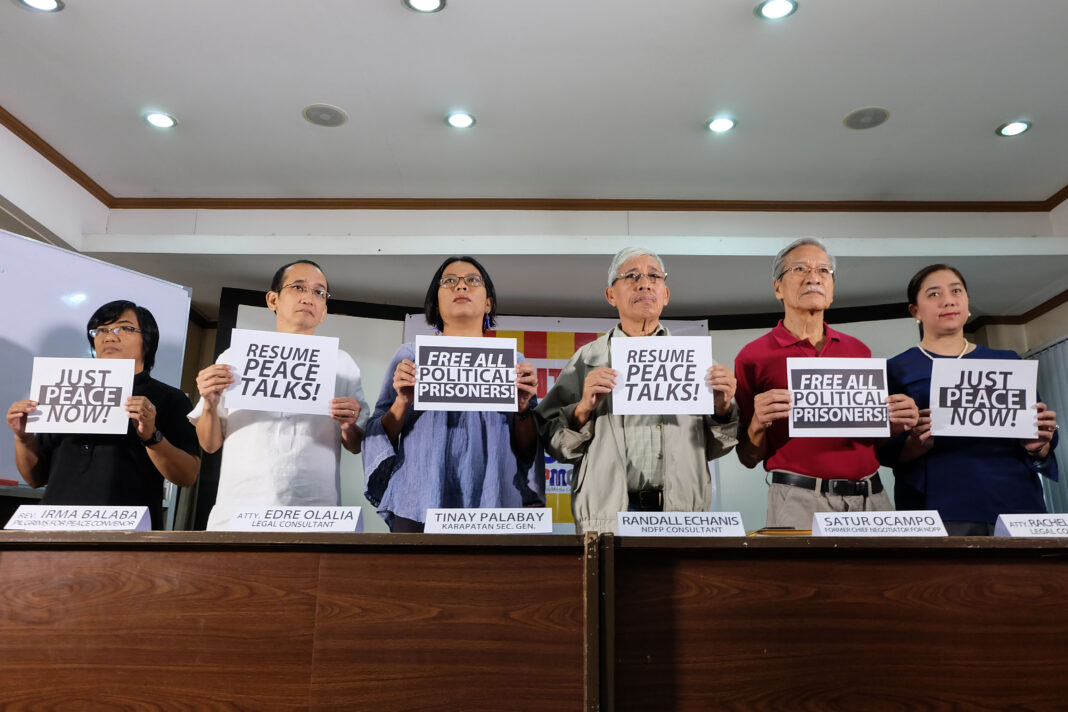 “Both sides are stating that we want to continue the resumption of peace talks on August 20,” said National Democratic Front of the Philippines (NDFP Peace Panel Chair Luis Jalandoni in a Skype forum on peace on August 6 in Quezon City.

When asked if what factors could affect the resumption of the talks, he said that “if the releases of 22 consultants and JASIG [Joint Agreement on Safety and Immunity Guarantees] protected is not realized for some reason or other, then, I think the NDFP side will reconsider whether it is better to postpone again the resumption of peace talks to give time for the releases because this will complicate the talks.”

The JASIG guarantees “free and unhindered passage in all areas in the Philippines, and in traveling to and from the Philippines in connection with the performance of their duties in the peace negotiations.” The agreement also guarantees the “immunity from surveillance, harassment, search, arrest, detention, prosecution and interrogation or any other similar punitive actions due to any involvement or participation in the peace negotiations.”

During the exploratory talks last June 14-15 in Oslo, Norway between the Government of the Philippines (GPH) and NDFP panels, they agreed to resume the talks on July, supposedly right after the President’s first State of the Nation Address. However, the GPH side suggested to reschedule the talks on August 20-27 to give the GPH more time process the release of detained NDFP consultants.

Two weeks before the formal talks between the GPH and the NDFP resume, no political prisoner has been released.

In a resolution released by the Supreme Court (SC) as response to the Office of the Solicitor General’s (OSG) petition for the release of 10 NDFP consultants, the High Court said that appropriate motions and pleadings should be filed in the local courts where the the cases of the consultants are heard. The OSG filed its prayer with the SC to order the local courts to immediately release the detained consultants.

According to Atty. Edre Olalia of the National Union of People’s Lawyers (NUPL) Alex Padilla, the then GPH Peace Panel Chair, filed a motion before the SC questioning the provisional release of Ladlad and Echanis which is the reason why they were included in the recent SC resolution.

The two, charged with multiple murder in a “mass grave” case in Leyte has been out on bail since 2012 and 2009 respectively. They are actively involved in preparing for the resumption of the formal talks on August 20 in Oslo, Norway. Ladlad has been a consultant since 1994 while Echanis is a member of NDFP’s Reciprocal Working Committee on Social and Economic Reforms.

Atty. Olalia explained that the restrictions include requiring Ladlad and Echanis’s participation in the talks and restricting their freedom to six months, submitting their addresses, and report to Norway’s Embassy.

In a joint statement, Atty. Olalia and Atty. Pastores, both legal consultants of the NDFP said that they view the resolution as a serious concern that additional restrictions were imposed on the two NDFP consultants that may impact their free and unhindered participation in the peace negotiations.

However, despite not directly granting the release of the first set of NDFP consultants, they welcomed the Court’s Resolution in general “as a clear guidepost or signal and significant impetus for the latter’s possible eventual release.”

Also on a positive note, Atty. Pastores said that because of the SC resolution the Regional Trial Courts (RTCs) can suspend the tedious process and follow the SC rule on granting bail and release order without following the usual process.

In the same peace forum, NDFP Chief Political Consultant Prof. Jose Maria Sison said that confidence on the Duterte admin would rise if all political prisoners will be released under general amnesty which will be responded with an interim ceasefire.

According to Karapatan, there are 525 political prisoners detained all over the country that are charged with “trumped up” criminal charges. Among these, 22 are NDFP peace consultants and JASIG-protected individuals, 47 elderly and sickly and 45 women including Miradel Torres who was four months pregnant when arrested in 2014 and gave birth while in incarceration.