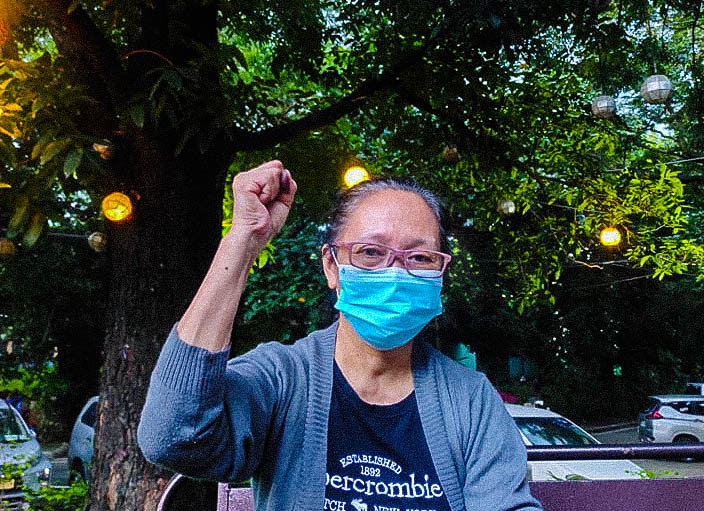 Peace consultant and Gabriela Metro Manila campaign officer Esterlita Suaybaguio was released on September 17  after Judge Janer Abergos-Samar of Quezon City Regional Trial Court (RTC) Branch 219 acquitted her of illegal possession of firearm and explosive charges by police who raided her home pre-dawn and arrested her on August 26, 2019.

The decision said the prosecution failed to prove that Suaybaguio had no authority to possess a firearm and a hand grenade. The judge also pointed out that the police said that the gun’s serial number was registered to a security agency.

Suaybaguio’s legal counsel, the Public Interest Law Center (PILC), welcomed the decision as a “triumph over a policy of filing trumped up charges against activists, and particularly, peace consultants.”

“Her acquittal adds to the victory in a string of cases against activists which have been recently dismissed, such as similarly trumped-up charges of illegal possession of firearms and explosives against journalist Lady Ann Salem and spouses Alexander and Winona Marie Birondo,” said PILC in a statement.

Suaybaguio spent more than two years in jail at the Bureau of Jail Management and Penology (BJMP) Female Dormitory in Camp Karingal, for a large part under lockdown that also had very restrictive conditions before the verdict proved her innocence against police claims.

Various human rights and lawyers groups have asserted that Suaybaguio’s incarceration was a violation of the Joint Agreement on Safety and Immunity Guarantees (JASIG), one landmark agreement in the over 30-year old peace negotiations between the Government of the Philippines and the National Democractic Front of the Philippines.

Strings of killings and several arrests of peace consultants on the usual illegal possession charges were observed to happen after President Rodrigo Duterte unilaterally terminated peace talks in November 2017 after signing Proclamation No. 360.

Suaybaguio was the second peace consultant to have walked free. Similar illegal possession charges against Raffy Baylosis was dismissed in January 2019.

Peace consultant Lora Manipis along with her husband Jeruel Domingo, NPA commander in Sarangani and South Cotabato, have been missing since February 2018.

Peace consultant Adelaida Magpatoc was arrested in Bukidnon a day before Suaybaguio’s release.