Protests were held simultaneously at the MRT North Edsa station and LRT stations Recto and Monumento. The protesters gathered at the stations to explain to passengers the reason behind the fare increase. Hand clapping was initiated as a form of protest against the fare hike.

Train commuter group RILES Laan sa Sambayanan or RILES Network spokesperson Sammy Malunes said the fare hike was “treacherous” because it was done at a time when Filipinos are busy preparing for the Holiday season. RILES Network, in its WordPress account, describes its network as “advocates for affordable, accessible and efficient mass transport service.”

The fare hike became effective on a Sunday, January 4. The Department of Transportation and Communication (DOTC) announced the said implementation on December 20, 2014.

During a protest on January 4, Bagong Alyansang Makabayan (BAYAN) Metro Manila Secretary General Mark Louie Aquino denounced the announcement of the fare hikes “done amid the holiday rush, a treacherous and scheming move of PNoy’s administration.”

“Equally scheming is the first day implementation being a Sunday, when there are less people who ride the train compared to a weekday and on January 4, a day before students, government employees and some private sector workers were scheduled to go back to work from the long holidays,” Aquino added.

Kilusang Mayo Uno chairperson Elmer “Bong” Labog criticized the government for approving the fare hike. The previous year saw the many different hazards of MRT operations and lack of train coaches causing daily long queues and accommodations like a can of sardines.

Labog further added that workers will suffer most from the fare hike because they are meager minimum wage earners. Workers in Metro Manila currently P466 daily minimum wage, but lower for contractual and casual workers. They stand to lose P20 to P26 per day due to the fare hike or P420 to P620 per month in a 24-day work-month.

Citing the country’s experience with the privatization of the power and water industries, the labor leader said that “selling the country’s assets would only benefit corporate interests rather than the public’s welfare”.

Where will money from fare hikes go?

This is besides the government subsidy, which also comes from people’s money.

The DOTC has been asked where the fare hikes will go and several groups have also called to “open the books” of the train systems.

Research think-tank Ibon Foundation says that based on latest available data, only 19% of the expenses of MRT goes to operations and maintenance while 81% goes to the financial obligations of the government from its Build-Lease-Transfer contract with the privately-owned MRTC. The financial obligations include guaranteed annual 15% return on investment (ROI) of the MRTC in the form of equity rental payments (ERP), as well as the settlement of MRTC’s tax liabilities. For LRT 1 and 2, bulk of the expenses or around 47% goes to their debt servicing.

“But what makes the fare hike more unjust, particularly in the case of LRT 1 that has been recently privatized, is that the people will bear an increasing share of the debt-servicing burden even as the system generates private profits for the consortium of the MVP-Ayala group and their foreign partners,” IBON concluded.

Sammy Malunes of RILES urged passengers of the LRT to utilize their Facebook and Twitter accounts to voice their opposition against the fare hike.
#StrikeTheHike Network encouraged commuters to do a selfie protest, wherein passengers would take pictures of themselves in the MRT with a thumbs-down sign.
Last December, Palanca awardee Angelo Suarez and choreographer Donna Miranda and launched #PakyuMRT. An online campaign in which commuters of the mass transport system are encouraged to raise their middle finger at various CCTV cameras positioned across the railway network to show their disgust against the fare hike. The screengrab of the CCTV will then be posted online. Train Riders Network (TREN) a broad alliance of citizens against the fare hike later teamed up with the couple and adopted the campaign.

Akbayan Partylist, a partylist allied with the Liberal Party, was criticized for its inaction regarding the fare hike. “Nasaaan nga pala ang Akbayan sa panahong tumataas ang singil sa pasahe ng MRT at LRT?”(Where is Akbayan at the time of fare hike?) BAYAN Secretary General Renato Reyes posted on his Facebook Account. Akbayan was in the past by BAYAN for its alleged close ties to Malacanang.

Bagong Alyansang Makabayan (BAYAN) led the filing of Temporary Restraining Order at the Supreme Court Building earlier to stop the fare hike.
Signatories of the said petition comprise leaders of different people’s organizations and advocates against the fare increase.

“It is stated in the LRT Charter that the transport system should be economical,” Robles said.

“An efficient transport system is vital as it would help spur economic activity,” he added.

The petitioners were assisted by a team of rights lawyers from the National Union of People’s Lawyers (NUPL). In a statement, the NUPL described the fares as “treacherously imposed during the season of hope and did not satisfy fundamental requirements of due process, publication and hearing.” 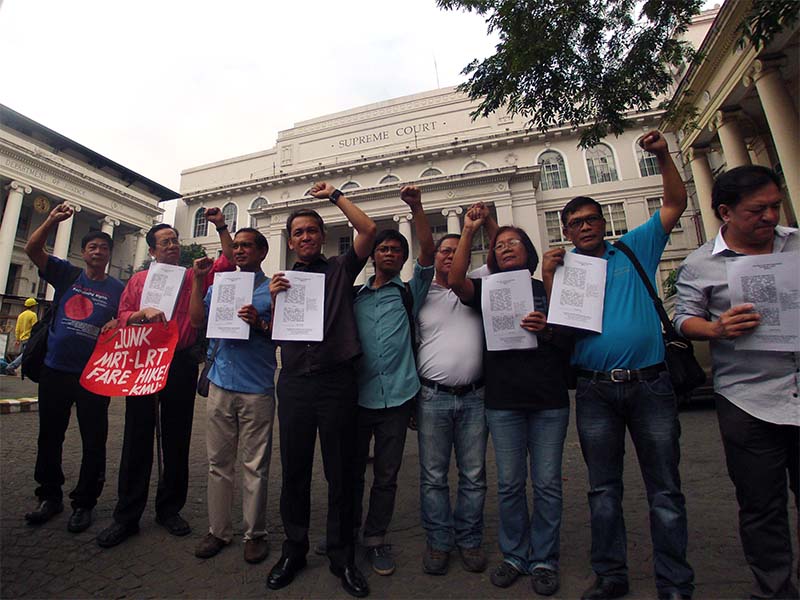 Renato Reyes, BAYAN National Secretary General said that the fare hike will only benefit private stakeholders of the train system citing the privatization of the LRT 1 in favor of the Ayala Corporation and Metro Pacific Investments corporation.
Light Rail Manila Consortium (LRMC), a joint venture between Ayala Corporation and Manuel Pangilinan’s Metro Pacific Investments Corporation inked a P65B deal with the DOTC for the LRT 1 Cavite Extension Project. The project is the biggest deal under the Public-Private Partnership scheme of President Aquino.