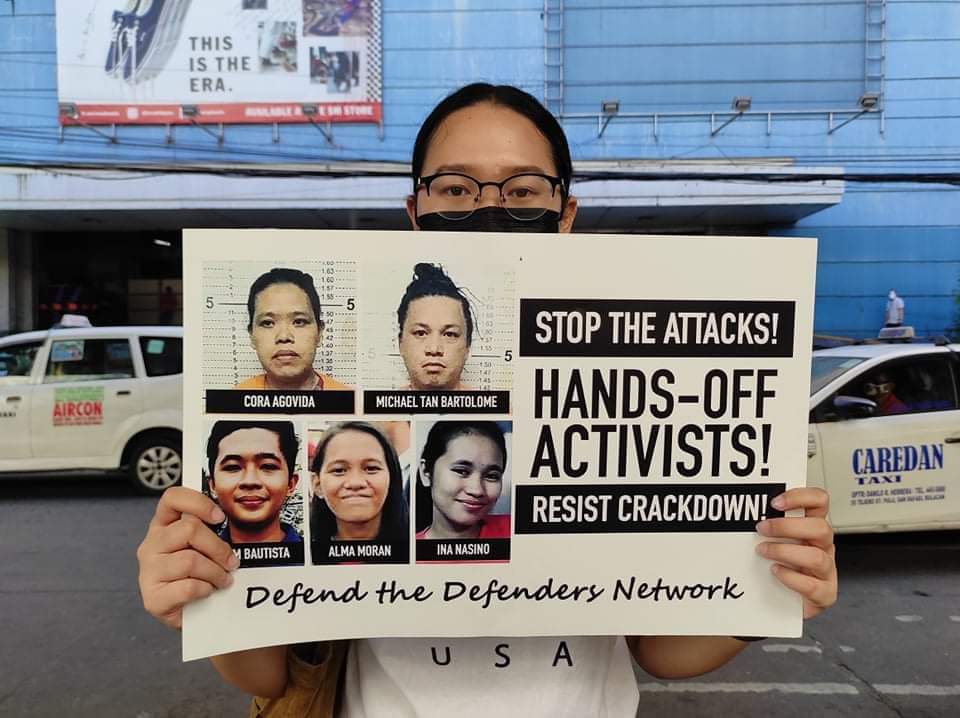 On March 2, human rights advocates and supporters staged a protest in front of Manila City Hall to reverberate anew the release of Cora Agovida and Michael Tan Bartolome along with the rest of five activists from Manila.

Activist couple Cora Agovida of Gabriela Manila and Michael Tan Bartolome of Kadamay Manila were apprehended inside their home with their 10-year old and 2-year old sons only five days earlier to the arrest of Reina Mae Nasino, Ram Carlo Bautista, and Alma Moran whom are arrested in Bayan Manila office in Tondo. They were dubbed as the Manila 5.

According to the protesters, the crackdown against activists has always been marred with illegal raid operation through a fabricated search warrants issued by the controversial Judge Cecilyn Burgos-Villavert of Quezon City on the basis of firearms and explosives charges that, as the group twitted, are all evidently planted.

Subsequent to the protest action was the hearing over the alleged charges against the activist couple in Manila Regional Trial Court of Branch 19. The said hearing will entail a cross-examination of witnesses. On the other hand, the court hearing for the rest of Manila 5 is also scheduled today; however, it was put to reset because of a pending certiorari regarding a motion to suppress evidences which was filed at the Court of Appeals.

“More than a year of paying for uncommitted crimes has passed for Manila 5 since the fake charges against them have been made only to suppress their utmost dissent. This urge the rights groups and institutions to further call for justice,” said one of the protesters.

Karapatan Metro Manila spearheaded the said protest action and demanded for a clean investigation on the cases of political prisoners and a righteous decision for the victims of state repression.