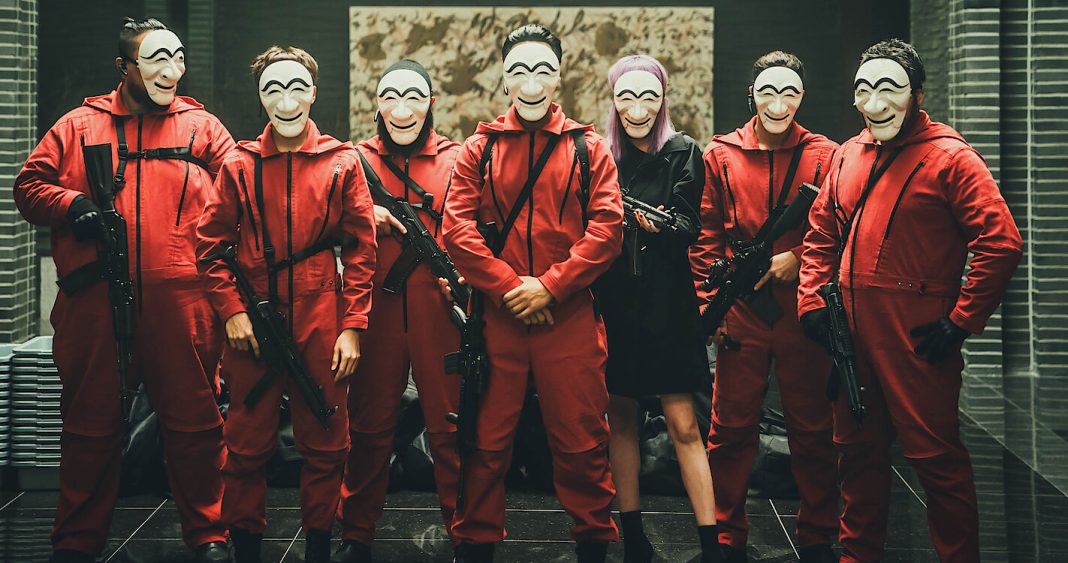 The original Money Heist series from Spain, a Robin Hood tale set in modern-day capitalism and a world that has experienced one financial crisis after another, was a global entertainment success like no other. It not only put subtitled or dubbed entertainment on TV streaming on top but also dominated pop culture when it hit Netflix as fans around the world devoured every bit of it (costumes, masks, songs, shoot locations, memes, etc.). It was a cultural phenomenon in its own right—a non-English TV series that people of different languages, cultures and country and societal contexts were able to relate to and feel an interconnectedness with. If the themes of resistance (the anti-fascist partisan song ‘Bella Ciao’ that is woven throughout the series became a hit overnight), defiance against the world order that salvages the rich by way of oppressing the poor further is what made it more universal—just like in the world we live in today—then that made all the hype and fanfare (or stan) more meaningful, albeit the anarchist, anti-social methods of the protagonists.

After a series of hit Korean films like Parasite and TV shows like Squid Games, there is every reason to get excited for a Korean adaptation of Money Heist. But the adaptation may have fallen short for being too faithful to the original while also feeling too contrived for being set on a fictional Joint Economic Area or JEA (the Demilitarized Zone between North Korea and South Korea became the JEA during the  reunification).

Money Heist: Korea is an almost scene-for-scene recreation of its Spanish counterpart in the first few minutes of episode 1. The heist here unraveled faster than the original, but that cannot be said to work for this series as the first episode feels slow and lacks energy. Audiences would have usually wanted movies or series to move at a fast(er) pace, but this one sacrificed the tension, the character development melded in the drama in between the development of the heist. It did not stop to smell the roses to show what really drove the heist forward to its outcome, what made viewers of the original hang onto every development, what made them love even the most villainous characters like Berlin, and what gave the actors their great acting moments.

The gang is back with the same names, red suits and masks, and similar physical traits to the original. Even this gang’s Oslo and Helsinki are big, shaved head men. Tokyo is again the lead character and narrator, though she seemed to have lesser motivation for joining the heist than Tokyo in the original series (and that got a huge payoff at the end).

As mentioned, the series, the heist takes place in a fictional setting. Because of such a choice, it was unable to capitalize on mirroring the conditions in its society that could be parallel to that of other countries (what made the original feel universal), to take to task the rich-poor gap for example, as Parasite and Squid Games did to the surprise of foreign fans caught up in the hallyu wave, mostly in Kpop. Being involved in corruption controversies or failure to deliver on promises was enough for top leaders in South Korea to resign (the same cannot be said for the Philippines, where ‘delicadeza’ is supposedly a virtue passed on over centuries) and the series could shade on things like that but didn’t.

Despite the undertones for aspirations for reunification, it comes with quips on North Korea, similar barbs from outsiders who do not believe in North Korea’s societal system and fault them for it and evens this out with some criticisms of South Korea. Both countries are imperfect, but not on equal terms. The series goes further with background stories of villainous characters from North Korea that the north would probably consider black propaganda, e.g. children’s prison camps.

The Korean series had ideas on how it wanted to improve on the original. Or maybe answer some questions they wanted the original series to answer, or maybe plug in what they thought were plot holes in the original. For one, there are so many mealtime scenes shown. While it will help show that people in these situations still do need to eat, these scenes do not really do anything to help move the story forward.

One deviation from the original Spanish series is how the ambassador’s daughter is a popular kid and not an outcast, and was not victimized by a sensitive photo of her taken and shared without her consent, which is said to be a current sensitive issue in South Korea.

Another is that the Korean version also built a longer timeframe for the romantic relationship between the inspector and the professor before the heist started to maybe establish the depth of their feelings for each other getting in the way of their opposing objectives. But this would make the inspector here more gullible than the inspector in the Spanish series for being conned longer.

The story moves slowly from one character to another (or not at all with some like how Tokyo kind of disappeared in episode 2 or appeared at the end of it) and a lot of them almost do not get any speaking line at the first 3 episodes (Oslo got beaten up by one of his fellow robbers without so much of a dialogue and back story).

Given that we already know what happened in the original and this is a remake, there were no ways to change things up, there are really no surprises and cliffhangers.

Everything less than how the original was good in a lot of aspects, or whatever new they came up with just seems to fall short of the original or of being believable (like the fallout of the Moscow-Denver outside the mint scene)

The main difference between this series from the Spanish original is that the characters are Korean and set in a fictional place between the two Koreas. But it lacked so much in localizing the story to give viewers and fans of the original Spanish series something new to look forward to.

However the series want to go about the second season, we hope it can bring back the themes and feels of the original, especially during a time of global crisis as we see this year more armed conflicts between countries, record-breaking inflation and devaluation of currencies that would all redound to greater suffering of ordinary people in the world over. That may be a huge task, but it might be the singularly important one in adapting a series such as Money Heist.