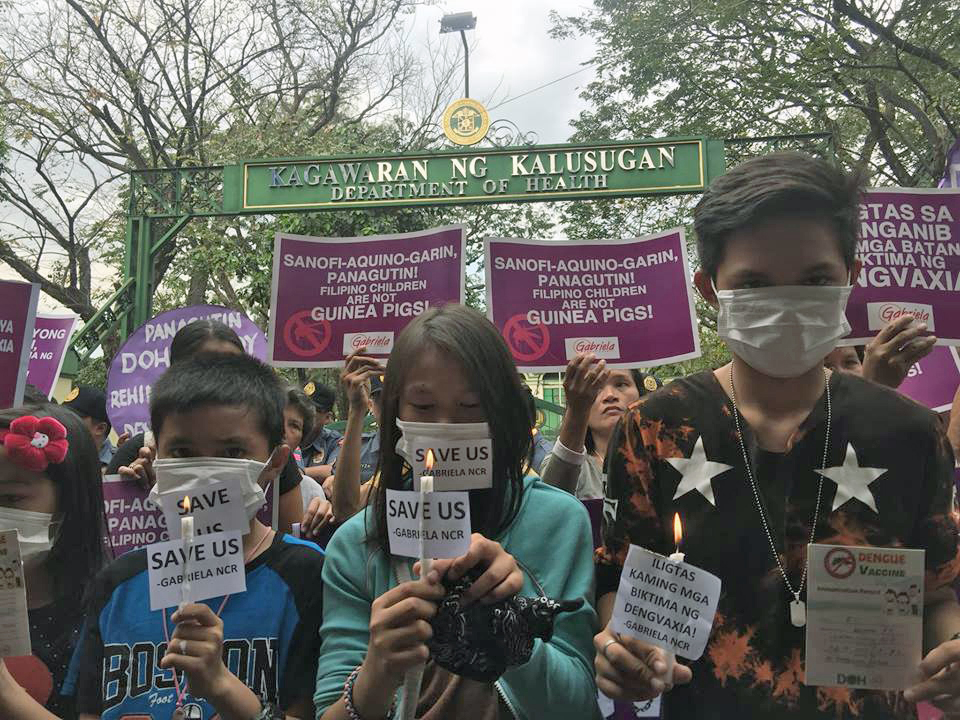 Militant women’s group Gabriela Metro Manila today said that the welfare and the best interest of all the Filipino children vaccinated with Dengvaxia must be at the center of all the ongoing investigations on the fiasco hounding the anti-dengue mass vaccination program. The group made the statement as they criticized various public hearings and probes being conducted by different government institutions over Dengvaxia.

The women’s group said that all the investigations being held “were missing out the point of providing concrete measures that will give the victims and their parents assurance that victims will be saved from the dangers of Dengvaxia.”

The various hearings, the group heeded, might only provide a venue for political maneuvering against the current opposition party who was the previous administration that approved Dengvaxia. The group feared there would only be sizing up and finger pointing, but in the end nobody may be held accountable as in many controversies involving big politicians.

The group led children vaccinated with Dengvaxia and their parents hold a protest-dialogue at the Department of Health (DOH) Main Office in Manila.

Hundreds of cops from the Manila Police District blocked the gates of the DOH compound to keep protesters off the agency’s grounds.

Protesting children and parents wore face masks printed with the message “Save US.” They lit candles at the gate of the DOH office to call for justice for all the victims of the Dengvaxia fiasco.

The women’s group also denounced the ‘poor response’ of the Duterte government over the issue.

Protesters also slammed the inaction of the Health Department for its lack of relevant supports and assistance from the government to the 870,000 or more victims of Dengvaxia.

Gabriela Metro Manila said that nothing significant has been offered by the Duterte government to the innocent victims for which the government, be it the previous administration, spent P3.5-billion from the people’s coffers.

“The information we gathered from our almost two months of conducting our Dengvaxia Watch campaign and hotlines clearly showed that it’s still the parents of the vaccinated children who pays for the check-up, laboratory tests and medications. These expenses cause addition to the burden and trauma that they have been suffering due to the controversy,” Cora Agovida, Gabriela Metro Manila spokesperson said.

Agovida added that the Duterte government should immediately heed the demands of the victims and their families for financial and medical assistance.

They also urged the government to provide justice and indemnification for the victims of Dengvaxia, especially those who perished in direct relation to receiving the Dengvaxia vaccine.

Gabriela Metro Manila also demanded full accountability of all those involved in the Dengvaxia controversy including former President Aquino, and all his officials concerned in the issue, whose deal with French pharmaceutical company Sanofi Pasteur deemed anomalous by the public. They also wanted to hold President Duterte and the Department of Health accountable for continuing the said vaccination program.

“In order for us not to commit this same mistake in the future, the government should not rely on dangerous foreign pharmaceutical companies but develop safer local medical industry instead,” Agovida insisted.

In the meeting, Laxamana explained the efforts of the agency in dealing with the issue of dengue and Dengvaxia. The health official reiterated the DOH’s 4S anti-dengue program (Search and destroy, Self-protection measures, Seek early consultation, and Say no to indiscriminate fogging), which Gabriela Metro Manila already declared ‘obsolete.’

Laxamana also admitted that no master-list of children vaccinated with Dengvaxia has been finalized yet. Children immunized with Dengvaxia should also have a DOH monitoring card (DMC) that should serve as their “passport for medical assistance on government hospitals and health centers.”

She also encouraged parents to ensure that names of their children will be on the government’s master-list so that they can avail of free medical assistance covered by the Philhealth and ‘health kits’ that she said is now on the procurement process and will be available next week.

Laxamana assured the parents, “All expenses of children vaccinated by Dengvaxia in government hospitals, whether done on schools, barangay halls and at home will be absolutely free. If charges will be made, you can report it to our office for further action.”

She also assured parents that aside from Philhealth coverage, there are also funds available for medical assistance program for poor families and Dengvaxia victims and health benefits from the Department of Education and different local government units.

Laxamana also told parents to be positive in dealing with the issue of Dengvaxia. She insisted that politics should not have a place in resolving the problem because it is the welfare of their children that is at stake.